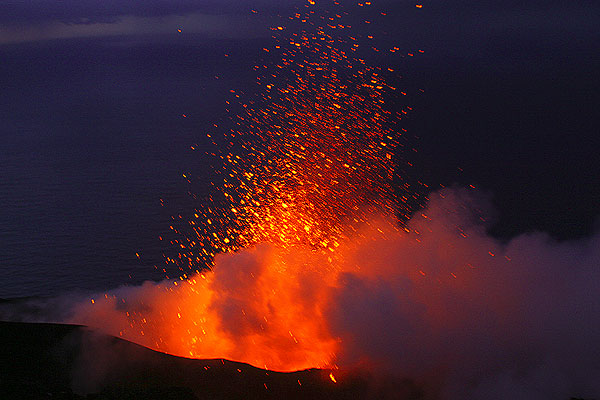 Stromboli continues to be very active. Loud eruption noises are frequently audible all over the island. On a visit by VolcanoDiscovery team members Karen and Tom on the afternoon of 30 Dec. 2005 the following activity was observed:
One active vent in the West crater produced tall, candle-like strombolian eruptions in intervals of 10-15 minutes, throwing incandescent material up to 200-250 m above the crater. 3 vents were active in the central crater, all of them glowing constantly, and relatively strongly spattering; small boiling lava lakes present few meters below the crater rim can be inferred. The northermost of these vents, forming a tall cone, also had strong strombolian eruptions at irregular intervals of 5-25 minutes, throwing lots of very hot, incandescent bombs to up to 100-150m elevation, frequently outside the crater complex. At least one vent was active in the NE crater, which unfortunately was today completely hidden by fumes. It did not erupt visible bombs, but every 10-20 minutes it produced loud hissing noises; we assume that it erupted mainly gas.

Soputan volcano had a small phreatic eruption on 26 December around 12h30 local time, probably caused by heavy rainfall onto the hot lava dome. On 27 December at 0400, a Strombolian eruption began that lasted ~50 minutes. Incandescent volcanic material was ejected ~35 m, and avalanches of volcanic material traveled as far as 750 m E. Around 06h40 the avalanches became larger, as pyroclastic avalanches occurred from the edge of the lava. The avalanches extended 200 m E, and booming noises were heard as far as 5 km from the summit. The Darwin VAAC reported that an ash plume reached a height of ~5.8 km (~19,000 ft) a.s.l. and drifted SE. 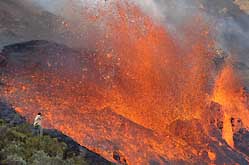 Lava fountains and flows from the eruptive fissure near Le Nez coupé de Sainte-Rose in the upper parts of the Grandes Pentes of Piton de la Fournaise volcano. Photos from the website of "Le Journal de l´Isle" (www.clicanoo.com).

Piton de la Fournaise erupted again on 26 December, with a first fissure opening at the base of the summit cone, and a second one just below the slope break of the Grandes Paintes (the steeper slope of the caldera towards the ocean), between 1500 and 1600 m elevation. Lava fountains are emerging from the eruptive fissure and several lava flows are travelling down the slope in direction to the ocean, having reached around 2 km away from the ocean as of Dec. 29. 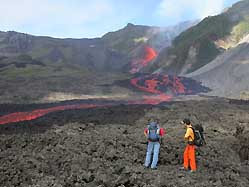 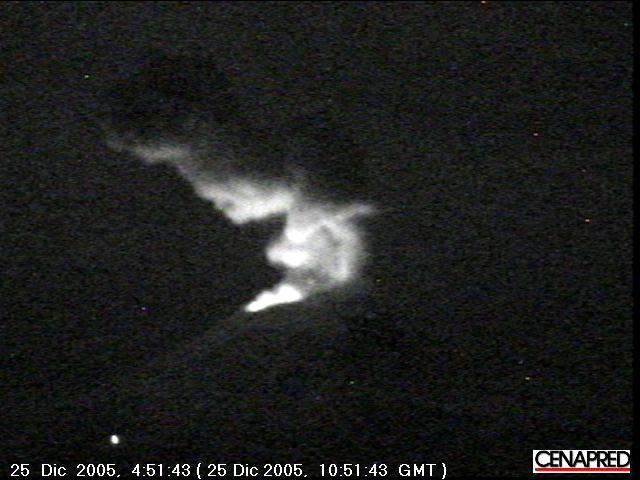 Eruption of Popocatepetl on Dec. 25, 2005 (image from CENAPRED's webcam)

Popo sends his Christmas greetings with a moderate explosion that produced an ash column of about 2 km height and showering the volcano's top with incandescent fragments early in the morning of Christmas Day (Dec. 25, 2005).

Eruptive activity at Manaro volcano continues, but has decreased significantly over the past week. Scientists are monitoring the eruption, hoping that it will soon be possible to lower the alert level and permit some 3000 residents that had been evacuated to return to their homes.

Pearl of the Aegean
Santorini is one of the most beautiful islands in the world, famous for its breathtaking sea-filled caldera and picturesque villages. Discover its fascinating natural and cultural history on a relaxed walking study tour with us.
Continental rifts

Divergent plate boundaries on continents
Learn about the process of breaking up continents along continental rift zones.
Santorini Geology

Photos from the Kuril Islands
Some rarely visited volcanoes, unspoiled nature, lots of WWII remnants - browse through several galleries from our tours to the Kuril Islands.
Get the ad-free version!
Why is there advertising on this site?