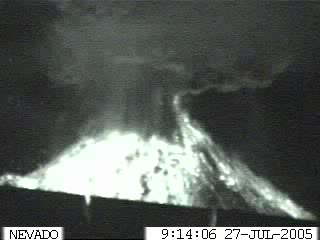 Image captured from the webcam at Colima volcano, showing the powerful explosion on the early morning of 27 July.

Colima's Volcano of Fire had a spectacular, predawn explosion Wednesday 27 of July, shooting incandescent rock, ash and steam nearly 9,000 feet into the air over western Mexico. The eruption sent ash raining down on nearby communities, but officials had no reports of major damage.

Fuego volcano had a small explosive eruption on 17 July that produced an ash plume reaching a height of 3.5-4 km above the crater and producing small pyroclastic flows that traveled down Santa Teresa and Taniluyá ravines.

Volcano Trip
Guatemala is a country with spectacular volcanic activity, wonderful landscapes, colorful villages and towns, friendly people.
Join a trip organized by an experienced Guatemalan guide and photographer Diego Rizzo together with VolcanoDiscovery to have a chance to watch the active volcanoes (Fuego and Pacaya) from up close! Get an in-depth experience of the powerful and turbulent natural processes at work and take stunning pictures!
Vulkane Italiens

Volcano Calendar 2019
We're proud to present our 2019 volcano calendar: 13 different and attractive images of volcanoes, volcanic landscapes and phenomena taken during volcano tours over the past few years.
Volcano Webcams

Latest volcano webcam image
Many volcanoes can be observed in real-time using webcams. Look at the latest images collected from our volcano webcam viewer tool.
Erta Ale eruption
Overflowing lava lake Jan 2017
Get the ad-free version!
Why is there advertising on this site?