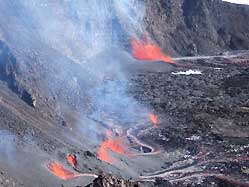 Piton de la Fournaise volcano, La Réunion Island, erupted again for the third time this year. Here the original report from the volcano observatory:
"Immediately after the last eruption in the Dolomieu crater, the permanent GPS network and extensometer network of the "Observatoire volcanologique du Piton de la Fournaise" continued to show strong surface deformations, indicating the preparation of a new eruptif event. Today, November 29, at 0559 in the morning a seismic crisis started and at 0625 eruption tremor indicated the beginning of the third eruption this year. A first vent opened in the western Dolomieu for about 3 hours. A second vent opened on the north flank with a main emission point at 2370 m altitude. Very few lava projections were visible, however a rapid and large lava flow went down the flank in direction of Piton Kapor. Further observations were impossible due to clouds, fog and rain."

Karymski is getting more and more restless. Steam and ash eruptions with plume heights of up to 3,300m above the crater continue, while an increase in seismic activity is being recorded: according to news reports, a swarm of 130 tremors occurred under or near Karymsky volcano today and there are strong thermal anomalies as well. An escalation of the current eruption cannot be excluded to occur any time now.

Karthala volcano on Comoros Island erupted for the second time this year on Thursday 24th of November. Ther eruption was probably phreatic and caused by vaporization of ground water in contact with a shallow magma body underneath the crater. Substantial ash falls caused problems in the nearby capital Moroni, where authorities ordered water tankers into the streets to wash away the thick blankets of white ash from the eruption.

Galeras volcano started erupting on the morning of Thanksgiving Day (Thursday 24th of Nov. 2005) with a moderate (phreatic?) ash eruption that lasted 30 minutes and produced heavy ash falls on the city of Pasto, about 18 km (12 miles) away. There were no seismic precursors according to Colombia's Volcanology Institute. 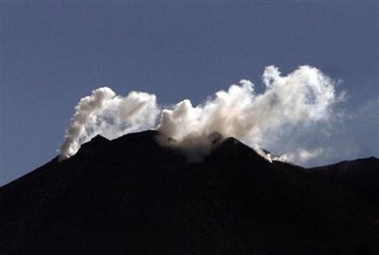 Galeras volcano, 330 miles (ca. 500 km) southwest of Bogota, is emitting dense plumes of steam and producing characteristic volcanic tremors (so-called tornillos), making an impending eruption likely. 9000 people have been ordered to evacuate their homes, many of them refusing to leave.

Photos from Mt Bromo in eruption during 2010-11
The most recent eruption of famous Mt Bromo volcano in East Java, Indonesia.
Earthquakes

Volcanoes & Earthquakes
Look up active volcanoes and earthquakes worldwide on our web-app, featuring an interactive map you can embed on your website or use as stand-alone tool.
Greece earthquakes