Map of the extent of the ash plume, as of early 28 Feb., from Manam volcano's explosion of 27 Feb. Source: VAAC Darwin.

On the morning of 27 February 2006, at 7:33 GMT, Manam volcano had a lvery arge, probably Vulcanian or sub-Plinian eruption. As the VAAC Darwin reports from satellite and pilot observations, a mushroom eruption cloud reached about 18-20 km height a.s.l.. and has already spread over a vast area around the volcano, mainly to the N. This eruption might be a similar event as the large explosion on 27 January 2005. Thousands of people from ths island have been evacutated since Nov. 2004. Since the volcano's activity began to increase in Nov 2004, thousands of people from the small island of Manam have been evacuated. 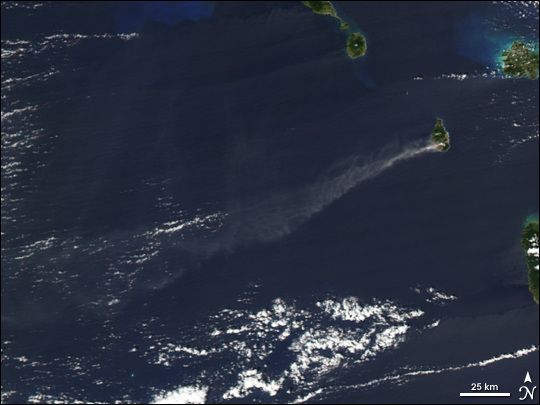 The ash plume of an explosion of Soufrière Hills volcano on Montserrat on February 16, 2006. The ash drifted westward over the Caribbean Sea and over the U.S. Virgin Islands and parts of Puerto Rico. Image: taken by the Moderate Resolution Imaging Spectroradiometer (MODIS) flying onboard the Aqua satellite. NASA image created by Jesse Allen, Earth Observatory, using data obtained courtesy of MODIS Rapid Response team.

The lava dome of Soufrière Hills continues its relaitvely rapdid growth. The youngest lobe appeared on the northwestern side on 10 February and has continued to grow on all sides. It now appears to have infilled the gap between the dome and the northern and western crater walls, which means that it is likely to produce potentially dangerous pyroclastic flows. It has also grown significantly to the east, over-topping the older lobe by the end of the reporting period. Incandescent rockfalls can be seen at night, and since 22 February these have coursed down the northern, eastern, and southwestern sides of the dome and into the Tar River valley.

Although new eruptions could not be observed due to bad weather, some explosion-type earthquakes were erecorded at Mayon over the past days. It is therefore likely that minor phreatic explosions do continue at Mayon, which is also apparent from confirmed reports that rumblings were heard by local residents in Sta Misericordia. Alert level remains at "2", meaning that the public is strongly advised to remain out of the declared danger zone of 6 km around the volcano.

Strong strombolian activity at Karymsky volcano continues as KVERT reports. A large thermal anomaly over the crater, identifiable by satellite, persist and numerous ash plumes extending about 11-117 km (6.8-72.5 mi) to different directions from the volcano were observed over the past days.

No significant changes at Augustine. The eruption is waning, seismicity decreasing and emissions of ash as well as incandescent rock falls from the lava dome are becoming more and more infrequent.

Pacaya continues its slumber. Only a weak steam plume of about 150 m height is visible above its crater.

Ash venting producing plumes of up to 1500 m and small incandescent pyroclastic flows from the east rim of the growing lava dome continue at Santa Maria volcano. The pyroclastic flows produce a lot of fine ash suspended in clouds of about 1 km height that can remain suspended for hours. The ash clouds are drifted mainly to the southeast.

Fuego continues its low-level strombolian activity. 27 small strombolian explosions were recorded today, ejecting incandescent blocks to up to 50 m above the lava dome. Minor rock falls from the sides of the dome produce small blaock and ash flows into the barrancas Santa Teresa, Taniluyá and Trinidad.

Activity at Augustine Volcano continues at low levels. Rockfalls and avalanches from the lava dome continue to be recorded by AVO seismic stations. Occasional small explosions produce small plumes of steam and ash. Satellite views of the volcano show a persistent thermal anomaly in the summit area, consistent with the location of the lava dome.

Tungurahua's activity might be increasing. On the 18th of February, aircraft observation confirmed ash at around 6 km (20,000 ft.) moving north. Moderate ash explosions cause light ash falls in areas around the volcano.

Santa Maria volcano in Guatemala continues to be the most active volcano in Central America at this time. Ash explosions from the lava dome are occurring frequently and produce plumes of  typically 300 - 1500 m height as well as pyroclastic flows descending from the crater of the Domo Caliente. These flows produce clouds of very fine ash that causes respiratory problems in the vicinities of the volcano. Ash plumes from the volcano are dominantly transported in SW directions.

See volcano pics from our trips
Lava and water