The 4th eruption of Piton de la Fournaise volcano starting in 2005 ended "ufficially" on 19 January 2006, after eruptive and seismic activity had been gradually declining over the past weeks.

After several smaller explosions similar to the initial ones during the past days, Augustine Volcano seems to become even more active. Tuesday morning, an eruption produced an ash plume that reached 8 1/2 miles (ca. 13 km) height above sea level.

Half a month into 2006, eruptive activity at Pu`u `O`o continues unabated. Several vents within the crater continue to be active and glow is frequently visible on clear nights. Lava is still flowing through the PKK lava tube from Pu`u `O`o to the ocean, with a scattered surface breakout flows that are intermittendly active near Pu`u `O`o itself, on the steep slopes of Pulama pali, above the coastal plain, and just above the coastal plain before the lava enters the sea. 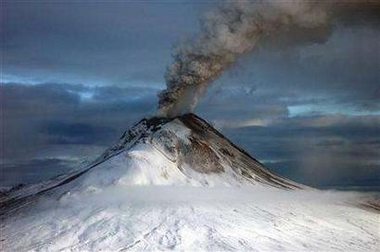 Two more explosions occurred from Augustine volcano on Jan. 12, 2006, producing ash plumes that rose to up to 5 miles (ca. 8 km) above sea level.

Augustine volcano has calmed down a bit, and the USGS lowered the alert level from RED to ORANGE. Seismic activity has declined since yesterday's eruption but remains elevated above background and the volcano continues to steam vigorously. AVO reports steam and minor ash emissions from a new vent on the 1986 lava dome, producing a plume reaching an estimated height of 8000 to 10,000 ft (2400 to 3050 m) above sea level. Field observataions confirmed mudflows (also visible in the on-island web camera) on the flanks of the volcano. These flows are the likely source of false reports of new lava flows on the volcano. 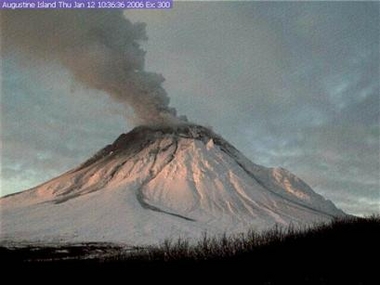 Update: according to news sources, the eruption DID take place and an ash plume rose to a reported height of about 5 miles (8 km) into the sky. A weather service flight advisory was issued for pilots for an area 20 miles east and west of the volcano and about 50 miles north.
As the AVO reports a few minutes ago, "at 4:44 a.m. (AST) this morning, AVO began recording seismic signals interpreted as explosions at the summit of Augustine Volcano that likely mark the onset of an eruption. The current activity may be emitting ash, steam, and volcanic gases." The color code for Augustine has been raised to RED.
For more details and current information, please visit the Augustine page at the AVO.

Chikurachki (Paramushir Island): The explosive activity at the volcano has been renewed again after exactly one week as the recent eruptive period stopped. ... Read all
[enlarge map]
Volcano Statistics

Books about Volcanoes
A selection of great books about volcanoes and volcanism, grouped into sections of different reading level interest.
Volcano Calendar 2019

Volcano Calendar 2019
We're proud to present our 2019 volcano calendar: 13 different and attractive images of volcanoes, volcanic landscapes and phenomena taken during volcano tours over the past few years.
Volcano Tour

Ambrym+Yasur volcanoes in Vanuatu
An adventurous expedition to some of the most spectacular and active volcanoes in the world! Our volcano expedition to Vanuatu lets you spend 1 week on Ambrym with its multiple active lava lakes and 4 days on Yasur, famous for its spectacular fireworks. Guided by professional volcanologist, small groups (May-Sep).
Yellowstone quakes

Photos of lava flows
Get the ad-free version!
Why is there advertising on this site?
Support us - Help us upgrade our services!
We truly love working to bring you the latest volcano and earthquake data from around the world. Maintaining our website and our free apps does require, however, considerable time and resources.
We need financing to increase hard- and software capacity as well as support our editor team. We're aiming to achieve uninterrupted service wherever an earthquake or volcano eruption unfolds, and your donations can make it happen! Every donation will be highly appreciated. If you find the information useful and would like to support our team in integrating further features, write great content, and in upgrading our soft- and hardware, please make a donation (PayPal or Online credit card payment).