Soufrière Hills volcano's dome growth continues, now focused towards the east, with a lava lobe growing in that direction and the majority of rockfall and pyroclastic flow activity occurring in the SE to NE sector. The largest pyroclastic flows during the past week have travelled up to 2km down Tar River valley. 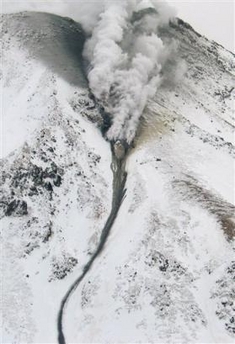 After the 17 March eruption at Green Lake on Raoul Island, no new eruptions occurred and seismicity declined through 24 March. New Zealand scientists found that many new craters had formed in and around Green Lake and that pre-existing 1964 craters had eactivated. The main steam columns were derived from Crater I, Marker Bay, and Crater XI. The eruption blew over mature trees as far as 200 m from the eruption site and deposited dark gray hydrothermal mud and ballistic blocks.

Pacaya volcano is in mild strombolian activity, with lava flows extending  ~100-150 m down the volcano's S and SW flank.

Small phreatic eruptions began at Poás on 24 March 2006. The eruptions originated from the bottom of the volcano's Caliente Lake. Witnesses described a sudden emission of water and sediments S of the lake. Roaring was heard in a nearby tourist area and weak earthquakes were felt.
OVSICORI-UNA visited the E side of the volcano on 25 March and confirmed that water, blocks, and sediments from the bottom of the lake had been ejected.Several dozens of impact craters were seen with diameters between 15 and 60 cm, extending E as far as 700 m. Blocks were found that ranged in diameter from a few to 50 cm wide. During 22-27 March, harmonic tremor was recorded. On the 27th, there was a reduction in seismicity and it returned to normal levels. No deformation was measured at the volcano. A news article reported that the area around the volcano was closed to visitors.

Galeras has been showing an increase in tremor since the morning of 28 March, as INGEOMINAS reports. The Alert Level was raised from 3 ("changes in the behavior of volcanic activity have been noted") to 2 ("likely eruption in days or weeks"). In addition to the tremor, seismic instruments detected very shallow low-energy hybrid signals, similar to ones recorded during 1991-1993 when dome emplacement occurred on the main crater's floor.

Poás volcano erupted after 12 years of dormancy with two small steam and ash eruptions on 25th of March 2006 from the crater lake known as Laguna Calients. Authorities consider closing the easy-to-access crater rim to the public.

The dome growth of Soufrière Hills volcano is now focused in the summit area and towards the east and northeast. The northern side of the lava dome has shown little change during the past week, as MVo reports. Rockfalls and pyroclastic flows have been restricted to the Tar River Valley and they were particularly numerous on 19-20 March. The largest pyroclastic flows have travelled up to 2km down Tar River valley. 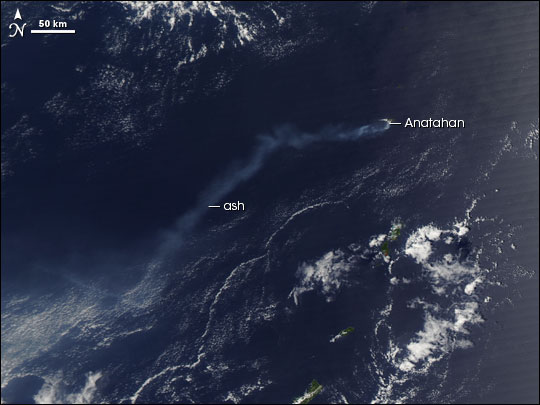 Anatahan volcano shows new activity. The volcano emitted a moderately large plume of ash on March 19, 2006 as was detected by the Moderate Resolution Imaging Spectroradiometer (MODIS) flying onboard the Aqua satellite.

Strong strombolian activity continues at Karymsky volcano with no significant changes. The volcano emitted frquently over the past week, and satellite imagery showed debris, most likely ash, draped along the sides of the mountain. When the skies were clear over the volcano, satellites also observed a thermal anomaly at the summit. In late March 2006, the USGS placed Karymsky at alert code orange, the second-highest level of concern. ->More on Karymsky

to top
Veniaminof volcano (United States) - Smithsonian / USGS Weekly Volcanic Activity Report for 22 March-28 March 2006 (Continuing Activity)
Wed, 22 Mar 2006, 06:00
Web-camera images of Veniaminof on 24 March showed a steam-and-ash plume drifting from the summit cone at a height less than 2.3 km (7,600 ft) a.s.l. This level of activity was similar to activity on 23 March, but higher than activity on 21 and 22 March when a very diffuse steam-and-ash plume was confined to the summit caldera. The flow of seismic data from Veniaminof stopped on the evening of 21 March due to technical problems. Read all
Poas volcano (Costa Rica) - Smithsonian / USGS Weekly Volcanic Activity Report for 22 March-28 March 2006 (New Activity / Unrest)
Wed, 22 Mar 2006, 06:00
On 24 March around noon, small phreatic eruptions began at Poás. The eruptions originated from the bottom of the volcano's Caliente Lake. Witnesses described a sudden emission of water and sediments S of the lake. Roaring was heard in a nearby tourist area and weak earthquakes were felt. Read all
Show more
Volcano Blog
Mon, 27 Jun 2022, 09:12
Science Spotlight: Geothermal Colors

Volcanic lightning is not only one of the most mysterious and impressive phenomena observed in some volcanic eruptions, but also important to science. ... Read all
Activity summaries
Sat, 2 Jul 2022, 10:50
Volcano earthquake report for Saturday, 2 Jul 2022

Volcano and photo tour to Java, Indonesia
Visit Java's famous volcanoes: Krakatau, Merapi, Bromo, Semeru, Ijen and others, crossing Java from west to east. This study and photography trip for a small exclusive group is one of our classic and best tours.
Volcano Tours

Volcano Expeditions
Witnessing a volcanic eruption from close is an unforgettable experience. We offer a wide variety of tours and expeditions to active volcanoes worldwide.
Quakes Felt

See quakes that people felt in the last week
Calendars

Volcano Calendars
We have published several volcano calendars over the years: usually, we use photos taken by us or our participants during our recent volcano tours and expeditions. A perfect gift if you're a fan of volcanoes!
Volcanic features