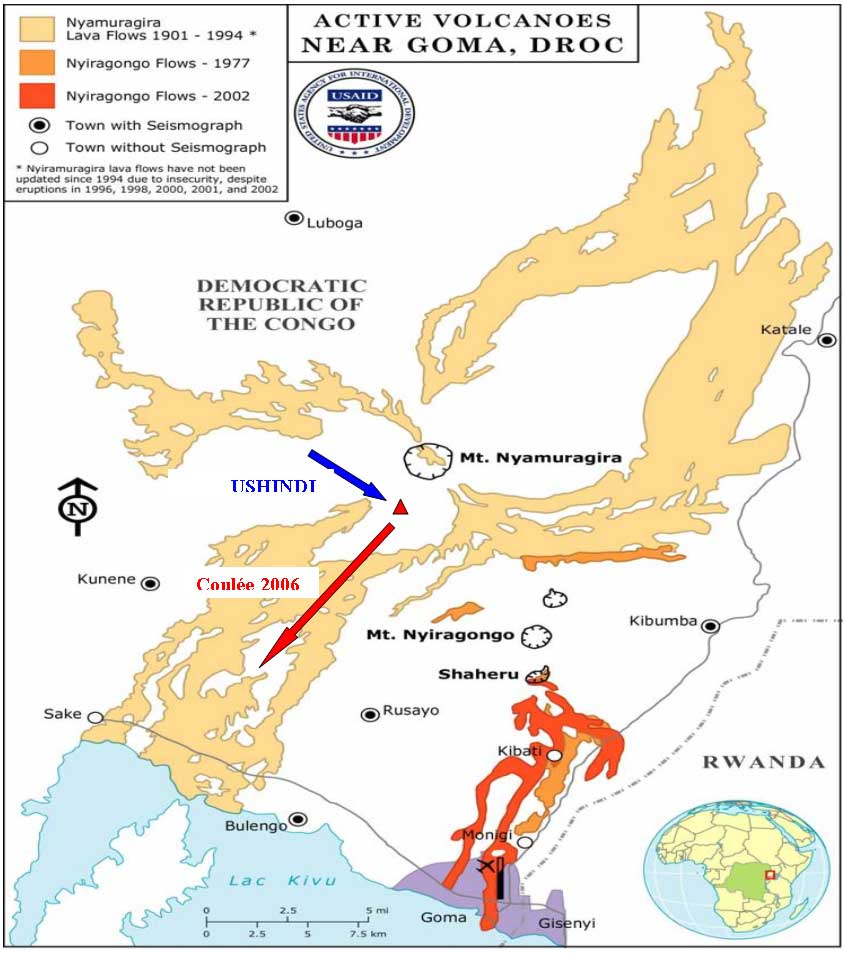 The eruption at Nyamuragira volcano continues. Protected by military from the OCHA and MONUC missions, scientist from OVG could overfly and visit the eruption area on 29 Nov. Their report (kindly provided by Kasereka Mahinda, director of OVG, and other staff at OVG), is summarized:
The location of the eruptive fissure is between the vents of Nyamuragira's eruptions in 1986 (Kitazungurwa: KT) and 2001 (Amani: AM).
During the first day of the eruption, lava flows have already travelled 10 km (!) towards the west. If the eruption continues, the flow is likely to cut the major E-W artery road from Sake to Goma lifeline. Because of the important production of toxic ash from the lava fountains, GVO warns the population of the possibility of acid rain, ash-contaminated water and crops. During its eruption in 2000, 17 people were reported killed because of drinking from ash-continaminated water sources, as well as a large number of failed pregnancies. In addition, large damage was afflicted to crops and lifestock.

During 17-24 November, lava-dome growth at Soufrière Hills continued and was concentrated on the NE part of the edifice. Ash venting originated from the westernmost of two cracks in the curved back of the shear E-facing lobe on the summit. Rockfalls and small pyroclastic flows traveled down the SW and NE flanks. Pyroclastic flows reached both the upper region of Tuitts Ghaut (N) and the sea via the Tar River Valley (E) on 23 November. An explosion produced an ash plume that rose to altitudes of 1.5-1.7 km (4,900-5,600 ft) a.s.l.

Based on a pilot report, the Darwin VAAC reported an ash plume riging to 7.6 km (25,000 ft) on 22 November, drifting to the S. Various other reports and news sources indicate that the crater's typical strombolian is relatively powerful these days and that blocks and bombs are frequently ejected outside the crater.

Eruptions continue at Langila volcano from its Crater 2 with continuous emissions of gray ash plumes rising to altitudes of  ca. 2-3.5 km and drifting predominantly to the W and NW.

According to the Darwin VAAC, an eruption at Karangetang on 24 November produced a small ash plume observed on satellite imagery that reached an altitude of 3 km (10,000 ft) a.s.l. 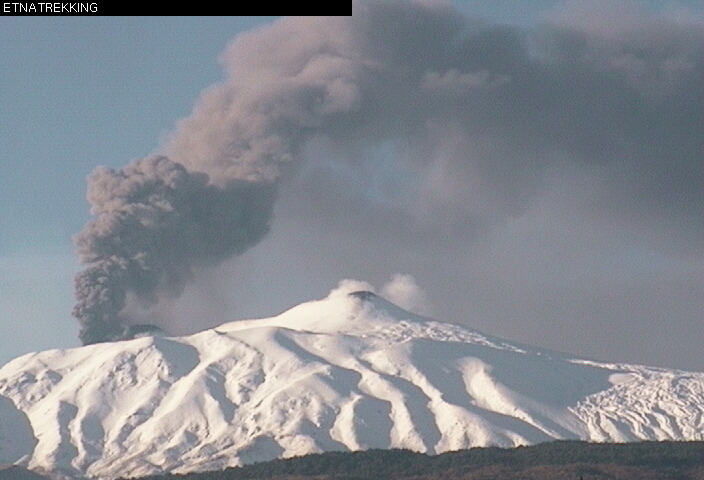 View of the ash plume from Etna on the morning of 29 Nov (Snapshot of one of Etnatrekking's webcams: www.etnatrekking.it)

A new episode of strong ash production, probably accompanied with strombolian activity from the SE crater took place in the morning of 29 November. Today (30 Nov.), no ash is visible. The lava flow in Valle del Bove from the 2800 m vent continues to flow. During the night, a number of breakouts and open channels are clearly visible. 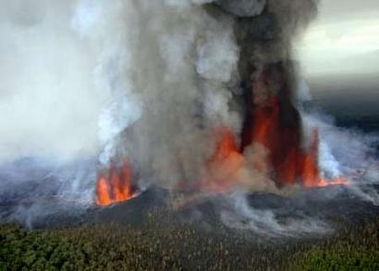 One of the world's largest volcanoes, mighty Nyamuragira (also spelled Nyamulagira) in eastern Congo, is in eruption again. The eruption began around 10 pm local time on Monday, 27 Nov. 2006 as press reports.Observation of the eruption is difficult because of the unrest in the region. The area around Nyamuragira is difficult to access and home to a number of armed rebel troops notoriously opposing the government army.
The volcano, notorious for its fluid lava, last erupted in 2002 and 2004, sending lava flows into mostly uninhabited forest and farm land.

After the strong eruption on 24 Nov, that forced the temporary shutdown of Catania's airport because of ash, Etna calmed down again on 25 Nov. Following its apparent two-days rhythm, another (but weaker) episode of strong stombolian activity took place at the SE crater on the afternoon of 26 Nov.

A new powerful eruptive episode took place this morning at Etna volcano, where the SE crater started lava fountaining and ash emissions accompanied by new lava flows from the fracture on the upper southern slope of SE crater as well as from the 3050 m vent on the flank of Bocca Nuova.
The ash plume reached a height of 5 km and travelled to the SE. 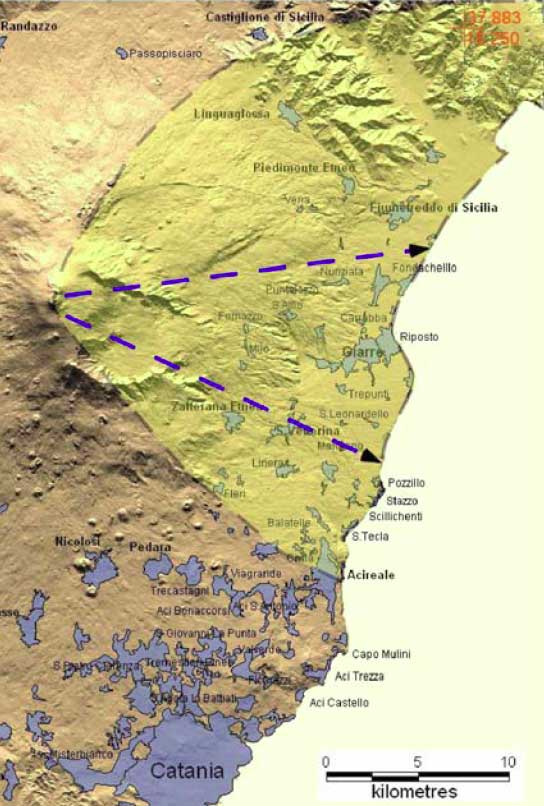 In the late morning of 21 Nov, strong explosive activity resumed at SE crater, culminating in the so far strongest episode. Bad visibility inhibited direct observations of the lava fountains, but a significant ash plume was generated that caused ash fall in a broad sector east of the volcano. As INGV reports, more than 50 grams of ash per square meter were deposited in the town of Giarre.
A detailed report about the fall out is found at INVG Catania's website (www.ct.ingv.it).

Chikurachki (Paramushir Island): The explosive activity at the volcano has been renewed again after exactly one week as the recent eruptive period stopped. ... Read all
Volcano Statistics
[enlarge map]

Blue flames of burning sulfur
Ijen volcano in East Java has one of the most impressive sulfur deposits on earth. They are so hot that the sulfur often ignites - a mysterious display at night caught on camera.
Books

Books about Volcanoes
A selection of great books about volcanoes and volcanism, grouped into sections of different reading level interest.
Volcano Map

Map of currently active volcanoes
See which volcanoes are erupting at the moment! Probably more than you think...
Subduction zones

Convergent plate boundaries and subduction zones
As an oceanic plates collides with another plate, it is subducted and generates volcanism on the overlying plate.
VAAC