Cleveland volcano had a moderate ash eruption on 28 Oct. 2006. Based on pilot reports and satellite data, AVO estimated the height of the cloud to be 20,000 ft. above sea level.

On the 28th of October 2006, a new phase of small lava fountains and strong strombolian activity occurred at the SE crater, between 10h32 and ca. 13h00 local time, following an increase in volcanic tremor starting at 05h30. A plume of ash was produced that reached 4 km a.s.l. and travelling south.

A new chapter in Etna's book of surprises: Early on Thursday (around 2am on 26 Oct 2006) a new, short.lived lava flow emerged from the same fracture on the S flank of SE crater as on 23 Oct. Then, two hours later (around 4am), a new lava flow issued from a completely new location, from a new fracture on the south flank of Bocca Nuova at about 3050 m elevation. The flow branches into two arms near its vent and then joins again at the base of the summit cone. At noon of 26 Oct., it was still well alimentated, with an estimated rate of 10m3/sec. It expands in the flat area below the summit cone, where it has cut the jeep road circling the summit area.
In the meanwhile, the flow from the vent ESE of SE crater at 2830 m elevation which appeared on 13 Oct continues to flow into the Valle del Bove and has now reached the Monti Centinari.

After new explosive activity the day before yesterday, that culminated in sustained lava fountains 50-100m high from the summit crater, a new fissure vent has opened on the S flank of SE crater cone, and a new lava flow emerged from there. The flow branched into two arms, both travelling towards the Torre del Filosofo. As of today, activity at the SE crater has ceased for the time being.

The effusive eruption at Piton de la Fournaise volcano is continuing and shows little variation, except that the intensity of the tremor has increased again to 60% of its original value.

In addition to the lava flow from the fissure at 2830 m elevation, SE crater seems to resuming explosive activity. Yesterday, INGV reported a number of strombolian explosions from its summit vent.

Tungurahua had a series of strong eruptions on the afternoon and evening of 18 October 2006. Lava fountains up to 1000 m height were observed. An associated as plumes rose to 8-10 km, visible on satellite images, and ballistic bombs were ejected to distances of 800 m of the crater. Westerly winds caused strong ash fall in the sector of Puyo east of the volcano.
During the night of 18-19 Oct, activity decreased again, but as a precaution, 300 people from nearby villages are reported evacuated.

Bulusan had another phreatic explosion on Thursday 19 Oct, 2006, at 18h44 local time, emitting an ash plume rising to 3-4 km elevation. 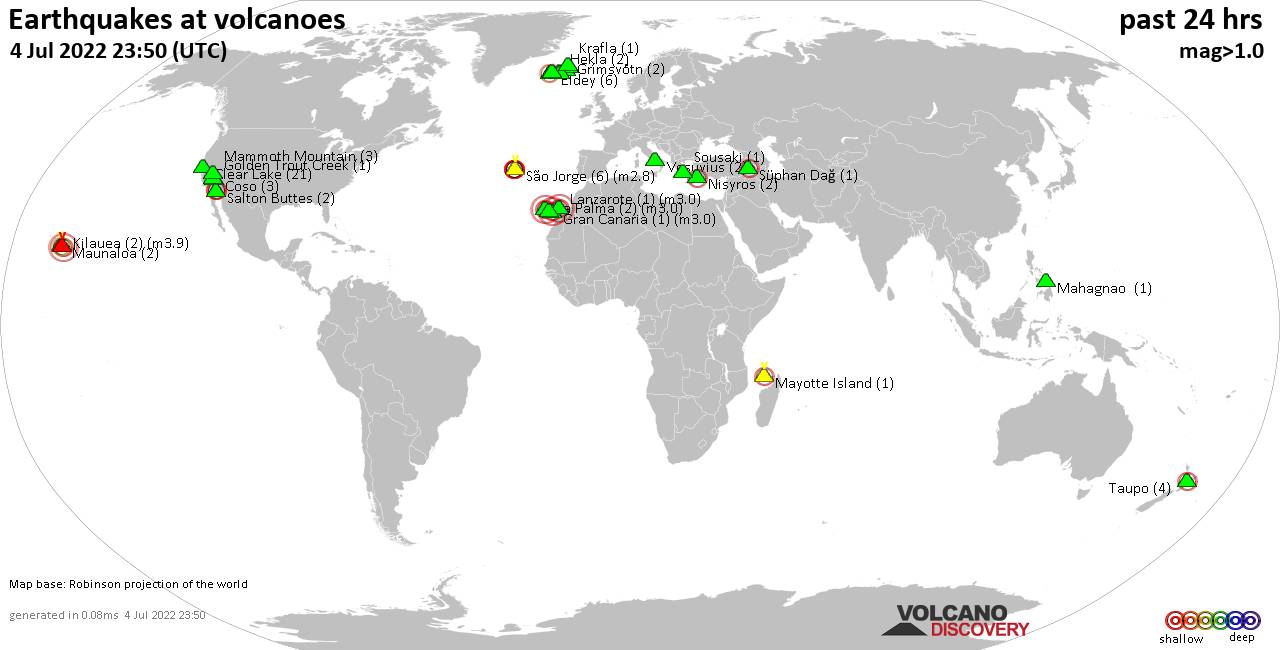 Batu Tara photos
A remote island in the Flores Sea of Indonesia formed by a single volcano that has been in strong strombolian eruption for years. We regularly lead expeditions to there where we camp several days to observe it.
Volcano Calendar 2016

Land of Theseus
The Saronic Gulf opposite Athens is one of the most beautiful and interesting areas of Greece, full of beautiful landscapes, small towns, islands, archeological remains and one of Europe's least known active volcanic areas. Join us on a relaxing tour to discover this fascinating area!
Get the ad-free version!
Why is there advertising on this site?
Support us - Help us upgrade our services!
We truly love working to bring you the latest volcano and earthquake data from around the world. Maintaining our website and our free apps does require, however, considerable time and resources.
We need financing to increase hard- and software capacity as well as support our editor team. We're aiming to achieve uninterrupted service wherever an earthquake or volcano eruption unfolds, and your donations can make it happen! Every donation will be highly appreciated. If you find the information useful and would like to support our team in integrating further features, write great content, and in upgrading our soft- and hardware, please make a donation (PayPal or Online credit card payment).