On July 21, the activity inside Pu'u 'O'o cone ceased, and a new intrusion made its way to the surface in the area east of the cone and uprift from Kupaianaha shield (active in the 1990s). More news and photographs about this remarkable change in the ongoing eruption can be found at HVO's update pages: http://volcano.wr.usgs.gov/hvostatus.php.

As more news has become available, the news about an effusive flank eruption at Lengai around 15 July turns out to be probably false. The observed "ashcloud" was dust from a landslide. This demonstrates how difficult it is in this area to have robust information. The ongoing seismic activity in the Gregory Rift, however, is quite peculiar. 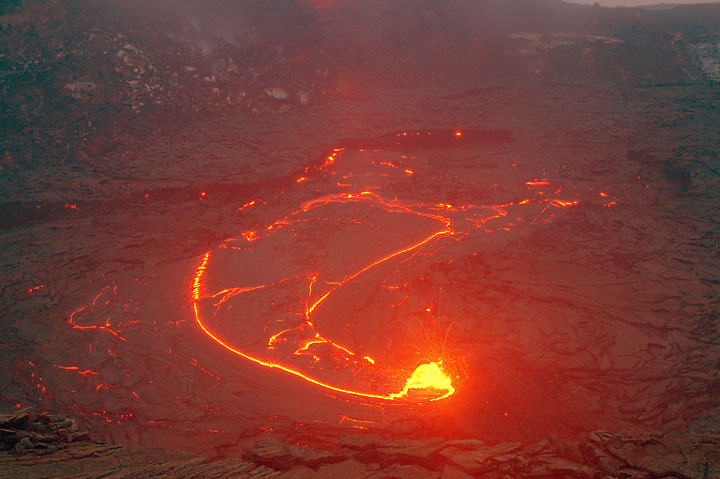 The lava lake inside the Puu Oo crater as on 11 July.

Over the past week, the lava lake inside the Puu Oo crater became less and less alimented, dropped several meters inside an 8-shaped system of levees. It remaining active in this smaller area, fed by the eastern vent, but by yesterday, its activity appears to have ended according to information from HVO. Instead, new vents have become active in the western area of the Puu Oo cone.

Kamchatka photos
A growing list of photo galleries taking during our expeditions in this fantastic part of the world, full of volcanoes, unspoiled nature and colors.
Volcano Tours

Volcano Expeditions
Witnessing a volcanic eruption from close is an unforgettable experience. We offer a wide variety of tours and expeditions to active volcanoes worldwide.
Seismic Activity Level

Kelut volcano's lava dome in 2007
One of the most impressive lava dome eruptions in recent years. A new dome formed in the crater lake of Kelut volcano (East Java) in late 2007. Enjoy some unique pictures.
Krakatau to Bali