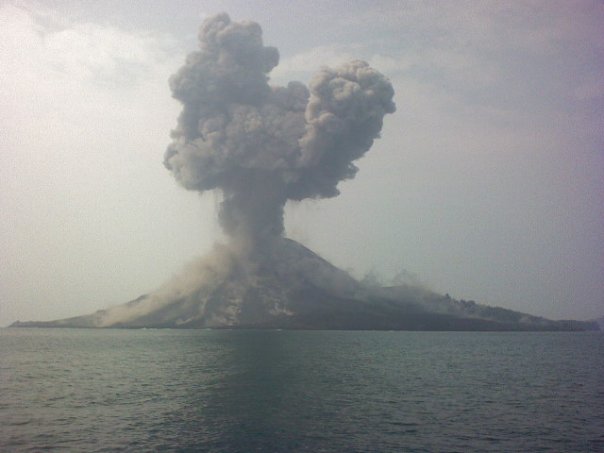 Violent eruption on Aug 11, 2009 (Photo courtesy: Yohannes Tyas Galih Jatis)
Explosive activity at Anak Krakatau has resumed over the past weeks. Strong vulcanian-type eruptions from the growing lava dome in the new crater occur at intervals of 90-360 minutes as Yohannes one of our correspondants reports from a recent visit. Blocks are being thrown over the whole of the southern part of the island, including the forest and often reach the water as well. Small pyroclastic flows sometimes develop on the slope of the summit cone. The island must be regarded as an extremely dangerous place to be at the moment. Whoever visits the island should be aware of the risk of a sudden violent explosion, especially because there is little warning before an explosion and there are long intervals of quiet in between. 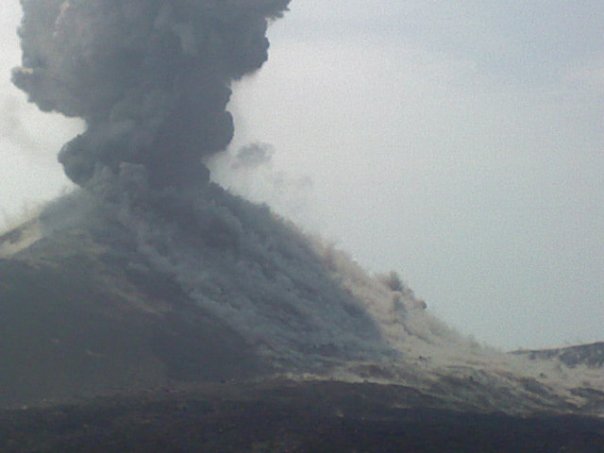 Volcanic lightning is not only one of the most mysterious and impressive phenomena observed in some volcanic eruptions, but also important to science. ... Read all
Activity summaries
Fri, 1 Jul 2022, 21:50
Volcano earthquake report for Friday, 1 Jul 2022

Earthquake Archive
Look up any earthquake anywhere from 2010
Ibu

Ibu volcano photos
Ibu in Halmahera is one of the most active, but rarely visited volcanoes in Indonesia. A spectacular lava dome is growing inside the volcano's breached crater, with frequent explosions.
Raung

Raung volcano photos
One of the largest and most active volcanoes in East Java, rarely-visited and relatively unknown Raung became (in)famous during its recent eruption in 2015 when its frequent ash plumes forced the repeated closure of Bali's airport.
Stromboli

Stromboli volcano photos
The lighthouse of the Thyrrhenian Sea - thanks to its typical, regular explosions that coined the term "strombolian activity", Stromboli is one of the most famous and photogenic volcanoes in the world.
Kuril Islands

Photos from the Kuril Islands
Some rarely visited volcanoes, unspoiled nature, lots of WWII remnants - browse through several galleries from our tours to the Kuril Islands.
Get the ad-free version!
Why is there advertising on this site?
Support us - Help us upgrade our services!
We truly love working to bring you the latest volcano and earthquake data from around the world. Maintaining our website and our free apps does require, however, considerable time and resources.
We need financing to increase hard- and software capacity as well as support our editor team. We're aiming to achieve uninterrupted service wherever an earthquake or volcano eruption unfolds, and your donations can make it happen! Every donation will be highly appreciated. If you find the information useful and would like to support our team in integrating further features, write great content, and in upgrading our soft- and hardware, please make a donation (PayPal or Online credit card payment).