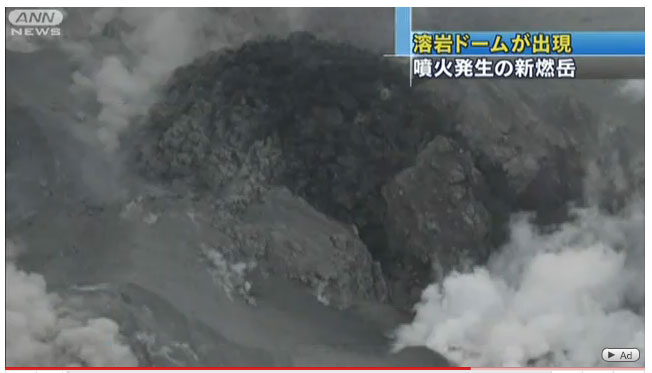 The new lava dome inside Kirishima's crater on 29 Jan (ANN news)
The eruption at Kirishima seems to enter a more magmatic phase; while the ash plume further decreased and ash production declined, a new lava dome has appeared in the summit crater. Visible glow from the crater is now strong. 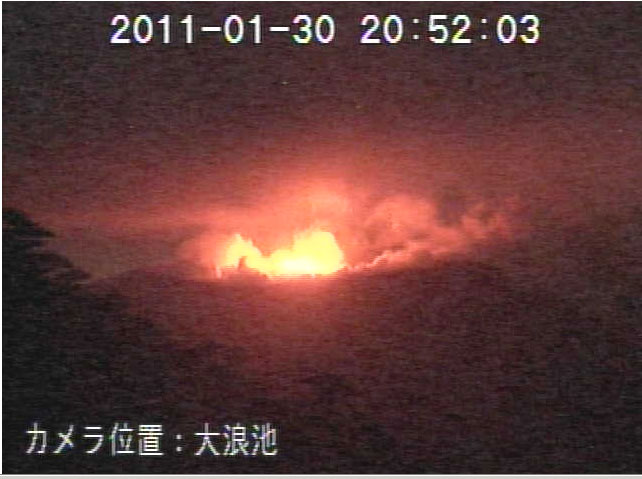 Webcam image on the evening of 30 Jan 2011 showing strong glow, possibly from a lava flow.
Show more
Taal volcano (Philippines) update: volcano restless
Sun, 30 Jan 2011, 09:52
Taal volcano continues to be restless. PHIVOLCS reported slightly increased seismic activity and steam rising from the thermal area inside the Main Crater on 18 January, but temperature, acidity and color of the lake are at normal levels, and the color had not changed.
Mayon volcano (Philippines) update: weak summit activity
Sun, 30 Jan 2011, 09:13
Weak activity is present at Mayon volcano's summit crater, where a red glow can be seen at night. Philvolcs reports that during 18-25 January 2011, up to two daily volcanic earthquakes were detected by the seismic network.
to top
Kirishima volcano (Kyushu, Japan), activity update: ash emissions decrease
Sat, 29 Jan 2011, 07:35 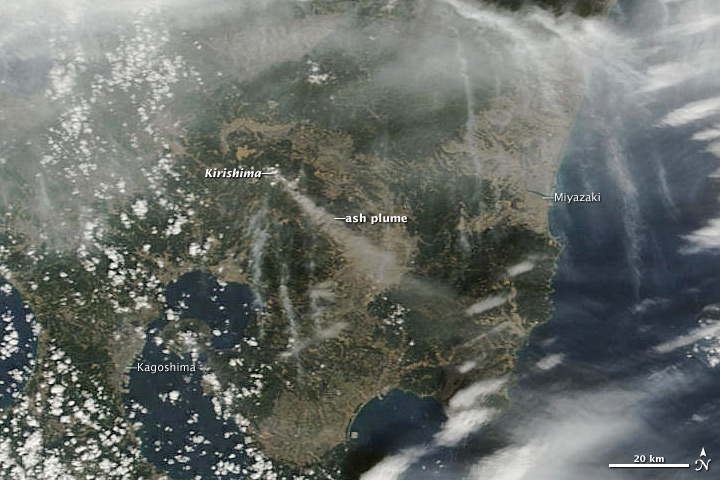 Ash plume from Kirishima volcano drifting SE over Kyushu Island (26 Jan). Image credit: NASA Earth Observatory
The eruption at Kirishima still goes on, but the plume height today is only half in height (reaching 3-4 km, according to VAAC Tokyo). Judging from photos of the webcamera and various reports, the intensity of the ash emission seems to have gone down compared to the past days.
Kirishima volcano (Kyushu, Japan), activity update: ongoing strong ash emissions
Fri, 28 Jan 2011, 13:35
The eruption at Kirishima continues with strong ash emissions. Strong ash falls occurs in southern Kyushu. An ash plume from the eruption seems to reach 7.5 km (25,000 ft) elevation and is drifting southeast, causing (so far minor) disruptions to air traffic. Read all
Kirishima volcano (Kyushu, Japan), activity update: ongoing strong ash emissions
Thu, 27 Jan 2011, 07:36
The explosive eruption of Kirishima goes on unabated. A dense column of ash is being emitted from the vent. Tokyo VAAC issued an ash cloud warning at flight level 210 - in other words, the eruption plume is estimated to have reached or could reach 21,000 ft (ca. 7 km.) Read all
Kirishima volcano (Kyushu, Japan): new eruption
Wed, 26 Jan 2011, 23:28 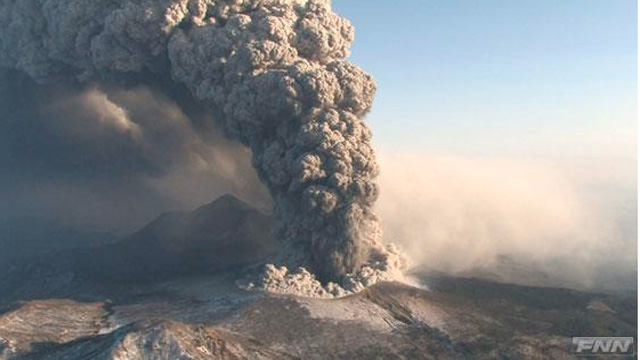 List and map of all volcanoes in Africa. Most volcanoes are located in the Great Rift Valley, but there are more.
Kelut lava dome

Kelut volcano's lava dome in 2007
One of the most impressive lava dome eruptions in recent years. A new dome formed in the crater lake of Kelut volcano (East Java) in late 2007. Enjoy some unique pictures.
Reykjanes eruption

Volcanic eruption in Iceland 2021
A new fissure eruption started on Iceland's Reykjanes peninsula in Mar 2021. Follow the latest news and updates on this remarkable event!
Eyjafjallajökull

Eyjafjallajökull volcano photos
The volcano in Iceland with the unpronounceable name... but famous in 2010 when its ash clouds drifted over Europe and forced a unprecedented large-scale airspace closure for several days, stranding millions of passengers.
Kamchatka 2018

Tour photos Sep 2018
Impressions from our Tour to Kamchakta during Sep 2018: northern group of volcanoes, Karymsky, and the southern plateau with Mutnovsky and Gorely.
Get the ad-free version!
Why is there advertising on this site?
Support us - Help us upgrade our services!
We truly love working to bring you the latest volcano and earthquake data from around the world. Maintaining our website and our free apps does require, however, considerable time and resources.
We need financing to increase hard- and software capacity as well as support our editor team. We're aiming to achieve uninterrupted service wherever an earthquake or volcano eruption unfolds, and your donations can make it happen! Every donation will be highly appreciated. If you find the information useful and would like to support our team in integrating further features, write great content, and in upgrading our soft- and hardware, please make a donation (PayPal or Online credit card payment).