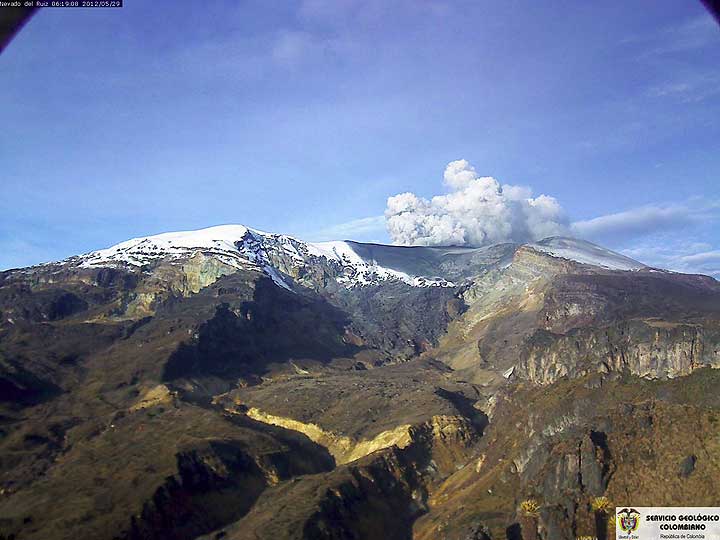 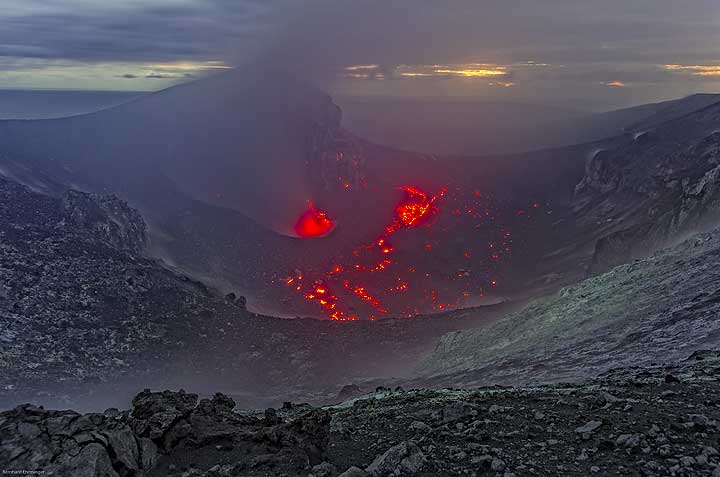 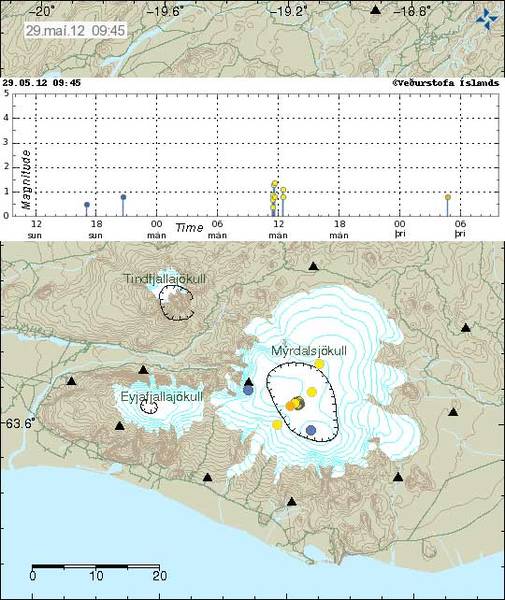 Small earthquake swarm at Katla volcano during 28-29 May 2012 (Icelandic Met Office)
A swarm of 14 small to very small mostly very shallow quakes occurred at Katla volcano yesterday and today. Epicenter depths were reported between 0.1 and 12.2 km. Judging from the depth and magnitude of the quakes, the most likely cause for the seismic swarm are adjustments of the hydrothermal system under the icecap, and probably not magmatic intrusions (which would be possible indicators of a future new eruption). Read all
Merapi volcano (Central Java, Indonesia) activity update: slow growth of new lava dome
Tue, 29 May 2012, 10:05 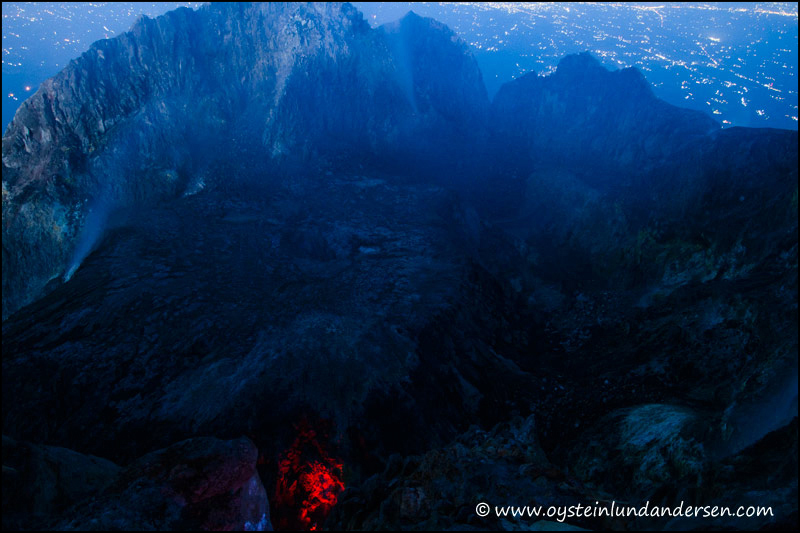 The new lava dome and red glow on the dome wall from a isolated part of active lava, that is located on the western side of the crater/dome (27 May 2012).
During a recent visit to the crater of Merapi 26-27 May, our friend Øystein from Jakarta could clearly observe a new lava dome that is slowly building up inside a depression of the summit crater. The dome is not very active yet, but has a very small glowing part of lava at the western end. This activity is consistent with the latest data from the Merapi volcano observatory reports on seismic levels at the time.
Kīlauea volcano (Hawai`i): Coastal flows pause, pressure retreats to rift zone
Sun, 27 May 2012, 21:02
After a week-long deflation on Kīlauea, lava flows which had reached within .5mi/750m of the ocean finally felt the pressure relief and came to a pause. At the time of this writing there is still low pressure on the volcano, and the longer this continues the more likely that the plumbing system will be disrupted and that lava will re-emerge in a new location -- whether on a new point up the lava tube, or even all the way back to Pu`u `O`o crater on the east rift zone. Magma continues to come into the volcano, as evidenced by continued extension, and without an outlet, sooner or later something will have to give! While there is no red lava visible on the coast today, there is still bright glow from the newest summit vent in the National Park. This is a crucial period of change for the volcano, and we all await what will happen next!
to top
Sirung volcano (Pantar Island, Indonesia ) activity update: weak steaming, alert lowered
Sun, 27 May 2012, 04:27
On 25 May, the alert level of Sirung volcano was placed back to 2 (out of 4), based on visual seismic observations that indicate a decreasing trend since the eruption alert was issued on 12 May.
Santorini Island (Greece) - photos & impressions from the geology walking tour in May 2012
Sat, 26 May 2012, 11:22 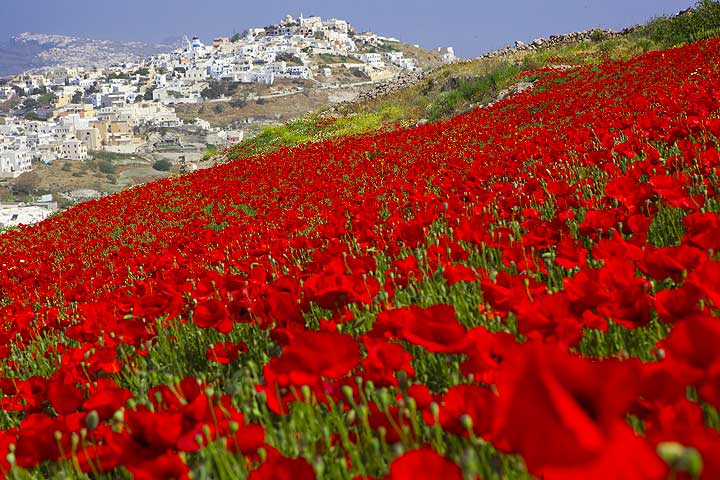 Red poppies on Santorini in spring
A series of photos from the recent Fascination Volcano tour on Santorini
Summary of world-wide volcanic activity 16-22 May 2012
Thu, 24 May 2012, 09:40
The past week was dominated by the paroxysm at Fuego volcano on 20 May and ongoing strong explosive activity at Shiveluch in Kamchatka. The new Smithsonian / USGS Weekly Volcanic Activity Report was published today and is summarized as follows: Read all
Tungurahua volcano (Ecuador) activity update: steam and ash venting, occasional explosions causing ash fall, lahars
Thu, 24 May 2012, 09:38
On 16 May a steam-and-gas plume drifted W and lahars descended the W flank. On 18 May ashfall was reported in Manzano (8 km SW), Choglontus (SW), Chontapamba (W), Yuibug, Puela (8 km SW), and high in the Mapayacu drainage (SW). Read all
to top
Shiveluch volcano (Kamchatka) activity update: strong explosive activity, large ash plumes up to 8-9 km altitude
Thu, 24 May 2012, 09:35
Strong explosive activity continued during the past week. Ground-based observers and satellite imagery indicated that a viscous lava flow continued to effuse in the active crater, and was accompanied by fumarolic activity and lava-dome incandescence. Read all
Santa María / Santiaguito volcano (Guatemala) activity update: moderate ash explosions, ash fall and occasional lahars
Thu, 24 May 2012, 09:31
INSIVUMEH reported that on 21 May a lahar traveled down Santa María's Rio Nima II drainage, carrying tree branches and 40-cm-wide lava blocks. Read all
Show more
Volcano Blog
Mon, 27 Jun 2022, 09:12
Science Spotlight: Geothermal Colors

Seismic crisis in SW Iceland
In mid Feb 2021, a strong seismic crisis started on the Reykjanes peninsula, caused by a magmatic intrusion that could lead up to a new volcanic eruption. Follow the latest developments!
Milos Geo Tour

Island of Venus
Milos Island in Greece is one of the most beautiful and photogenic islands of the Mediterranean. Its boasts breathtaking scenery of colorful volcanic rocks, some of the finest beaches of the country, a rich archeological heritage, great hospitality and delicious local cuisine. Come join us to explore this magical island on a 6-days geological tour!
Dukono

Dukono volcano photos
Dukono on Halmahera in Indonesia has been in permanent activity for years, often producing ash plumes that drift around the northern part of the island and have become normality.
Volcanic ash alert

Latest quakes at Katla volcano
One of Iceland's most active and dangerous volcanoes is showing signs of unrest and statistically due for a new eruption. Earthquakes could give a clue.
Get the ad-free version!
Why is there advertising on this site?
Support us - Help us upgrade our services!
We truly love working to bring you the latest volcano and earthquake data from around the world. Maintaining our website and our free apps does require, however, considerable time and resources.
We need financing to increase hard- and software capacity as well as support our editor team. We're aiming to achieve uninterrupted service wherever an earthquake or volcano eruption unfolds, and your donations can make it happen! Every donation will be highly appreciated. If you find the information useful and would like to support our team in integrating further features, write great content, and in upgrading our soft- and hardware, please make a donation (PayPal or Online credit card payment).