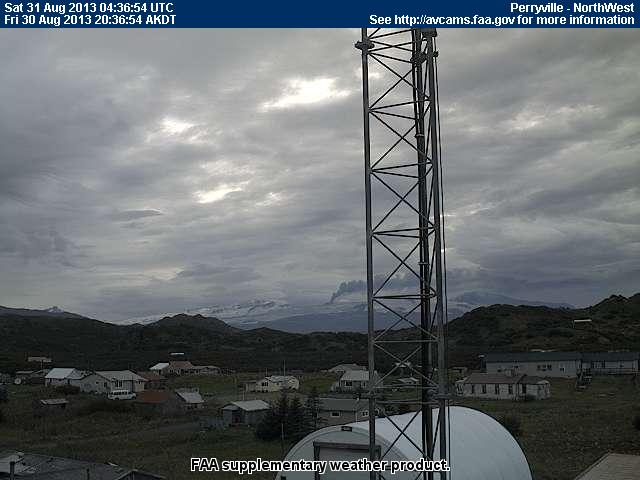 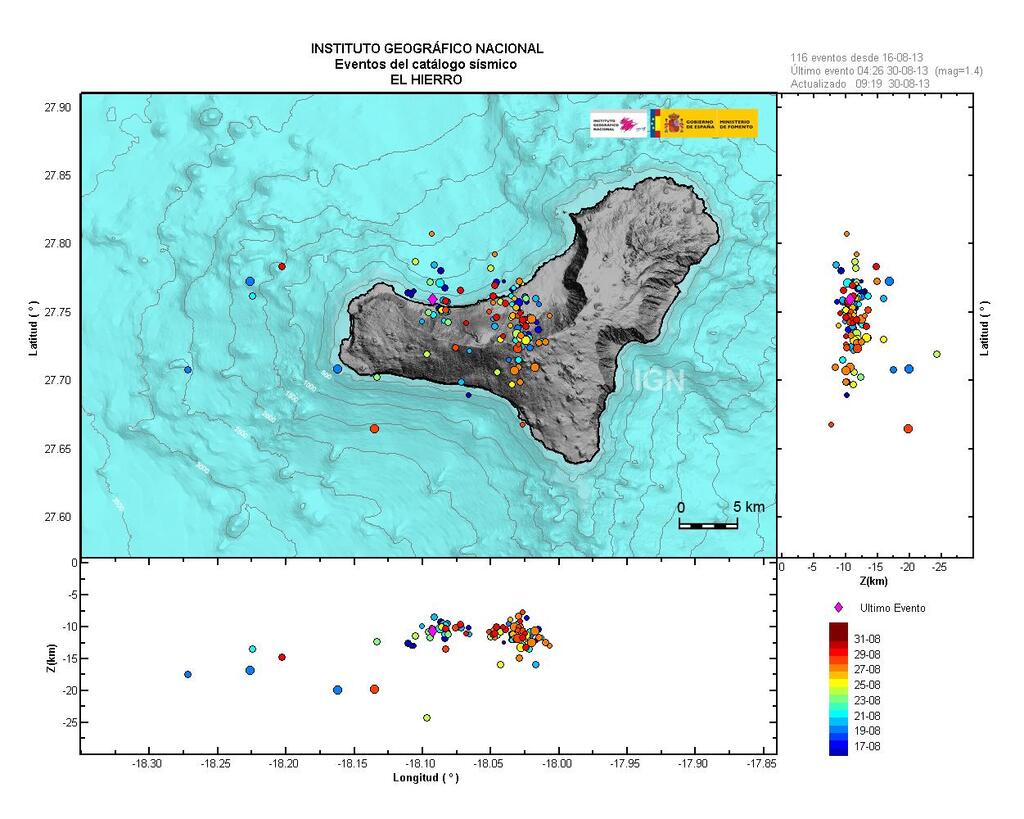 Location of quakes during the past 2 weeks (IGN)
El Hierro (Canary Islands, Spain): Small earthquakes (mostly below magnitude 2) continue to occur frequently (10-20 per day), mostly under the central part of the island. Right now, this activity seems to be picking up, but it is too early to see if this evolves into another swarm. Read all
Momotombo volcano (Nicaragua): shallow 3.8 earthquake
Fri, 30 Aug 2013, 10:13 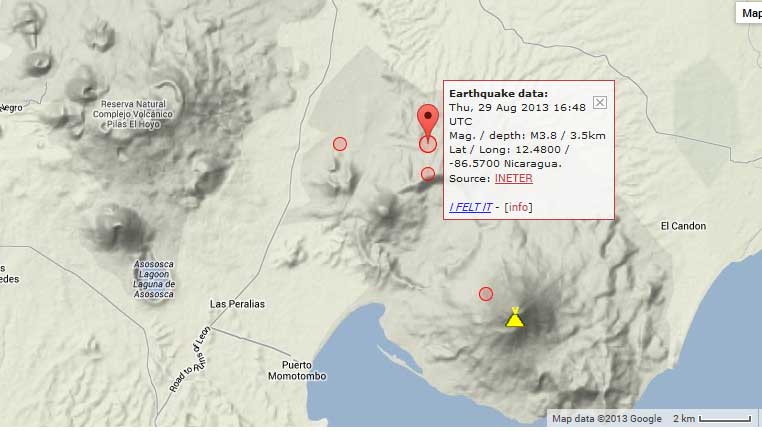 Location of yesterday's earthquake under Momotombo volcano, Nicaragua
A swarm of quakes including a shallow magnitude 3.8 felt earthquake occurred yesterday morning (16:38 GMT) at 3.5 km depth under the NW flank of the volcano. There are no reports of other unusual activity at the volcano. 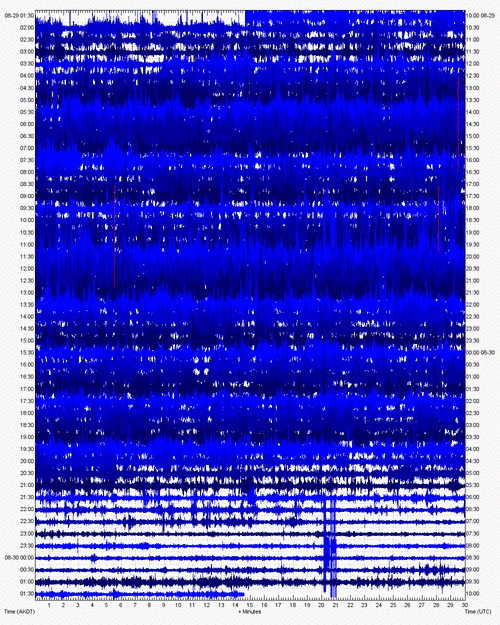 Current seismic recording from Veniaminof (VNHG station, AVO)
The eruption at the intracaldera cone of Veniaminof Volcano continues. The seismicity over the past 24 hours has been characterized by discreet episodic bursts of tremor, likely associated with lava effusion and minor ash emission. Read all
Ambrym volcano (Vanuatu) activity update
Fri, 30 Aug 2013, 09:45

SO2 plume from Ambrym volcano (NOAA)
A large SO2 plume is drifting NW from the volcano, where at least two lava lakes in the Benbow and Marum craters remain active.
Popocatépetl volcano (Central Mexico) activity update
Fri, 30 Aug 2013, 09:36 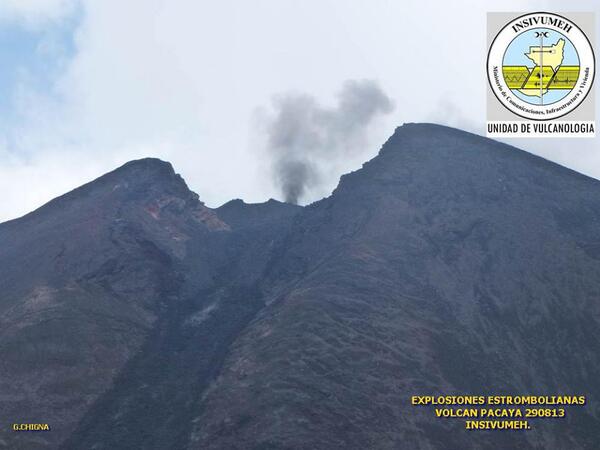 Pacaya volcano last evening (INSIVUMEH)
Weak strombolian activity and the effusion of lava flows continues. The activity can be seen from the capital and the coast. 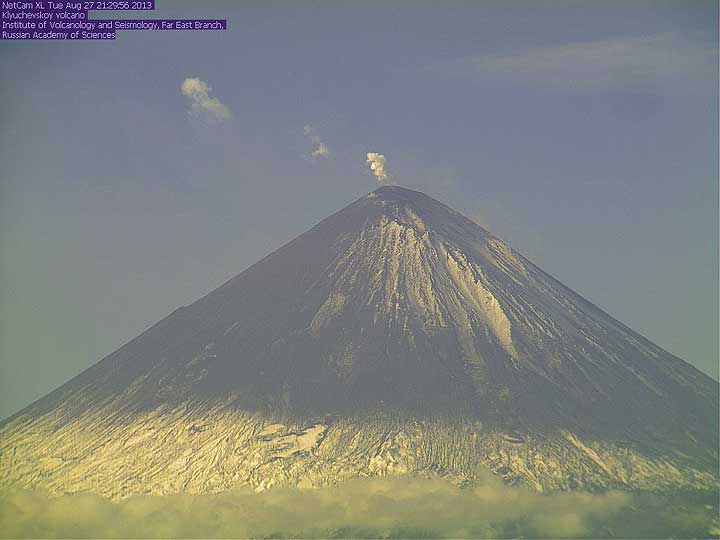 17 days volcano trekking
This is one of our most exciting volcano tours! Halmahera, North Sulawesi and the Sangihe Islands are not only very scenic and interesting as well as nearly unspoiled by tourism, but also home to some of the country's most active (and often erupting) volcanoes, inclduing Dukono, Ibu, Lokon, Soputan and Karangetang.
Earthquake report

Monthy earthquake reports
For each month since July 2012, we publish a summary of quake activity world-wide: find the list of largest quake, a map showing all significant quakes as well as detailed statistics on seismic activity during this time.
Lava lakes

Volcanic crisis at Sakurajima - updates
A strong earthquake swarm and increased inflation were detected in August 2015 and triggered authorities to raise the alert level, as volcanologists think that a larger eruption could follow. News and updates on the events can be found on this page.
Italy
01-09 Oct 2022

From Stromboli to Etna
Get to know some of the most active and interesting volcanoes in the world: famous Mt. Etna on Sicily; Vulcano, in the Ancients'belief home to Vulcanus, God of Fire; Lipari with its spectacular obsidian and pumice deposits; and Stromboli, "Lighthouse of the Tyrrhenian Sea", known for its permanent fireworks!
Get the ad-free version!
Why is there advertising on this site?
Support us - Help us upgrade our services!
We truly love working to bring you the latest volcano and earthquake data from around the world. Maintaining our website and our free apps does require, however, considerable time and resources.
We need financing to increase hard- and software capacity as well as support our editor team. We're aiming to achieve uninterrupted service wherever an earthquake or volcano eruption unfolds, and your donations can make it happen! Every donation will be highly appreciated. If you find the information useful and would like to support our team in integrating further features, write great content, and in upgrading our soft- and hardware, please make a donation (PayPal or Online credit card payment).