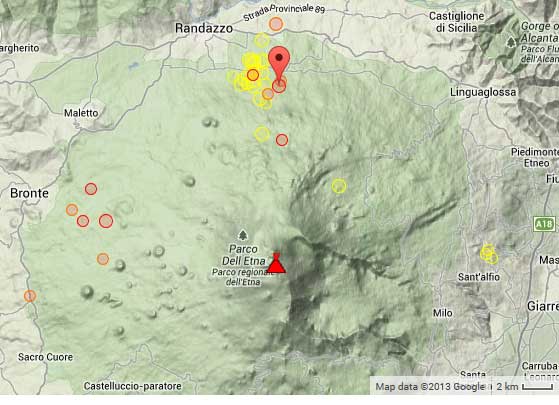 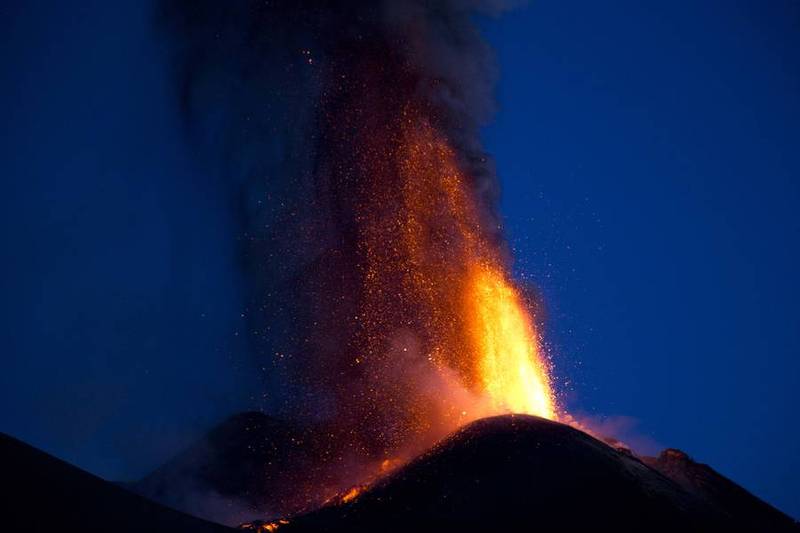 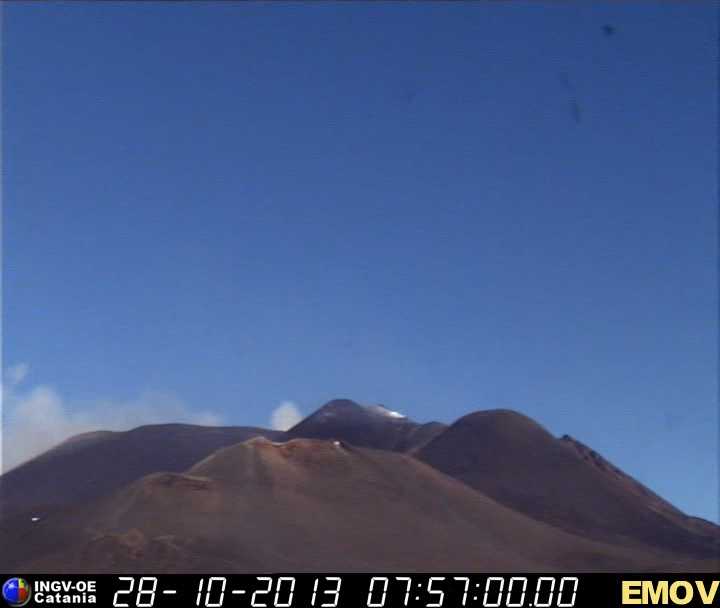 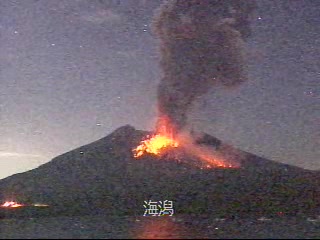 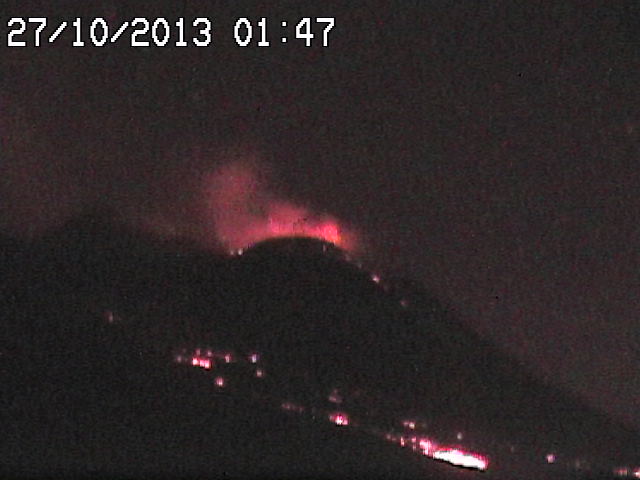 The New SE crater last night
Etna (Sicily, Italy): Tremor has remained elevated and the New SE crater continued to produce weak strombolian activity and aliment the lava flow during much of the night. At the moment (Sunday morning), it is not clear if this activity is continuing. Read all
Sinabung volcano (Sumatra) - ash explosion yesterday evening
Sun, 27 Oct 2013, 07:07 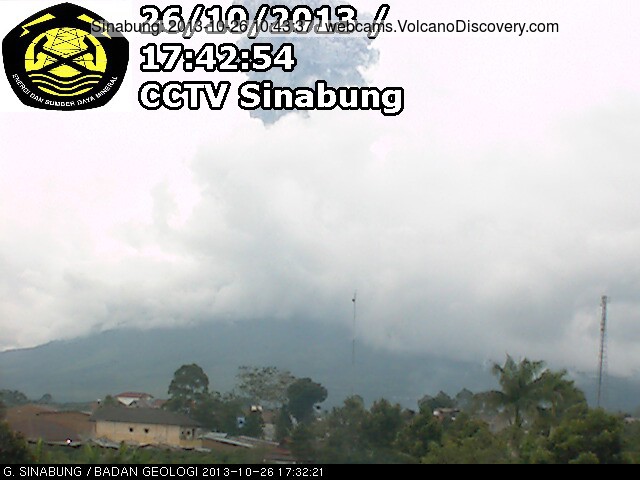 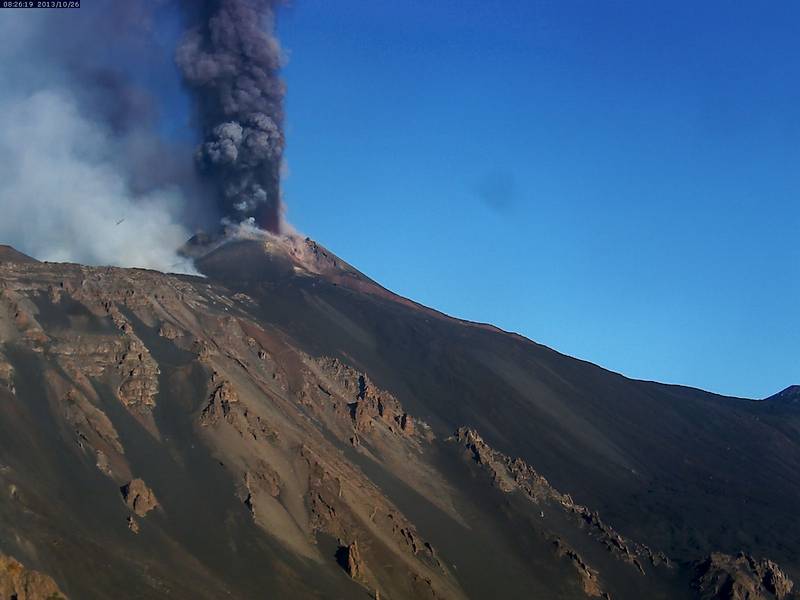 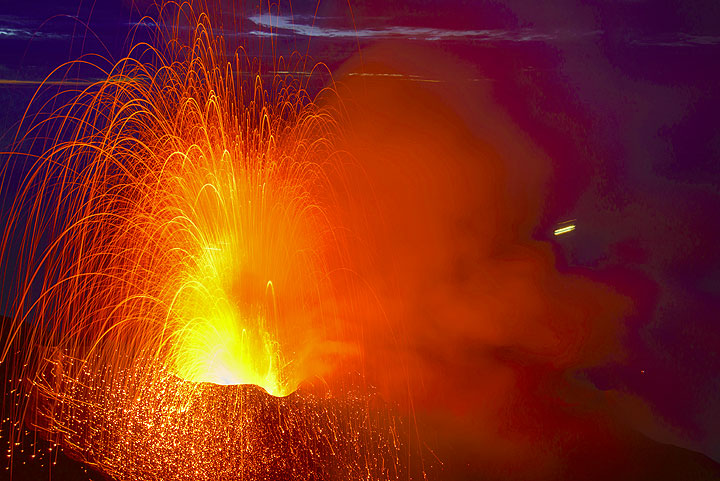 Strrong strombolian explosion from the western vent of Stromboli (24 Oct)
Stromboli (Eolian Islands, Italy): Activity has picked up during the past week. During a visit yesterday afternoon and evening, we observed frequent and often strong strombolian eruptions from the NW vent (Ginostra side), which had enlarged a lot since early this year. Read all
Stromboli volcano (Italy): strong activity from NW vent (field observation)
Fri, 25 Oct 2013, 07:28

Strrong strombolian explosion from the western vent of Stromboli (24 Oct)
Activity has picked up during the past week. During a visit yesterday afternoon and evening, we observed frequent and often strong strombolian eruptions from the NW vent (Ginostra side), which had enlarged a lot since early this year. Read all
to top
Sinabung volcano (Sumatra) - new explosions and ash emissions
Fri, 25 Oct 2013, 07:21
A new phase of explosive eruptions began Wednesday afternoon at around 16:20 local time and intensified yesterday morning between 6 and 8 am. An ash plume rose about 3 km from the volcano.
Volcanic activity worldwide 24 Oct 2013: Sakurajima, Zhupanovsky, Langila
Thu, 24 Oct 2013, 17:03 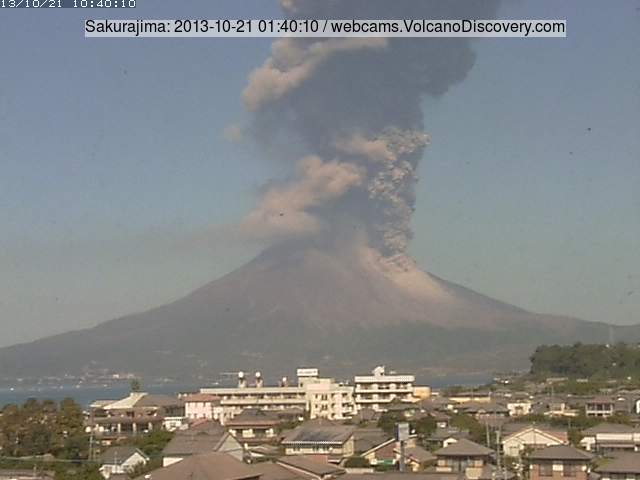 SO2 plume from Langila on 22 Oct (NOAA)
A thermal hot spot and an SO2 plume are often visible on satellite data, indicating that the volcano is in eruption although the nature of its current activity is not known exactly. Read all
to top
Zhupanovsky volcano (Kamchatka): new eruption
Thu, 24 Oct 2013, 09:01
A new explosive eruption started yesterday night (23 Oct). An ash plume was detected drifting at an estimated 16,000 ft (5 km) altitude and drifting ESE. At least 1 mm of ash have been deposited in the Nalychevo valley, a natural park between Zhupanovsky and Avachinsky volcanoes. Read all
Volcanic activity worldwide 23 Oct 2013: Ibu, Stromboli, Karymsky, Dukono, Veniaminof, Etna
Wed, 23 Oct 2013, 17:03 MODIS hot spot data (past 7 days) for Ibu volcano (ModVolc, Univ. Hawaii)
Stromboli (Eolian Islands, Italy): According to the local mountain guides from Magmatrek, activity has increased significantly during the past 3 days, especially at the NW vent. A group of VolcanoDiscovery has arrived on the island and will report in more detail in the following days. Read all
Show more
Volcano Blog
Mon, 27 Jun 2022, 09:12
Science Spotlight: Geothermal Colors

Volcano Trip
Guatemala is a country with spectacular volcanic activity, wonderful landscapes, colorful villages and towns, friendly people.
Join a trip organized by an experienced Guatemalan guide and photographer Diego Rizzo together with VolcanoDiscovery to have a chance to watch the active volcanoes (Fuego and Pacaya) from up close! Get an in-depth experience of the powerful and turbulent natural processes at work and take stunning pictures!
Volcanoes of Iceland

Infos + news about volcanic activity in Iceland
Hekla, Katla, Krafla, Askja, Eyafjallajökull, Heimaey, Surtsey are famous names of active volcanoes, but there are many more in Iceland.
Indonesia

Photos from Indonesia
Hundreds of photos from Indonesia's volcanoes, landscapes, people and culture.
Sakurajima videos
Get the ad-free version!
Why is there advertising on this site?
Support us - Help us upgrade our services!
We truly love working to bring you the latest volcano and earthquake data from around the world. Maintaining our website and our free apps does require, however, considerable time and resources.
We need financing to increase hard- and software capacity as well as support our editor team. We're aiming to achieve uninterrupted service wherever an earthquake or volcano eruption unfolds, and your donations can make it happen! Every donation will be highly appreciated. If you find the information useful and would like to support our team in integrating further features, write great content, and in upgrading our soft- and hardware, please make a donation (PayPal or Online credit card payment).