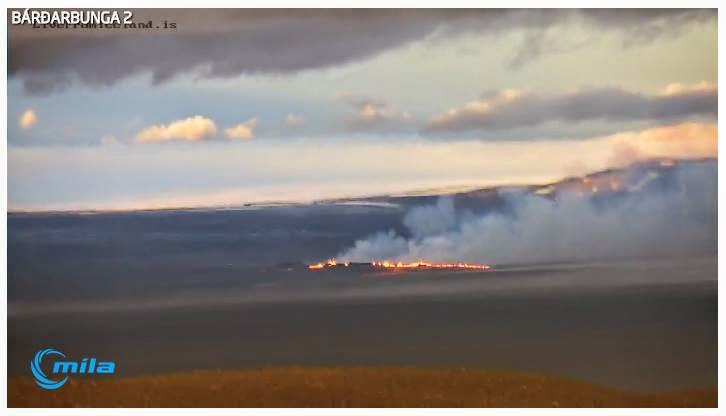 View of the eruptive fissure this morning (Mila webcam 2)
Bardarbunga (Iceland): According to local news, the lava flows have already reached more than 3 km distance from the fissure vent. The eruption is much stronger than the previous one on Friday, with up to 10 times lava output. Read all
Suwanosejima volcano (Tokara Islands, Japan): new eruptions
Sun, 31 Aug 2014, 16:57 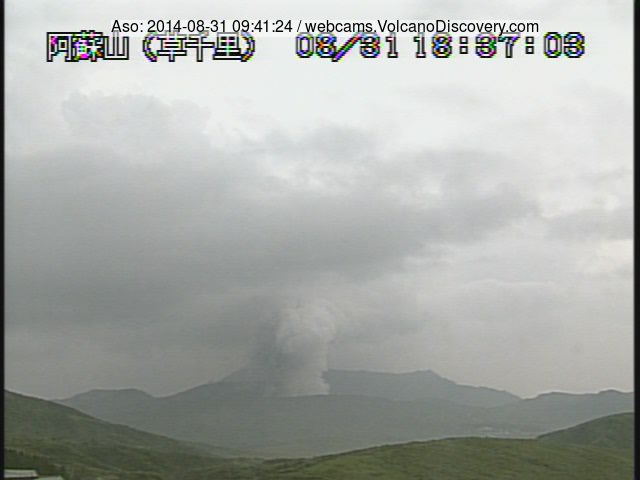 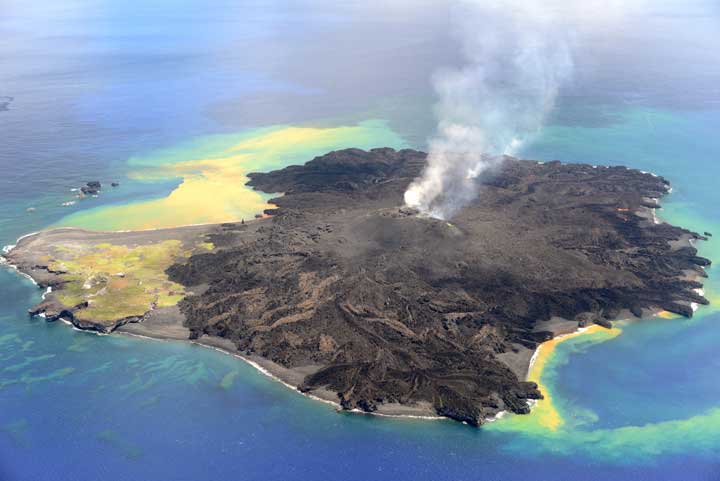 View of the Nishino-Shima island from the west on 26 Aug (Japanese Coast Guard)
The island remains active and continues to grow as lava flows add new land to it. The Japanese Coast Guard made another survey flight on 26 August and observed ongoing effusive and explosive activity in the main crater. Read all
Bardarbunga volcano update: Eruption update
Sun, 31 Aug 2014, 14:40
According to local news, the lava flows have already reached more than 3 km distance from the fissure vent. The eruption is much stronger than the previous one on Friday, with up to 10 times lava output. Read all
to top
Bardarbunga volcano update: Eruption continues - status update
Sun, 31 Aug 2014, 13:56
According to IMO, "the new eruption started in Holuhraun shortly after 04 AM, on the same volcanic fissure, which erupted earlier this week. The fissure is estimated to be 1,5 km long. Read all
Bardarbunga volcano update: New fissure eruption started
Sun, 31 Aug 2014, 07:07

View of the eruptive fissure this morning (Mila webcam 2)
A new eruptive phase has started at the same fissure that had been briefly active Friday morning. Read all
Show more
Bardarbunga volcano update: GPS data show deformation of area - up to 50 cm horizontal spreading so far
Sat, 30 Aug 2014, 22:44 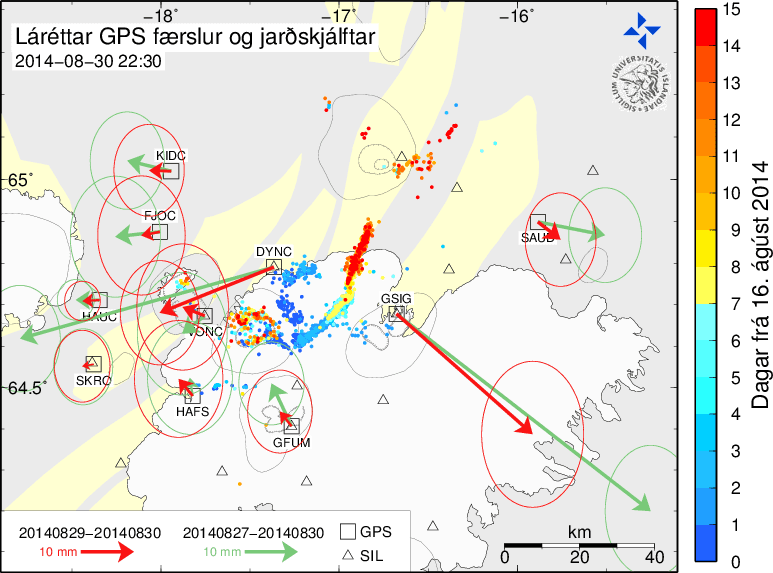 The image shows earthquakes and GPS-displacements together in one picture. The earthquakes have different colours representing how long it's been since they were measured. GPS displacements are shown with black arrows. The circles around the arrows represent uncertainty in the measurements.
The Icelandic Met Office has published two maps showing the (ongoing) mostly horizontal deformation, as evidenced by GPS measurements, in the Bardarbunga area during the past 3 days as well as since the beginning of the crisis. In just 2 weeks, the distance between the DYNC station (western side of the rift) and GSIG (eastern side) has increased by almost 50 cm! 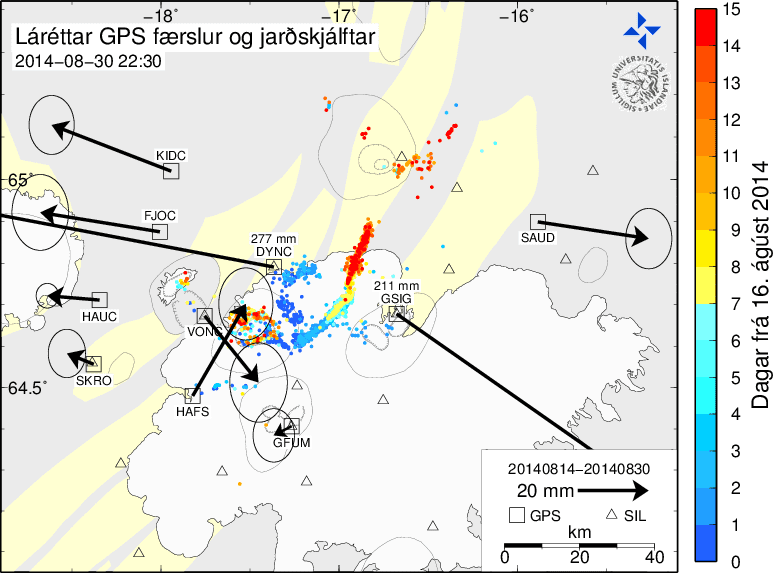 Deformation since the beginning of the crisis (not all stations started exactly at the same time, but the overall picture is correct)
Volcanic activity worldwide 30 Aug 2014: Stromboli volcano, Bardarbunga, White Island
Sat, 30 Aug 2014, 21:00 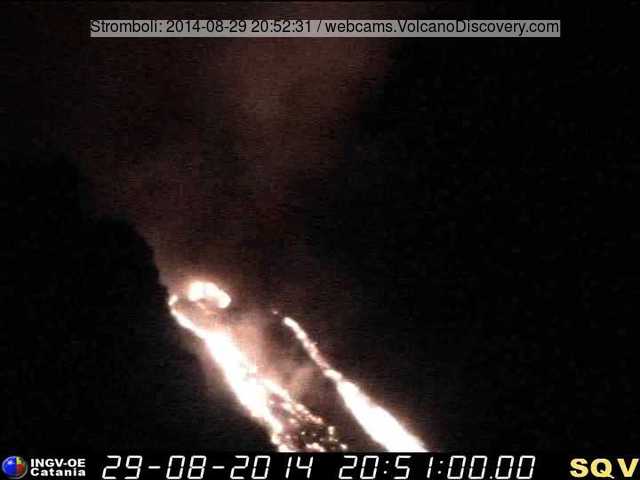 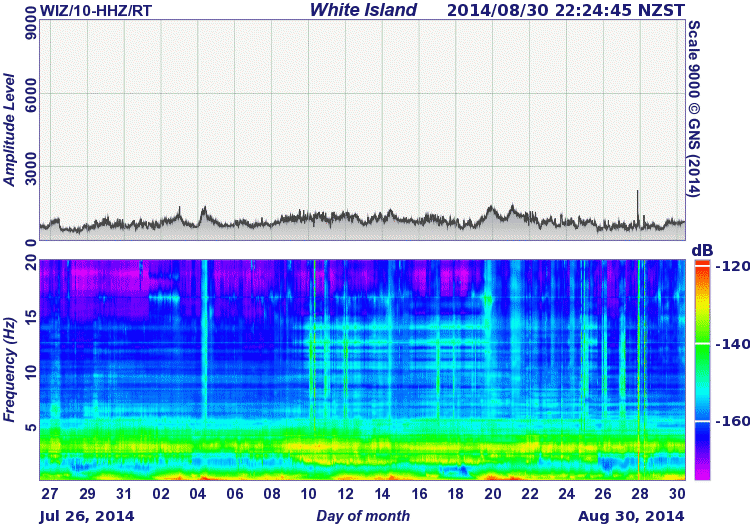 Seismic spectrum over the past 30 days (GeoNet)
A swarm of small earthquakes was detected on Thursday near White Island, New Zealand scientists monitoring the volcano reported. The largest event is magnitude 3.3 and was located within 5km of the island. Read all
Stromboli volcano (Eolian Islands, Italy): continuing well-alimented lava flows
Sat, 30 Aug 2014, 07:23

Lava flows on the Sciara del Fuoco last evening
The effusive eruption continues with little changes and no signs of ending soon. The effusion rate is fluctuating, but elevated and the vent feeds two flows that travel down the Sciara in two channels. Read all
Bardarbunga volcano update: Status update - no significant changes
Sat, 30 Aug 2014, 07:07 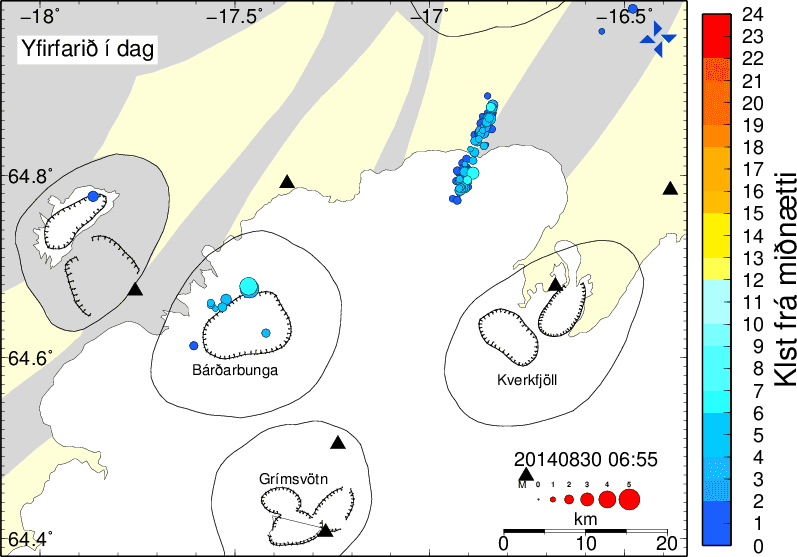 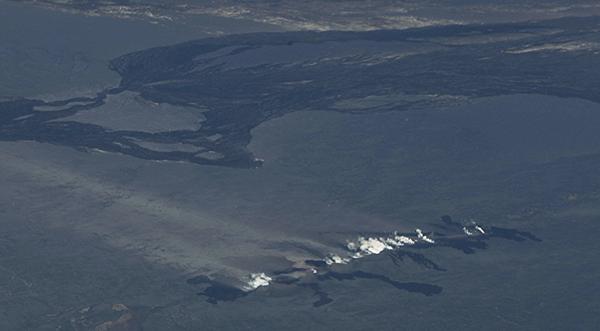 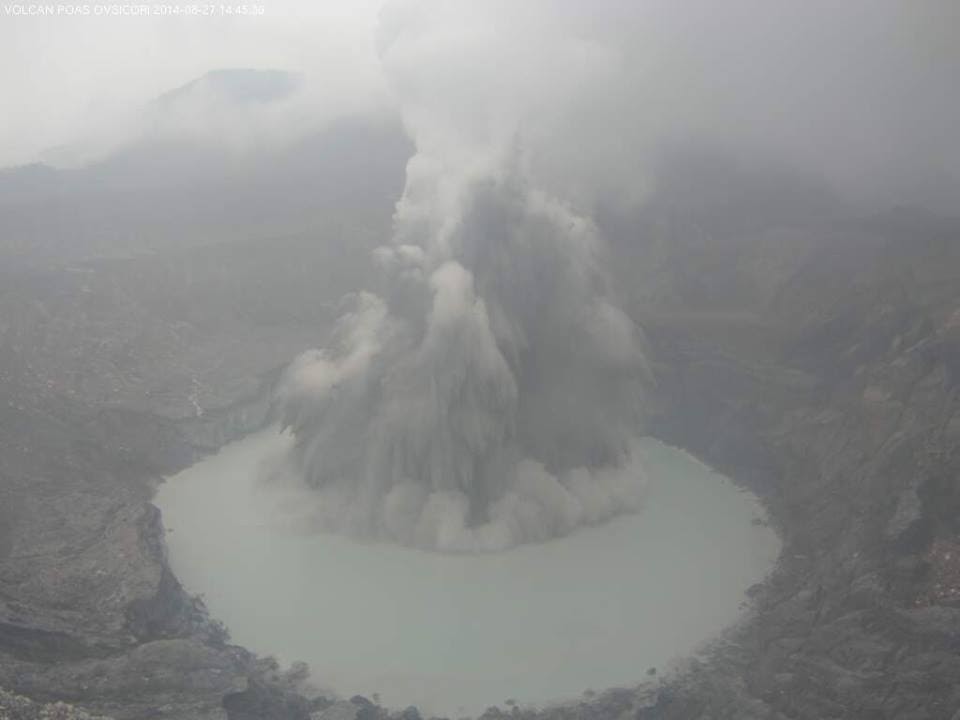 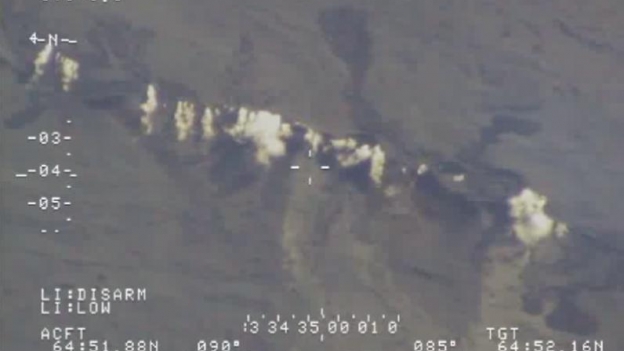 Aerial view of the eruptive fissure this night (Iceland Coast Guard)
First pictures of the new eruptive fissure, taken from a helicopter of the Icelandic Coast Guard were released. They show a row of spatter cones and small lava flows that were erupted from the fissure, about 900 m long and located 5 km from the northern edge of the Dyngjuköll glacier. Read all
Bardarbunga volcano update: Eruption just a precursor to a bigger one?
Fri, 29 Aug 2014, 07:14 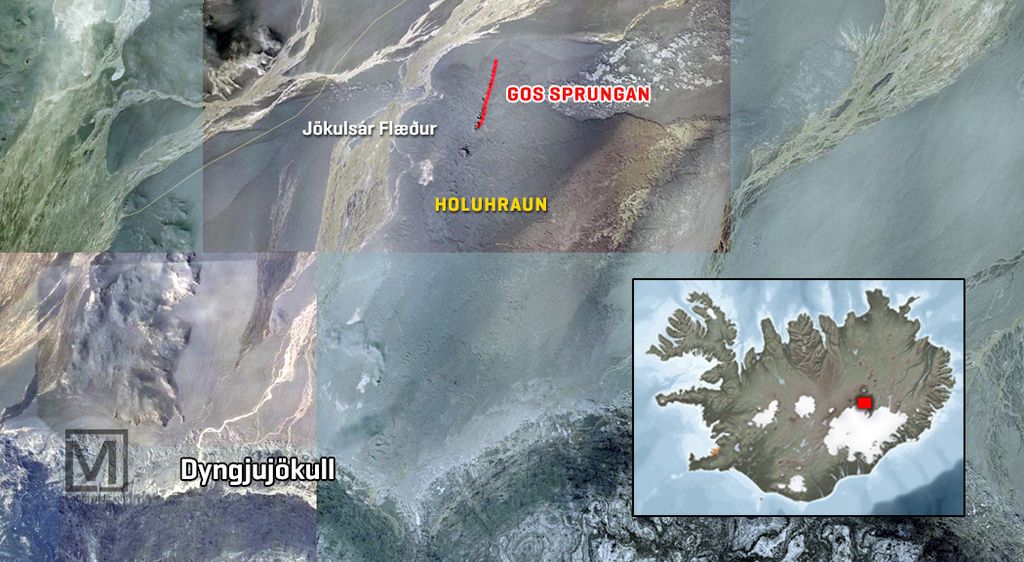 Location of the eruptive fissure this morning (RUV)
An exclusion zone 1.5 km above and 15 km around the eruption site is in place. Read all
to top
Show more
Tavurvur volcano (Rabaul, Papua New Guinea): large explosive eruption, ash to 60,000 ft
Fri, 29 Aug 2014, 06:31 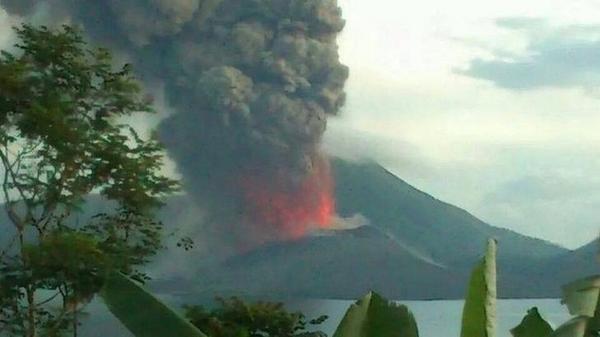 Lava fountains and ash column from Tavurvur volcano (image: Emma Edwards via Mark Tarello @mark_tarello / twitter)
A large explosive eruption began at Tavurvur volcano (Rabaul caldera) this morning. Read all
Bardarbunga volcano update: Small fissure eruption
Fri, 29 Aug 2014, 05:50
An eruption started in Holuhraun north of Dyngjujökull at around 00:02. Seismic tremor was observed on all seismic stations and the web camera installed in the area by Mila has showed some nice pictures of the eruption. It is a small fissure eruption and at 02:40 AM the activity appears to have decreased. (IMO) Read all
Volcanic activity worldwide 28 Aug 2014: Bardarbunga volcano, Slamet
Thu, 28 Aug 2014, 21:00 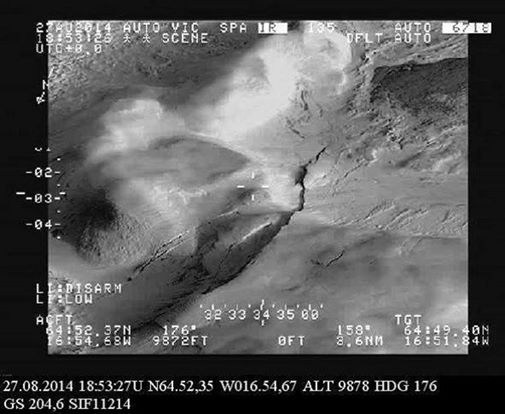 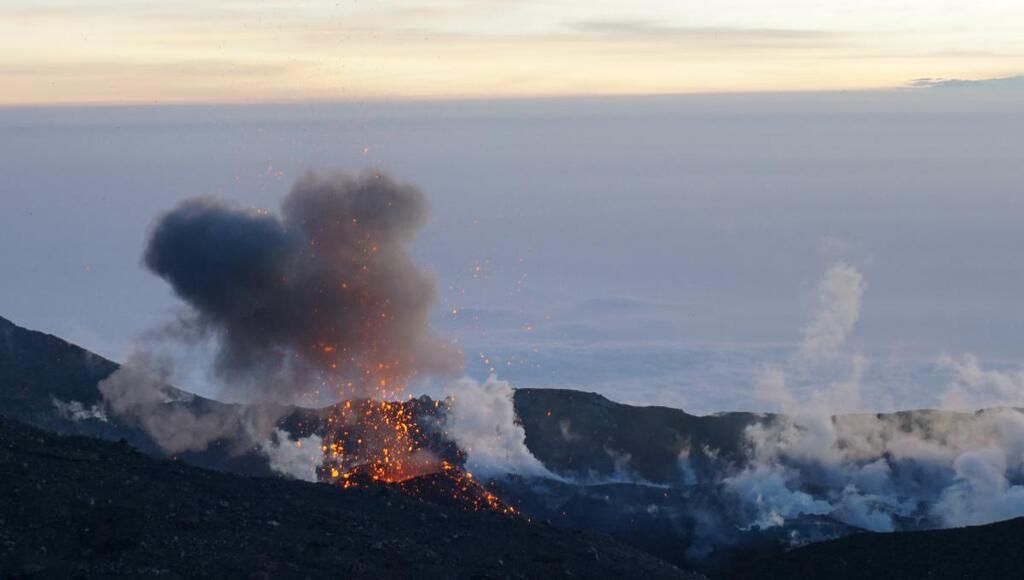 Image of one of the ice cauldrons (image: Civil Protection)
Speculations that a small eruption had occurred or still continues at the site of the new ice cauldrons continue. According to an interview with the National Broadcast (RUV), scientists estimate that 30 - 40 million cubic metres of ice have been melted. Read all
Bardarbunga volcano update: New cauldrons in the Vatnajokull glacier - signs of possible eruption?
Thu, 28 Aug 2014, 00:44
There are new developments, but uncertain how to interpret the visible signs: Read all
Volcanic activity worldwide 27 Aug 2014: Stromboli volcano, Bardarbunga, Kilauea, Sabancaya, Fuego, ...
Wed, 27 Aug 2014, 17:05 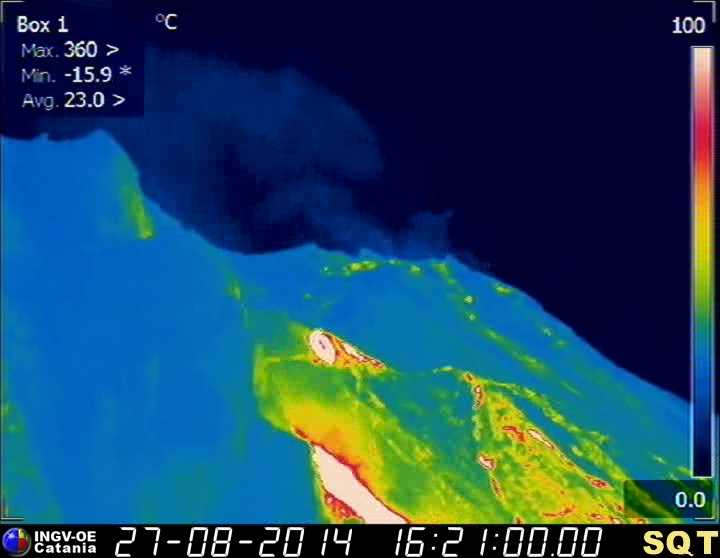 Thermal image of the upper Sciara del Fuoco of Stromboli
Stromboli (Eolian Islands, Italy): The lava flow in the new channel at the eastern side of the Sciara del Fuoco remains well alimented. After a calmer weak, it is now again reaching the sea, at least intermittently. Read all
to top
Bardarbunga volcano update: Magnitude 4.0 under Askja caldera
Wed, 27 Aug 2014, 16:57 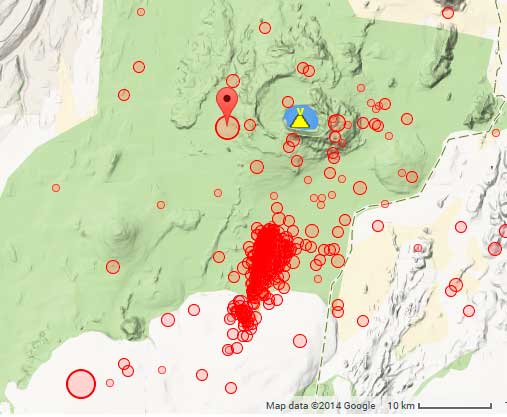 Today's earthquakes in the Dyngjujökull glacier and Askja (triangle) area
Over 800 earthquakes have occurred today so far, mostly now beyond the edge of the Dyngjujökull glacier. The crisis is showing no signs of decreasing. The intrusion itself has migrated about 1 km northwards since yesterday, and approaches the Asjka volcanic complex, which is a worrying development. A magnitude 4 earthquake occurred this morning under the eastern caldera rim of Askja (s. image). Read all
Batu Tara volcano (Sunda Islands, Indonesia) activity update
Wed, 27 Aug 2014, 16:37
A new ash plume extending approx. 50 km NW was reported yesterday on satellite imagery by Darwin VAAC. Read all
Show more
Volcano Blog
Mon, 27 Jun 2022, 09:12
Science Spotlight: Geothermal Colors

Popocatépetl Volcano Special
The activity of Mexico's most active and largest volcano has been picking up gradually during the past months. If you like to join a small group of volcano enthusiasts, join us, stay 5 nights near the volcano and move around for extended day- and night-time observation.
Kilauea

Kilauea volcano photos
The most active volcano in the world with a record long lasting eruption since 1983: images of lava flows, lava lakes, explosions, lava meeting the ocean, aerials and more.
Lava lakes

Erta Ale volcano photos
During our numerous expeditions to Erta Ale and Dallol, we have documented the active lava lake and its surroundings and changes over the years.
Get the ad-free version!
Why is there advertising on this site?
Support us - Help us upgrade our services!
We truly love working to bring you the latest volcano and earthquake data from around the world. Maintaining our website and our free apps does require, however, considerable time and resources.
We need financing to increase hard- and software capacity as well as support our editor team. We're aiming to achieve uninterrupted service wherever an earthquake or volcano eruption unfolds, and your donations can make it happen! Every donation will be highly appreciated. If you find the information useful and would like to support our team in integrating further features, write great content, and in upgrading our soft- and hardware, please make a donation (PayPal or Online credit card payment).