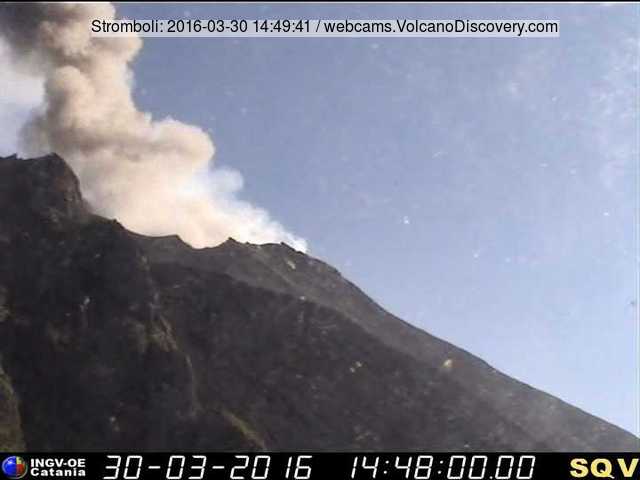 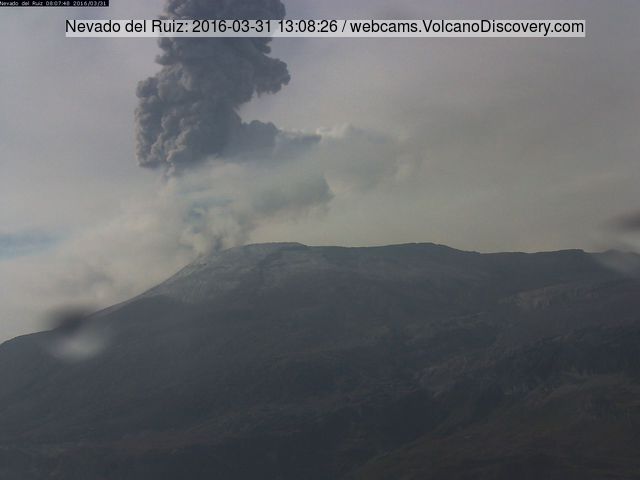 Ash column from Nevado del Ruiz volcano this morning
A moderately strong explosion occurred at the volcano this morning at 08:04 local time, producing an ash column that rose 3,500 m to 30,000 ft (9 km) altitude and drifted NW. Read all
Show more
Pavlof volcano (Alaska Peninsula): eruption decreases
Thu, 31 Mar 2016, 16:37
The eruption of the volcano has "greatly diminished in intensity over the past day", AVO reported: Read all
Zhupanovsky volcano (Kamchatka): intermittent, but sometimes strong ash emissions
Thu, 31 Mar 2016, 12:05
KVERT reported that moderate activity at Zhupanovsky continued during 18-25 March. According to KVERT, the Tokyo VAAC noted that an explosion generated an ash plume that rose to an altitude of 8 km (26,200 ft) a.s.l. at 0120 on 25 March. Read all
to top
Nevados de Chillán volcano (Chile): new ash emissions
Thu, 31 Mar 2016, 10:21 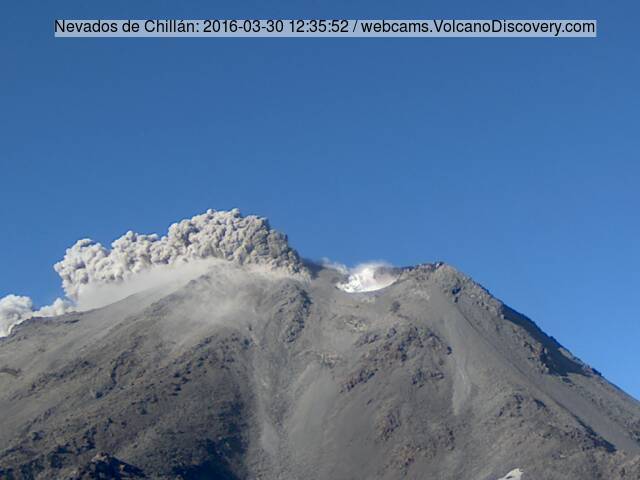 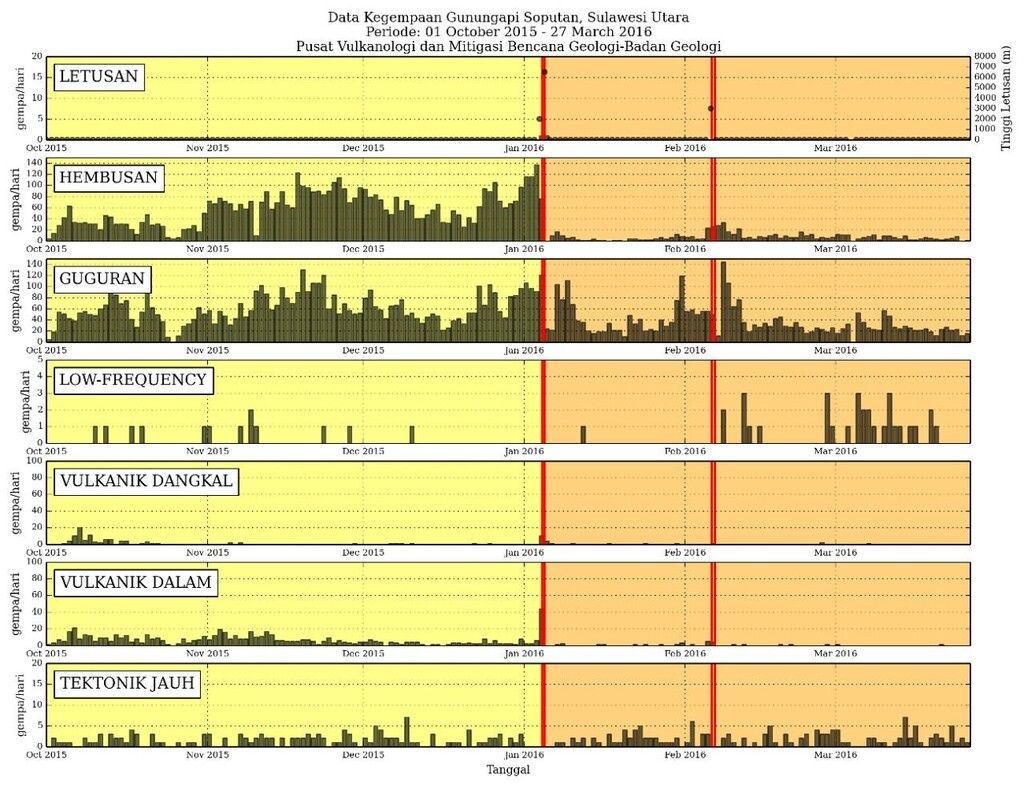 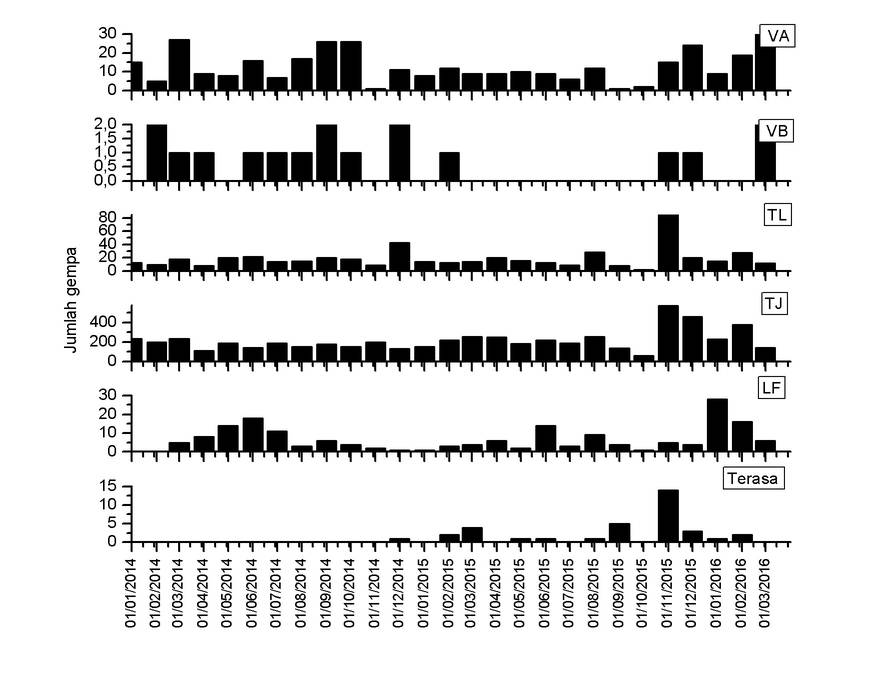 Summary of Makian's seismic activity since Jan 2014 (VSI)
Seismic unrest continues at the volcano with a weak tendency of increase in shallow volcanic earthquakes during the past weeks, possibly related to the ascent of a new magmatic body. Read all
to top
Colima volcano (Mexico): activity decreases
Thu, 31 Mar 2016, 08:46 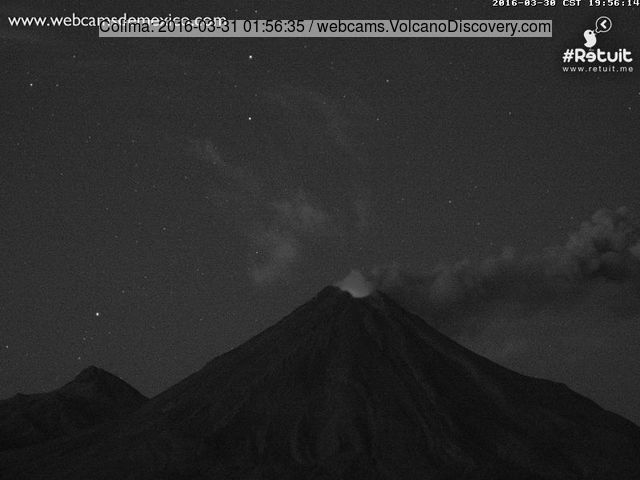 Weak explosion at Colima this morning
The activity of the volcano has decreased overall. Explosions have been mostly weak and relatively rare (a few per day) and the previously continuously visible glow at the summit crater, indicative of the small new lava dome, has recently been visible only during increased degassing or explosion events. Read all
Popocatépetl volcano (Central Mexico) activity update
Thu, 31 Mar 2016, 08:33 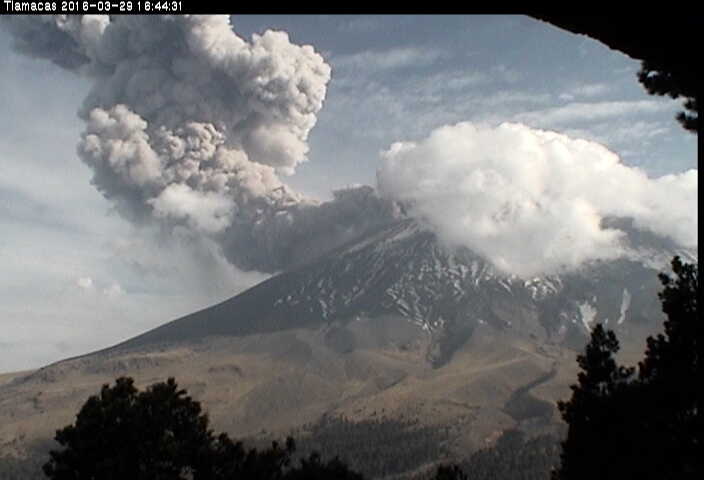 Strong explosion at Popocatépetl Tuesday afternoon
No significant changes in activity have occurred at the volcano recently despite a series of stronger explosions during the past days. One explosion on Tuesday afternoon generated an ash plume that rose up to 3.5 km, and another one during the following night was seen ejecting abundant incandescent material outside the summit crater. Read all
Show more
Stromboli volcano (Eolian Islands, Italy): low activity
Thu, 31 Mar 2016, 08:12

Ash plume from a small eruption at Stromboli yesterday (INGV Catania webcam)
The activity at the summit craters has been (comparably very) low recently. However, small strombolian explosions continue to occur at irregular rates of 30-60 minutes intervals, mainly from western vent. 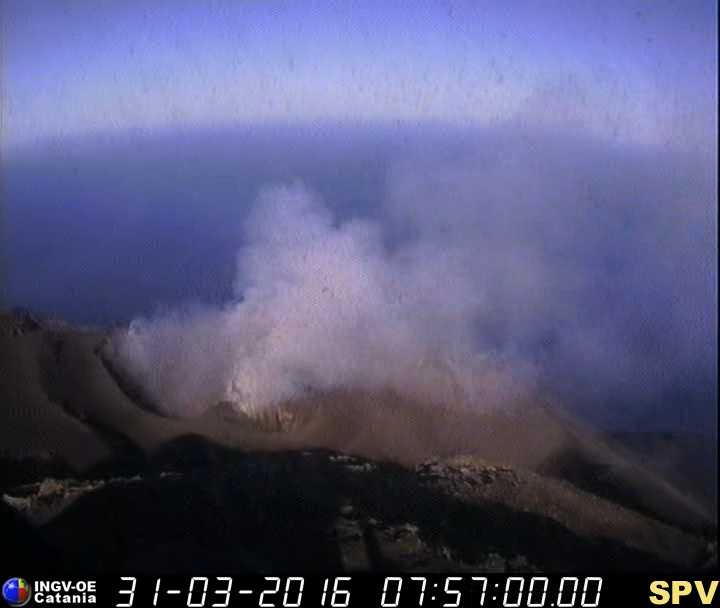 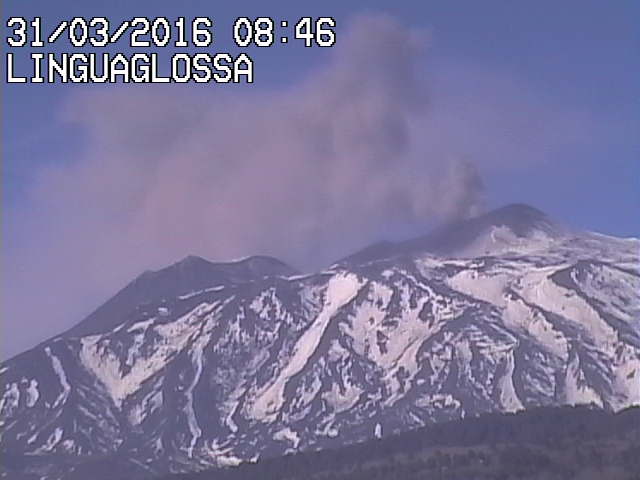 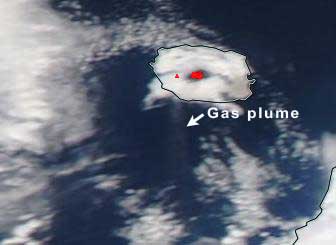 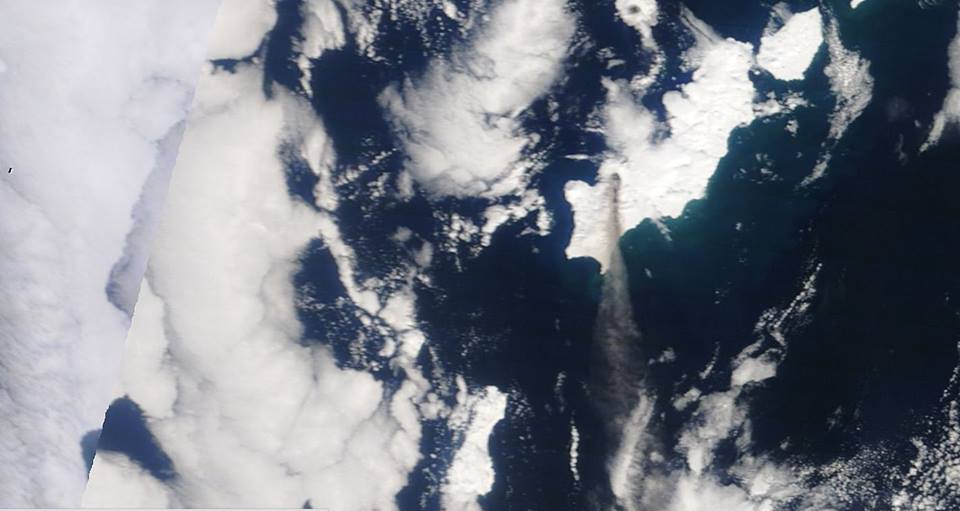 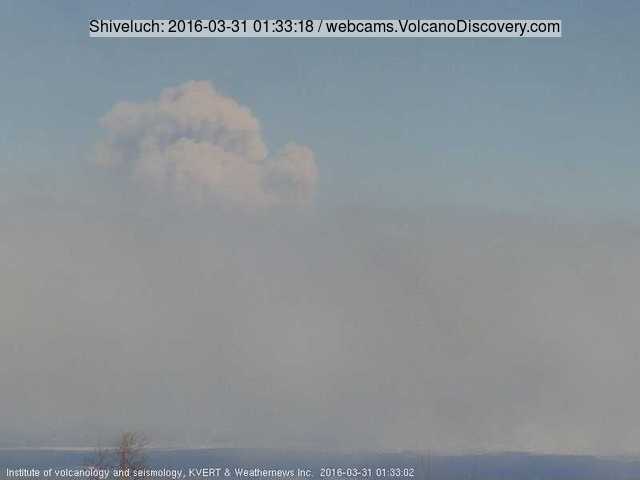 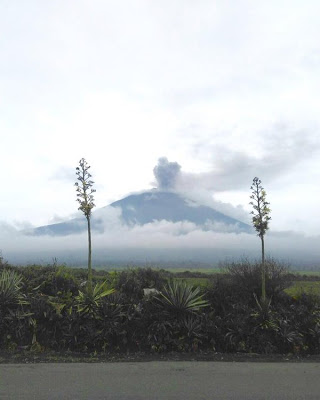 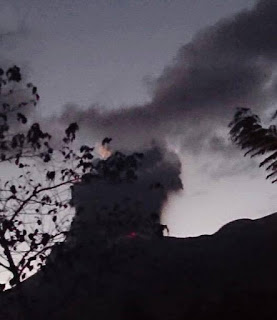 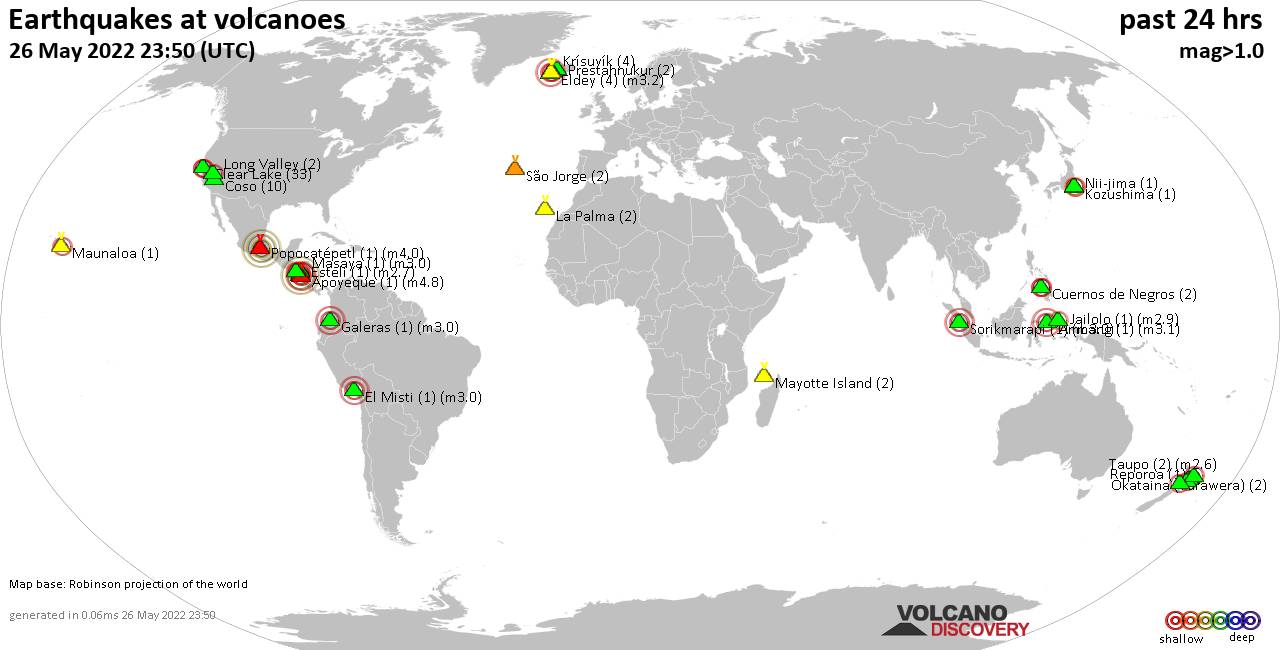 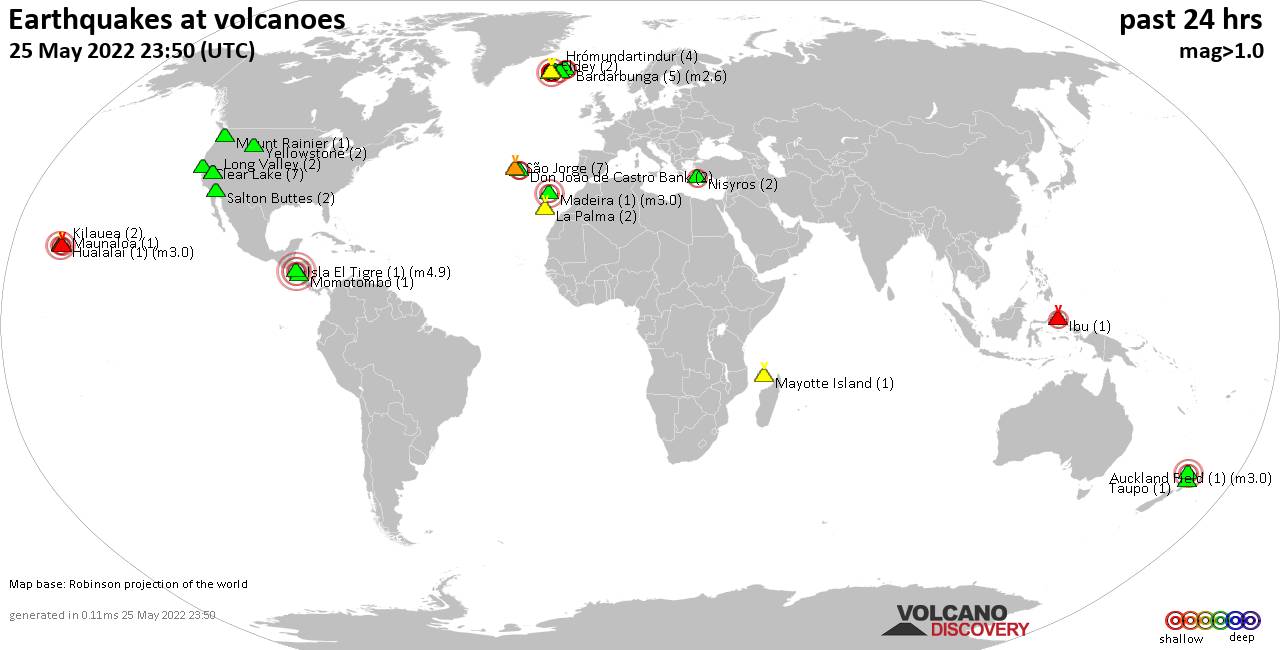 Eruption from close
On 17 Oct, explosions were particularly violent at Anak Krakatau. We show a series of images of a spectacular explosion captured from close range by boat.
Volcano Videos