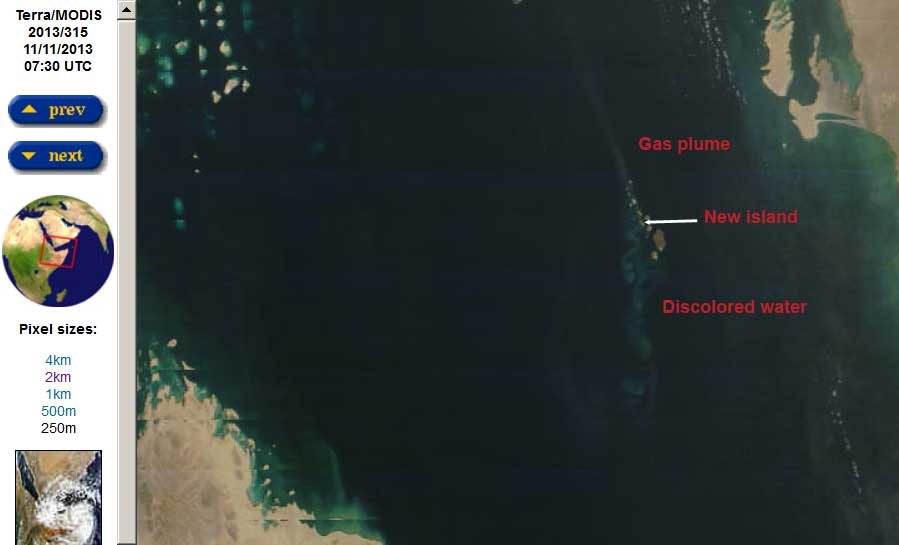 A new island appeared in the Zubair archipelago on or before 23 Oct (Google Earth image for comparison) (source: Blog Culture Volcan)
A new island has emerged in late Oct at the submarine eruption site, but the exact date is currently not known. At the moment, satellite images do not allow to determine whether eruptive activity at the island continues, but suggest that it is currently low or has stopped. If any, it might be strombolian or the effusion of small lava flows. The last ash /steam plume was spotted a MODIS satellite image on 30 Oct.
Jebel Zubair volcano (Red Sea, Yemen) activity update
Thu, 17 Oct 2013, 10:49 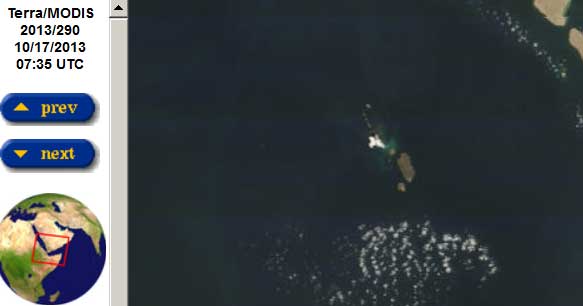 SO2 plume from Zubair volcano (NOAA)
The submarine eruption continues. A small steam plume continued to rise from the new eruption site this morning and an SO2 plume hovers above the area.
Jebel Zubair volcano (Red Sea, Yemen) activity update
Fri, 11 Oct 2013, 17:23 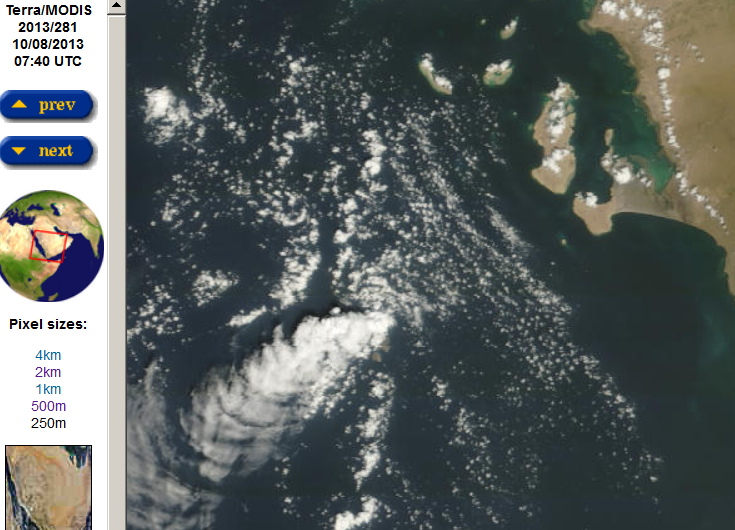 Steam plume from Zubair in the Red Sea on Tuesday (8 Oct)
As of today, the submarine eruption continues with the production of a steam plume of variable size, not always easily identifiable on satellite images. A SO2 plume is also visible on satellite data drifting from the eruption site. Read all
Jebel Zubair volcano (Red Sea, Yemen) activity update
Wed, 2 Oct 2013, 07:28 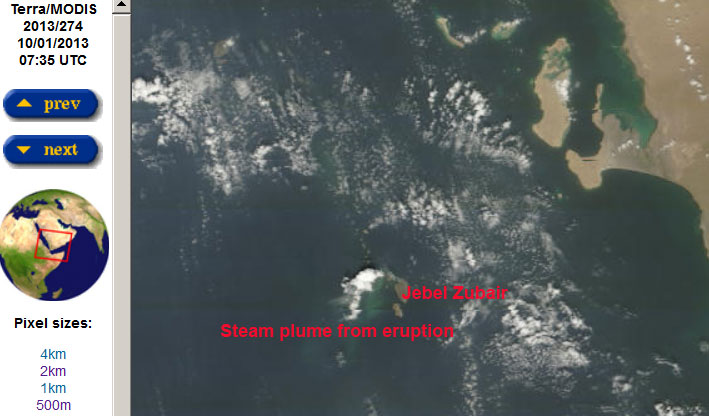 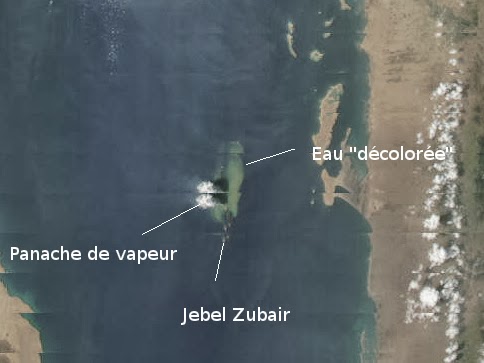 Steam plume and discolored water around the new submarine eruption site (NASA / Terra satellite image 28 Sep, annotated by Blog Culture Volcan)
A submarine eruption started yesterday (28 Sep) NW of the island Jebel Zubair and SW of the site of the 2011-12 eruption. The activity manifestated itself in form of a strong SO2 anomaly and steam plume spotted on satellite imagery. Read all
to top
New island in the Red Sea stopped erupting
Wed, 18 Jan 2012, 00:01 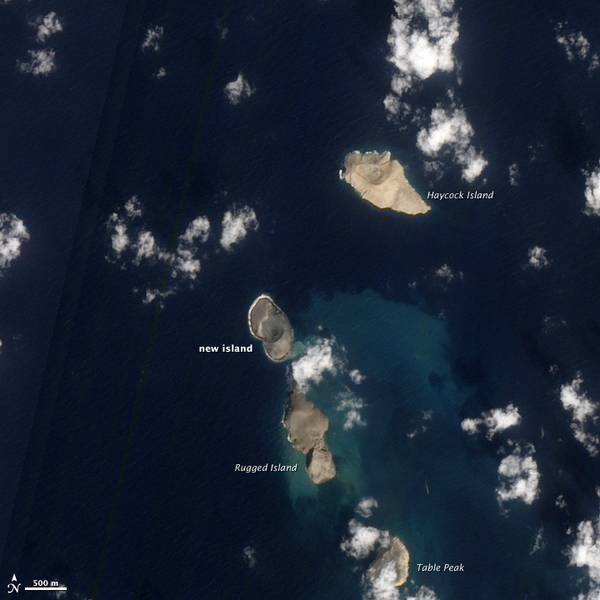 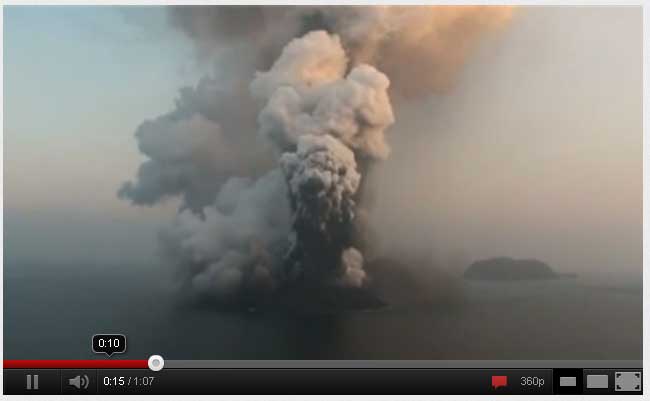 Surtseyan eruption at the newly formed island in the Red Sea
A new dramatic video of the recent volcanic eruption in the Red Sea in the Zubayr group of islands west of Jemen has emerged on youtube. The video was taken from a military helicopter and shows the newly-born island in the highly explosive phase, when magma in contact with sea water lead to very strong steam and ash explosions (so-called surtseyan activity), producing huge ash and steam clouds. Unfortunately, the date of the video is not specified, but it is probably from around 22-23 December.
to top
Zubair Group volcano (Yemen) - Smithsonian / USGS Weekly Volcanic Activity Report for 4 January-10 January 2012 (New Activity / Unrest)
Wed, 4 Jan 2012, 06:00
A satellite image acquired on 7 January showed the newly-formed island in the northern part of the Zubair Group. The island had grown to about 530 x 710 m, and a gas-and-steam plume containing ash rose from a distinct cone. Read all
New island born in the Red Sea at the Zubair archipelago (Jemen)
Wed, 28 Dec 2011, 20:19 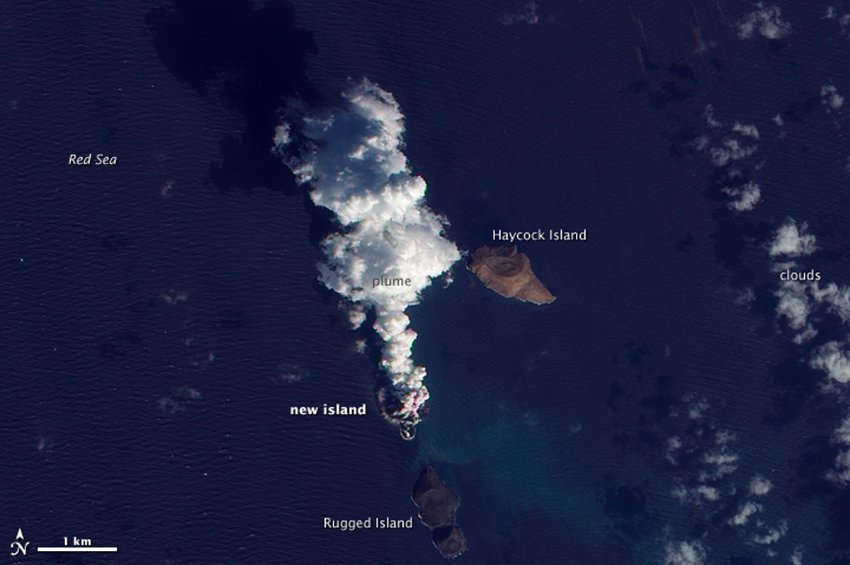 The new island in the Red Sea seen on 23 Dec 2011 (NASA Earth Observatory)
NASA satellite images show that the eruption in the Red Sea in the Zubair archipelago has produced a new island. The island is circular, about 500 m wide and located about 1 km north of Rugged Island. It consists of fresh probably basaltic lava flows and an active vent seems to be in its center. Read all
Volcanic Eruption in the Red Sea (Yemen) reported
Wed, 21 Dec 2011, 08:15 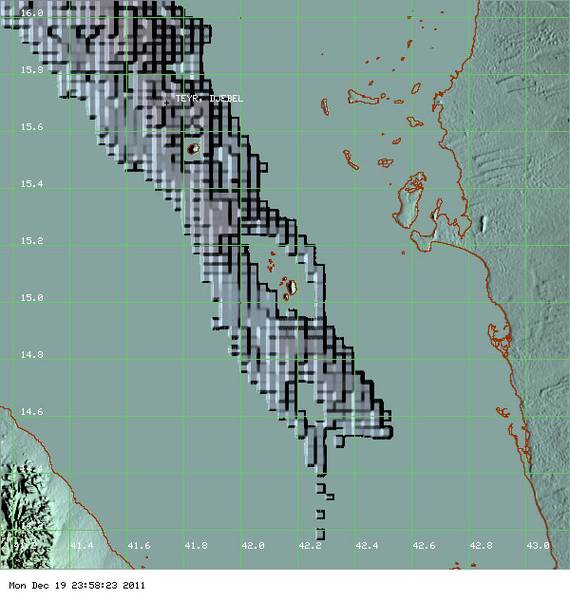 Foto tour Santorini April 2017
A selection of images taken during our photo tour on Santorini. We offer customized small-group photography tours and workshops on the beautiful island of Santorini.
Milos Geo Tour

Island of Venus
Milos Island in Greece is one of the most beautiful and photogenic islands of the Mediterranean. Its boasts breathtaking scenery of colorful volcanic rocks, some of the finest beaches of the country, a rich archeological heritage, great hospitality and delicious local cuisine. Come join us to explore this magical island on a 6-days geological tour!
Volcano Database

Volcanoes & Earthquakes
Look up active volcanoes and earthquakes worldwide on our web-app, featuring an interactive map you can embed on your website or use as stand-alone tool.
Get the ad-free version!
Why is there advertising on this site?
Support us - Help us upgrade our services!
We truly love working to bring you the latest volcano and earthquake data from around the world. Maintaining our website and our free apps does require, however, considerable time and resources.
We need financing to increase hard- and software capacity as well as support our editor team. We're aiming to achieve uninterrupted service wherever an earthquake or volcano eruption unfolds, and your donations can make it happen! Every donation will be highly appreciated. If you find the information useful and would like to support our team in integrating further features, write great content, and in upgrading our soft- and hardware, please make a donation (PayPal or Online credit card payment).