The majestic El Misti volcano is Peru's most known and one of its most active volcanoes. It is an andesitic symmetrical stratovolcano that dominates the town of Arequipa, only 16 km to the SW, and its proximity to Peru's second largest city as well its history of explosive eruptions make it one of the world's most dangerous volcanoes.

Similar to Vesuvius in Italy, the present-day El Misti was built within a small 1.5 x 2 km wide summit caldera that formed between about 13,700 and 11,300 years ago. It has 2 concentric summit craters. The outer crater measures 830 m in diameter and contains a 450 m wide scoria cone with the inner crater on its top.
There were several large explosive eruptions in the past few 1000 years, and more than 20 subplinian to plinian eruptions within the past 50,000 years, that caused heavy tephra fall and pyroclastic flows traveling up to 12 km.
All historic eruptions had been small explosive events from the summit cone that only affected the upper areas of the volcano, covering it with ash and scoria, and an ash fall field that extends up to 20 km.


April 1984 gas emissions
In early April 1984, gas and steam emissions increased at the crater of El Misti, creating a plume of 1 km height. Scientists who tried to collect samples on 29 April were prevented by doing so due to the high levels of irritating gasses (SO2 ?).


1985: new fumaroles
On 7 and 8 August 1985 geologists observed vigorous new fumaroles on the N side inside El Misti's crater. Highly pressurized gasses escaped with lots of noise from 6 new vents and red (liquid?) and yellow (solid) sulphur deposits were observed in and around the vents.
(USGS/GVP monthly reports)


1971 gas emissions
Elevated gas and steam emissions occurred from the crater of El Misti volcano in 1971.


310 BC (sub)plinian eruption
The last major eruption of El Misti was about 2000-2300 years ago. It deposited a significant pumice layer which is 30 cm thick at 13 km distance from the volcano and extends 25 km SW. A similar event today would be a major hazard for the city of Arequipa.
Derniers images satellite IGP reported that the warning system at the volcano detected the decrease of a lahar (volcanic mud flow) of a low to moderate volume that traveled downslope in SE direction due to the streams that run through this sector. ... Read all
ven., 17 janv. 2014, 07:40
El Misti volcano (Peru): signs of volcanic unrest, earthquake swarm during 14-15 January 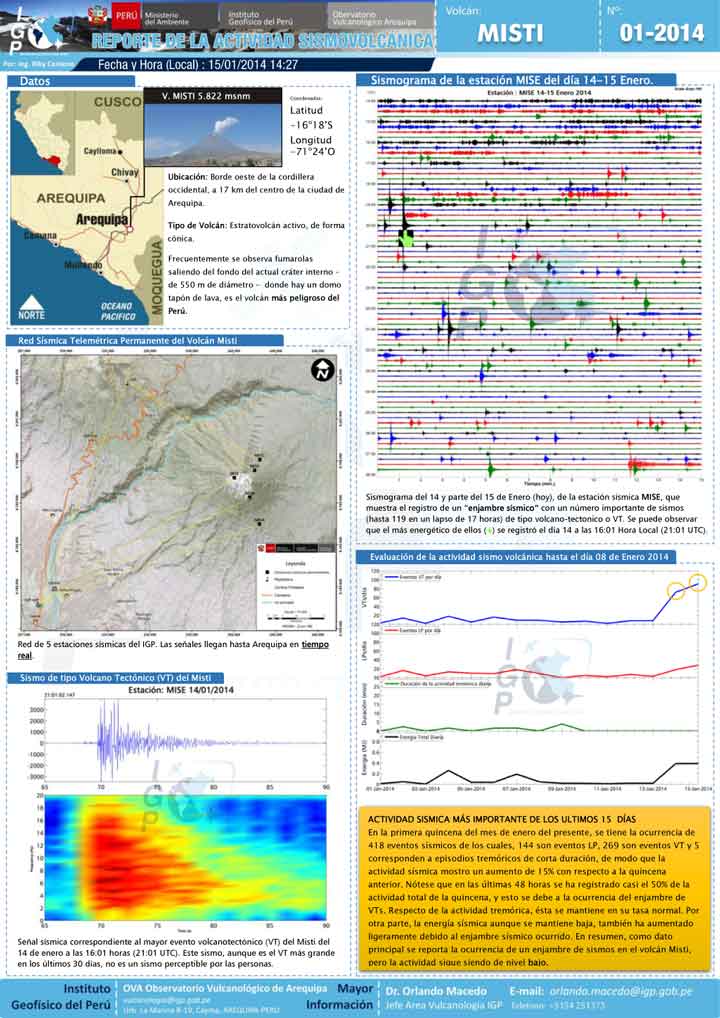 The volcano experienced an earthquake swarm during 14-15 January, IGP reported in its latest bulletin. An increase of approx. 25% in seismic activity overall with respect to last year's average was calculated, but IGP stresses that this activity is still low and does not suggest new activity in a near future. ... Read all
Découvrez notre app gratuite !

Sakurajima volcano photos
One of the world's most active volcanoes, Sakurajima on Japan's Kyushu Island is famous for its frequent vulcanian explosions, often accompanied by eruption lightning.
Batu Tara

Batu Tara photos
A remote island in the Flores Sea of Indonesia formed by a single volcano that has been in strong strombolian eruption for years. We regularly lead expeditions to there where we camp several days to observe it.
Support us
If you find the website useful and would like to support us and help keep it alive and improve it, please consider making a small donation. Thank you!
Volcano Tours

Volcano Expeditions
Witnessing a volcanic eruption from close is an unforgettable experience. We offer a wide variety of tours and expeditions to active volcanoes worldwide.
Yellowstone quakes

Latest earthquakes under Yellowstone volcano
List and interactive map of current and past earthquakes near Yellowstone volcano.
Why is there advertising on this site?
Support us - Help us upgrade our services!
We truly love working to bring you the latest volcano and earthquake data from around the world. Maintaining our website and our free apps does require, however, considerable time and resources.
We need financing to increase hard- and software capacity as well as support our editor team. We're aiming to achieve uninterrupted service wherever an earthquake or volcano eruption unfolds, and your donations can make it happen! Every donation will be highly appreciated. If you find the information useful and would like to support our team in integrating further features, write great content, and in upgrading our soft- and hardware, please make a donation (PayPal or Online credit card payment).