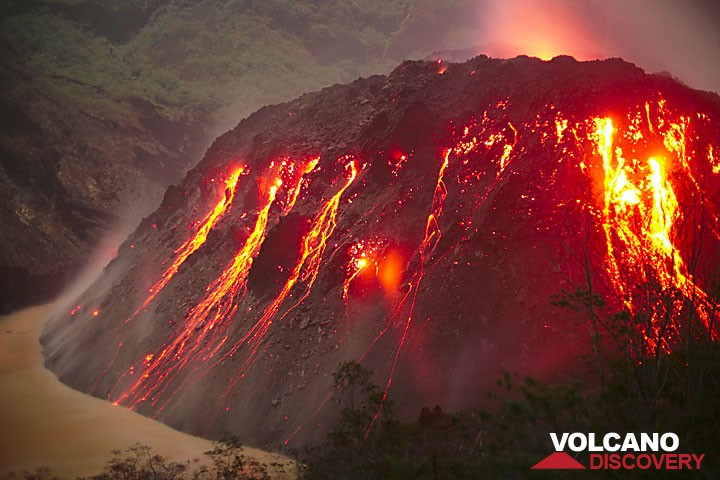 Kelud volcano (also spelled Kelut) is one of East Java's most active volcanoes. The volcano has a spectacular large crater that contains a lake, which was a popular weekend destination but also the origin of devastating mud flows (lahars). In Oct-Nov 2007, a new lava dome grew within the lake to form an island, replacing most of the water.
Kelut is notorious among Indonesia's volcanoes for its violent, and often deadly explosive eruptions. One of the worst volcanic disasters occurred during the 1919 eruption, when the (then very large) crater lake drained and formed lahars that killed at least 5160 people. An eruption in 1586 is believed to have caused even more than 10,000 fatalities.

The relatively inconspicuous, 1731-m-high Kelud stratovolcano contains a summit crater lake that has been the source of some of Indonesia's most deadly eruptions.
A cluster of summit lava domes cut by numerous craters has given the summit a very irregular profile. Satellitic cones and lava domes are also located low on the eastern, western, and SSW flanks. Eruptive activity has in general migrated in a clockwise direction around the summit vent complex. More than 30 eruptions have been recorded from Gunung Kelud since 1000 AD. The ejection of water from the crater lake during Kelud's typically short, but violent eruptions has created pyroclastic flows and lahars that have caused widespread fatalities and destruction.
After more than 5000 persons were killed during an eruption in 1919, an ambitious engineering project sought to drain the crater lake. This initial effort lowered the lake by more than 50 m, but the 1951 eruption deepened the crater by 70 m, leaving 50 million cubic meters of water after repair of the damaged drainage tunnels.
After more than 200 deaths in the 1966 eruption, a new deeper tunnel was constructed, and the lake's volume before the 1990 eruption was only about 1 million cubic meters. 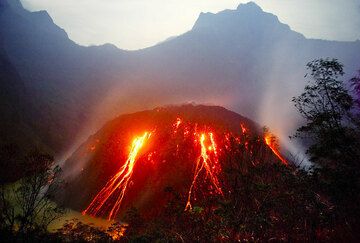 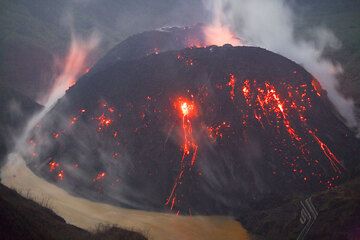 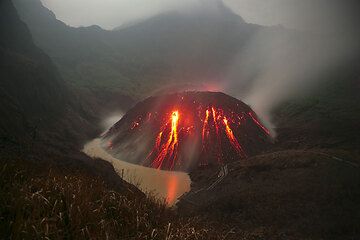 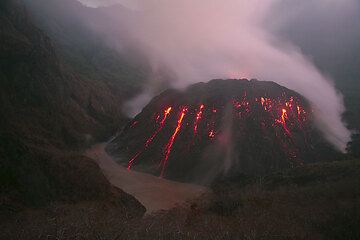 13 Feb 2014 explosive eruption
A violent explosion occurred on the evening of 13 Feb 2014, destroying the lava dome.
An ash column rose to 10-15 km altitude and formed a plume of several 100 km length and width that drifted over the Indian Ocean. Heavy ash fall occurred in distances of up to 200 km, and several airports on Java needed to shut down temporarily.
Kelut volcano eruption update La Palma Volcano Special
We offer a short-notice tour to see the eruption on La Palma in a small group guided by a volcanologist (Evelyne Pradal - English and French speaking geologist.)
Etna volcano