1781-85 eruption (Tenmei eruption)
Following a year of increased hydrothermal activity since 1780, earthquakes and small ash eruptions occurred on 3 and 4 May 1781. On 10 and 11 April 1783, a strong strombolian-lava fountain eruption started and built a new scoria cone inside the crater. 61 houses were burned and there were 7 fatalities.
Similarly, on 18 April 1785, strong strombolian eruptions resumed and built a second cone in the crater. The eruption caused 130-140 fatalities (although details are not known), while 163 residents escaped to Hachijo-jima Island. The eruption also produced lava flows inside Ikenosawa Crater.
From historic documents, it seems that by 1787 the eruption had ended.
---
Source:
Takada et al (1992) "Geology of Aogashima Volcano, Izu Islands, Japan", Bulletin of the Volcanological Society of Japan 37(5), pp. 233-250
Derniers images satellite 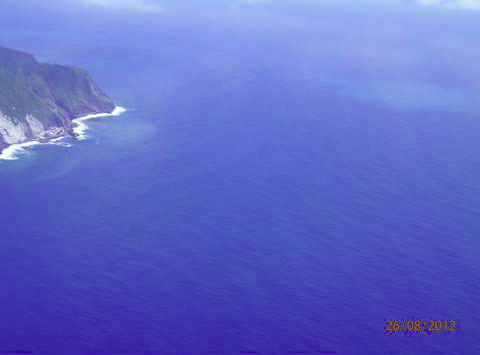 La Palma Volcano Special
We offer a short-notice tour to see the eruption on La Palma in a small group guided by a volcanologist (Evelyne Pradal - English and French speaking geologist.)
Kelut

Kelut volcano photos
A new lava dome grew inside the crater lake during the effusive eruption in late 2007, replacing most of the lake. Watch the birth of a new mountain!
Eyjafjallajökull

Eyjafjallajökull volcano photos
The volcano in Iceland with the unpronounceable name... but famous in 2010 when its ash clouds drifted over Europe and forced a unprecedented large-scale airspace closure for several days, stranding millions of passengers.
Guatemala

Guatemala photos
Guatemala - a land of volcanoes and the colorful Mayan culture with incredible variety. A dream destination for volcano enthusiasts and photographers!
Satellite images

Recent volcano satellite images
Browse quickly through the latest satellite imagery from volcanoes all over the world in order to spot ash clouds and hot spots.
Why is there advertising on this site?
Support us - Help us upgrade our services!
We truly love working to bring you the latest volcano and earthquake data from around the world. Maintaining our website and our free apps does require, however, considerable time and resources.
We need financing to increase hard- and software capacity as well as support our editor team. We're aiming to achieve uninterrupted service wherever an earthquake or volcano eruption unfolds, and your donations can make it happen! Every donation will be highly appreciated. If you find the information useful and would like to support our team in integrating further features, write great content, and in upgrading our soft- and hardware, please make a donation (PayPal or Online credit card payment).