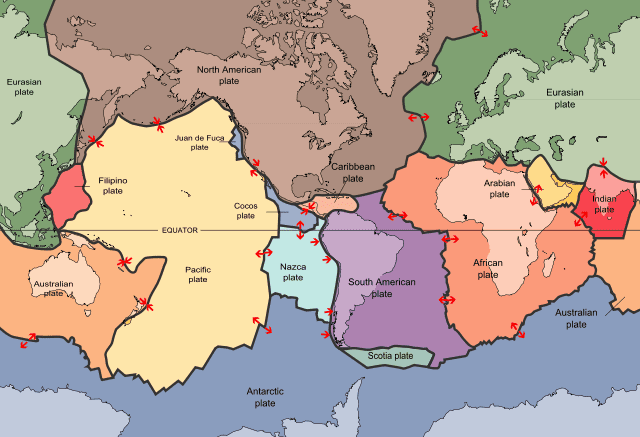 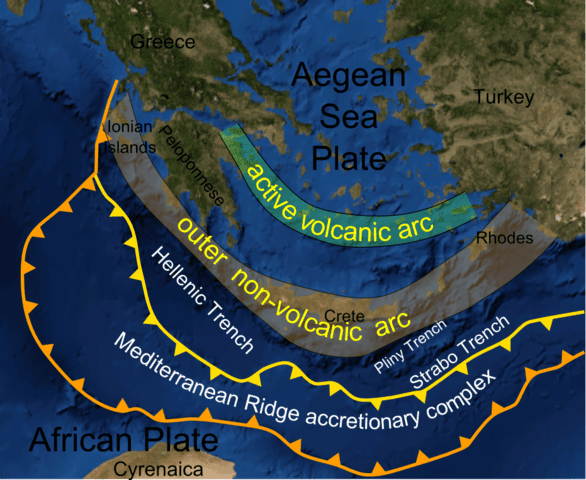 The Aegean and its main features (courtesy: WIkimedia Commons, en.wikipedia.org/wiki/File:Hellenic_arc.png)
The Aegean and its surrounding areas (including the Balkan and Western Turkey) are the most seismically active areas of the whole Mediterranean and in the whole West Eurasia. The reason is that this area is among the most stressed part of the collision zone between the Eurasian and the African tectonic plates.
The most prominent morphological features in this area from south to north are: the Mediterranean ridge (or chain), the Hellenic trench, the Hellenic arc and the northern Aegean trough.
The island of Crete represents an uplifting sedimentary fore-arc zone located north of the subduction zone in the transition between the African and Eurasian plates.
The Hellenic arc parallels the subduction zone at a distance of about 120 km to the north, and contains several active volcanic centers (Methana, Santorini, Nisyros, the Bodrum Peninsula).
The Cretan Trough is a depression between Crete subject reaching a depth of about 2000 m.
The most interesting feature of the northern Aegean is the northern Aegean trough, which reaches depths to about 1500 m. Its extension to the NE includes probably the small depressions of the Marmara Sea. 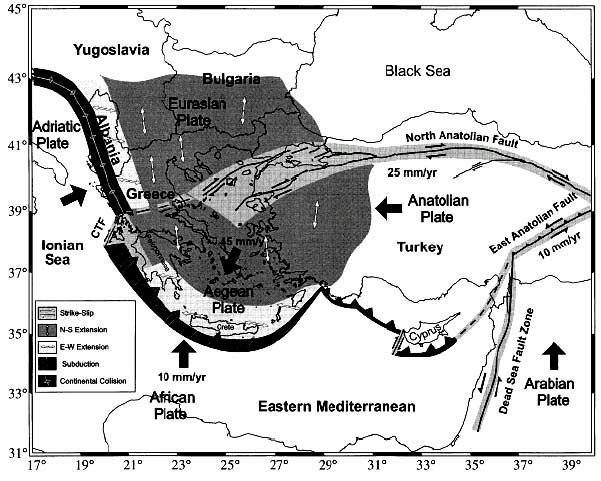 Seismicity of the Eastern Mediterranean region showing quakes during 1973–2007 with magnitudes for M3 and larger. The relatively seismic inactive zone of the Cyclades is seen clearly. (Taymaz et al. 2007)

Fascination Volcano
Discover with us the fascinating natural history of Santorini volcano in Greece on this walking and study tour.
Vesuvius volcano

Look up recent and past quakes worldwide or by selecting an area on the map!
Greece

Photos from Greece
We have traveled all over Greece, in particular on its active volcanic areas such as Santorini, Nisyros, Milos, Methana.
Fuego