Kizimen volcano is an isolated, conical stratovolcano located in the Shchapina graben on the SE margin of the Central Kamchatkan Valley. After almost a century of quiet, it started to become restless in 2009 and erupt in late 2010. The new ongoing eruption has been building a new lava dome on the summit, and producing violent pyroclastic flows and ash plumes several kilometer high. The area around the volcano is unpopulated and the eruptions have therefore not caused damage.

Kizimen's shape is similar to Mount St. Helens before the massive 1980 eruption. The northwestern side of Kizimen volcano is cut by NE-SW-trending normal faults, which form a series of cliffs, and could be the site of a future flank collapse.
The summit of Kizimen is formed by overlapping lava domes, from which blocky lava flows descend the flanks of the volcano.
Kizimen is at the W end of a volcanic chain north of Kronotsky volcano. Kizimen itself was built during four eruptive cycles beginning about 12,000 years ago and lasting 2000-3500 years each, separated by large explosive eruptions about 12000, 8300 and 3000 years ago. In between those major explosive eruptions, lava domes were formed in at least 3 phases.
Another large explosive eruption occurred about 1100 years ago. It produced a lateral blast and created a 1.0 x 0.7 km wide crater breached to the NE, inside which a small lava dome has grown. Before the eruption starting in 2010, the only known historic activity took place in 1927-28. 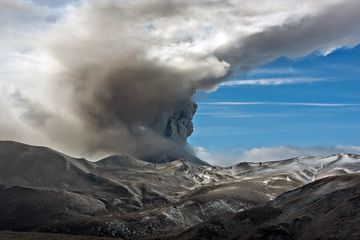 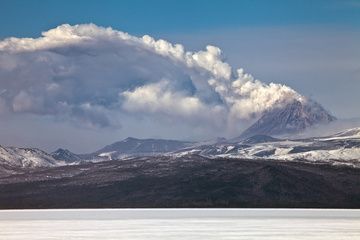 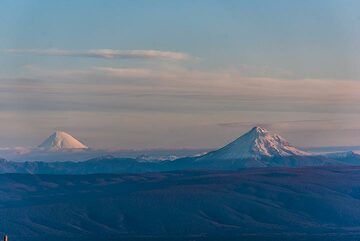 Kronotzky and Kizimen volcanoes in the evening. (Photo: Tom Pfeiffer) 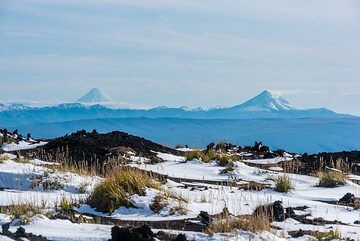 To the SE, the perfect cone of Kronotzky volcano and still steaming Kizimen volcano are visible in the distance. (Photo: Tom Pfeiffer)
More photos

See also: Sentinel hub | Landsat 8 | NASA FIRMS
First visit to our site? If you havn't done it yet, download the Volcanoes & Earthquakes app to get one of the fastest volcano news online:
Android | IOS
Latest news
Fri, 27 Dec 2013, 07:12 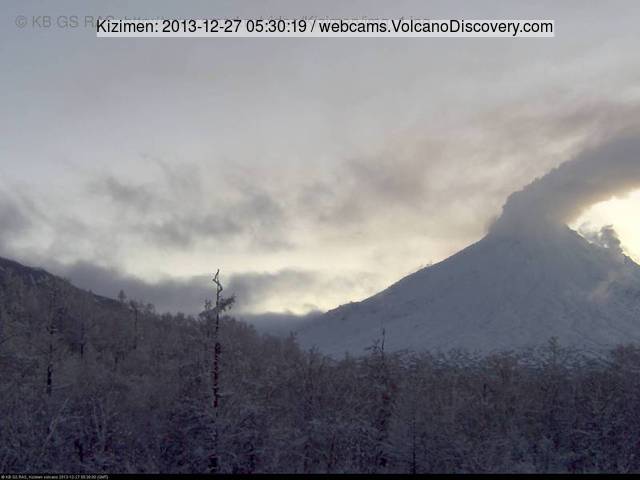 Activity has picked up at the volcano again. An ash plume was reported this morning by VAAC Tokyo to 17,000 ft (5 km) altitude extending north. Webcam images show a significant steam plume which possibly contains ash. Read all
Mon, 9 Dec 2013, 16:06

Activity has been low recently. It appears that the growth of the summit lava dome has paused or stopped. KVERT now keeps the volcano on level "green". ... Read all
Try our free app!

Glossary of geologic terms
A growing list of often illustrated explanations and definitions of geological terms and keywords, with focus on volcanology and seismology.
Countries / regions

Photos from Italy
Italy - the cradle of volcanology. Browse through various photo galleries mainly from its numerous volcanic areas - from Naples to Etna and the Eolian Islands and more.
Sea-Floor spreading

Photos from Kamchatka
Kamchatka in Russia's far east is one of world's remotest regions and has an almost unparalleled density of active volcanoes. Look at photos taken during our expeditions from this wonderful corner of the world!
Get the ad-free version!
Why is there advertising on this site?