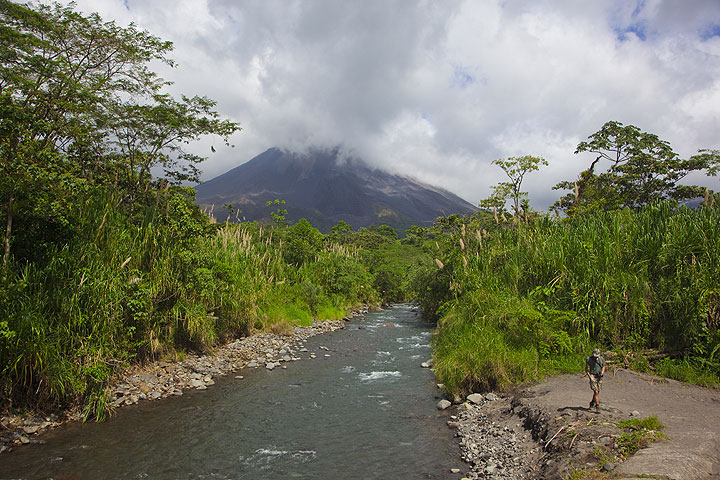 Arenal, a major tourist attraction in Costa Rica, is one of the most active volcanoes of Central America. Since a major eruption in 1968, it has been in near-continuous activity building a lava dome and displaying mild explosive activity from the summit crater.

Volcán Arenal, a beautiful, 1657-m high conical andesitic stratovolcano near Lake Arena, is the youngest and one of the most active stratovolcano in Costa Rica. It is famous for a large explosive eruption in 1968 that killed several people and threw incandescent bombs to 5 km distance from the vent.
Arenal lies along a volcanic chain where activity has migrated to the NW over the past 2 million years, from the late-Pleistocene Los Perdidos lava domes through the Pleistocene-to-Holocene Chato volcano, which contains a 500-m-wide, lake-filled summit crater. The earliest known eruptions of Arenal took place about 7000 years ago, and it was active simulataneously with Cerro Chato volcano until the activity of Chato ended about 3500 years ago.
Growth of Arenal has been characterized by periodic major explosive eruptions at several-hundred-year intervals and periods of lava effusion that armor the cone. Arenal's most recent eruptive period began with a major explosive eruption in 1968. Continuous explosive activity accompanied by slow lava effusion and the occasional emission of pyroclastic flows has occurred since then from vents at the summit and on the upper western flank.
Source: GVP, Smithsonian Institution First visit to our site? If you havn't done it yet, download the Volcanoes & Earthquakes app to get one of the fastest volcano news online:
Android | IOS
Latest news
Wed, 18 Sep 2013, 10:59
Arenal volcano (Costa Rica): increased rockfalls as possible sign of volcano becoming more active
OVSICORI mentioned that rockfalls with rumbling noises have increased at the volcano over the past weeks. This could suggest that the volcano has started to wake up from its 3 years of slumber. ... Read all
Thu, 12 Sep 2013, 08:14
Arenal volcano (Costa Rica) activity update
OVSICORI-UNA reported that plumes composed mainly of water vapor rose from the NE and SE edges of Arenal's Crater C on 8 and 9 September. Tremors indicative of hydrothermal and magmatic activity were detected on 8 September. Read all
Try our free app!

Photos from Germany
Germany has a large number of volcanoes - most of them extinct, but the Eifel volcanic field is still potentially active.
Yellowstone quakes

Ethiopia and the Danakil
Ethiopia is a very diverse and beautiful country. Thanks to our numerous expeditions to Erta Ale and Dallol and beyond, we have an extensive collection of images showing the volcano's lava lake, the desert, the colorful hot springs of Dallol, the vast salt lakes, camel caravans and more.
Dukono

Dukono volcano photos
Dukono on Halmahera in Indonesia has been in permanent activity for years, often producing ash plumes that drift around the northern part of the island and have become normality.
Earthquake Catalog

Look up recent and past quakes worldwide or by selecting an area on the map!
Get the ad-free version!
Why is there advertising on this site?
Support us - Help us upgrade our services!
We truly love working to bring you the latest volcano and earthquake data from around the world. Maintaining our website and our free apps does require, however, considerable time and resources.
We need financing to increase hard- and software capacity as well as support our editor team. We're aiming to achieve uninterrupted service wherever an earthquake or volcano eruption unfolds, and your donations can make it happen! Every donation will be highly appreciated. If you find the information useful and would like to support our team in integrating further features, write great content, and in upgrading our soft- and hardware, please make a donation (PayPal or Online credit card payment).