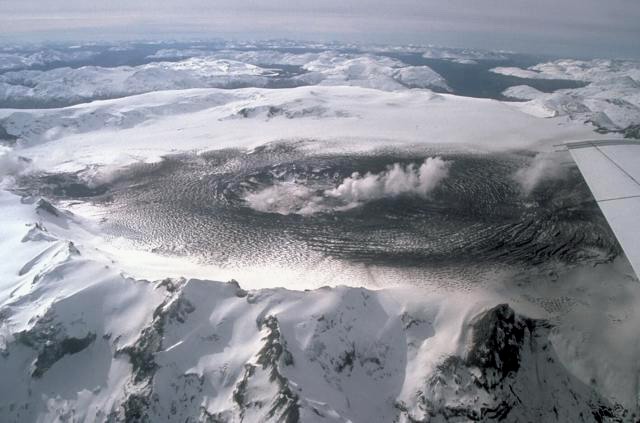 Cerro Hudson volcano in southern Chile is the southernmost active volcano of the Chilean Southern Volcanic Zone caused by subduction of the Nazca plate beneath the South American plate.
The massive Hudson volcano contains a 10 km wide, almost circular ice-filled caldera, which drains into the Huemules glacier to the north. Mudflows have been generated from this glacier down into the Río de Los Huemeles.
2 cinder cones are located north of the volcano. Other flank cones are found on the SW and SE flanks.
The remote volcano was not recognized as such until its first 20th-century eruption in 1971. An eruption in 1991 was Chile's second largest of the 20th century. It formed a new 800-m-wide crater in the SW part of the caldera.

Eruptions of Hudson volcano:
Hudson has been the source of several major Holocene explosive eruptions. At least 12 major explosive eruptions within the past 10,000 years have been identified by tephra layers.
An eruption about 6700 years ago must have been one of the largest known in the southern Andes during the past 10,000 years. Another eruption about 3600 years ago produced more than 10 cubic km of tephra.

Tectonic setting:
Hudson volcano still belongs to the Southern Volcanic Zone, related to the subduction of the Nazca Plate, but it is close to the triple junction of the Nazca-Antarctica-South American tectonic plates and located immediately north of the 300 km long Patagonian Volcanic Gap (46–49°S), where no recent volcanism has occured during the past 8 million years, as a result of the complex subduction of the Chile Rise spreading zone under South America at the Taitao Peninsula.


2007 earthquake
On 21 April, 2007, a magnitude 6.2 earthquake occurred at about 13:50 local time in the Aisén Fjord 50 km north of Hudson volcano. The earthquake is suspected to have triggered the eruption of Chaiten volcano 250 km north of the earthquake epicenter in May 2008.


1991 eruption of Hudson volcano
One of the largest eruption in Chile in the 20th century began from Hudson volcano on 8 August 1991 at 18:20 hr local time.
Phreatomagmatic explosions from a vent in the NW part of the caldera melted a 400 m wide hole in the glacier, and a magmatic phase of lava emission (fountains under the ice) lasted 4 days. Lava flows were erupted from a 4 km long NNE-SSW trending fissure.
The paroxysmal phase of the eruption began on 12 August around noon, producing a Plinian eruption column and forming an 800-m-wide crater 4 km SSE of the first crater. 3-4 hours after the main explosion, a jökullhaup (glacial flood) flowed down the Huemules valley to the coast. The eruption column reached an altitude of 17-18 km on 13 August, and ash fell as far as on the Falkland Islands (Malvinas Islands) 1000 km SE. The ash fall covered 100,000 sq km of southern Patagonia, and more than 1 cubic km of ash fell in Argentina alone.
On 20 August, Australian Airlines flight FL418 (Airbus) en route from Melbourne to Sydney encountered the ash plume in flight. The plume was dilute enough not to cause severe damage, but a strong smell of sulfurous gas entered the aircraft cabin and and was noticed by the crew and passengers.

Effects of the region
The most severe agricultural impacts were recorded in the Los Antiguos Valley 100 km SE of the volcano. Ashfall damaged houses, roads, and water supplies at Los Antiguos village. Its average 250-ton annual crop of cherries was destroyed by the eruption. Snowfall was greater than normal, with the total precipitation of 410 mm, compared to the average of 218 mm. In some areas, 30-40 % of sheep herds were killed, because the sheep were eating ash-covered grass and sometimes because of the the weight of ash of the back of some animals prevented them from standing up. Hndreds of sheep farms were abandoned in the Santa Cruz province of Argentina. There was a fast recovery of orchid crops after 2 years.

Causes of the eruption
The eruption of Hudson volcano was possibly triggered by a mixing of 2 magmas, a hot basaltic magma, which was erupted during the first phase, had been injected into a cooling chamber of trachyandesite magma stored at a depth of 2-3 km. The mixing caused an increase in volume and partial gas pressure and may have triggered the paroxysmal eruption at Hudson on 12 August 1991. 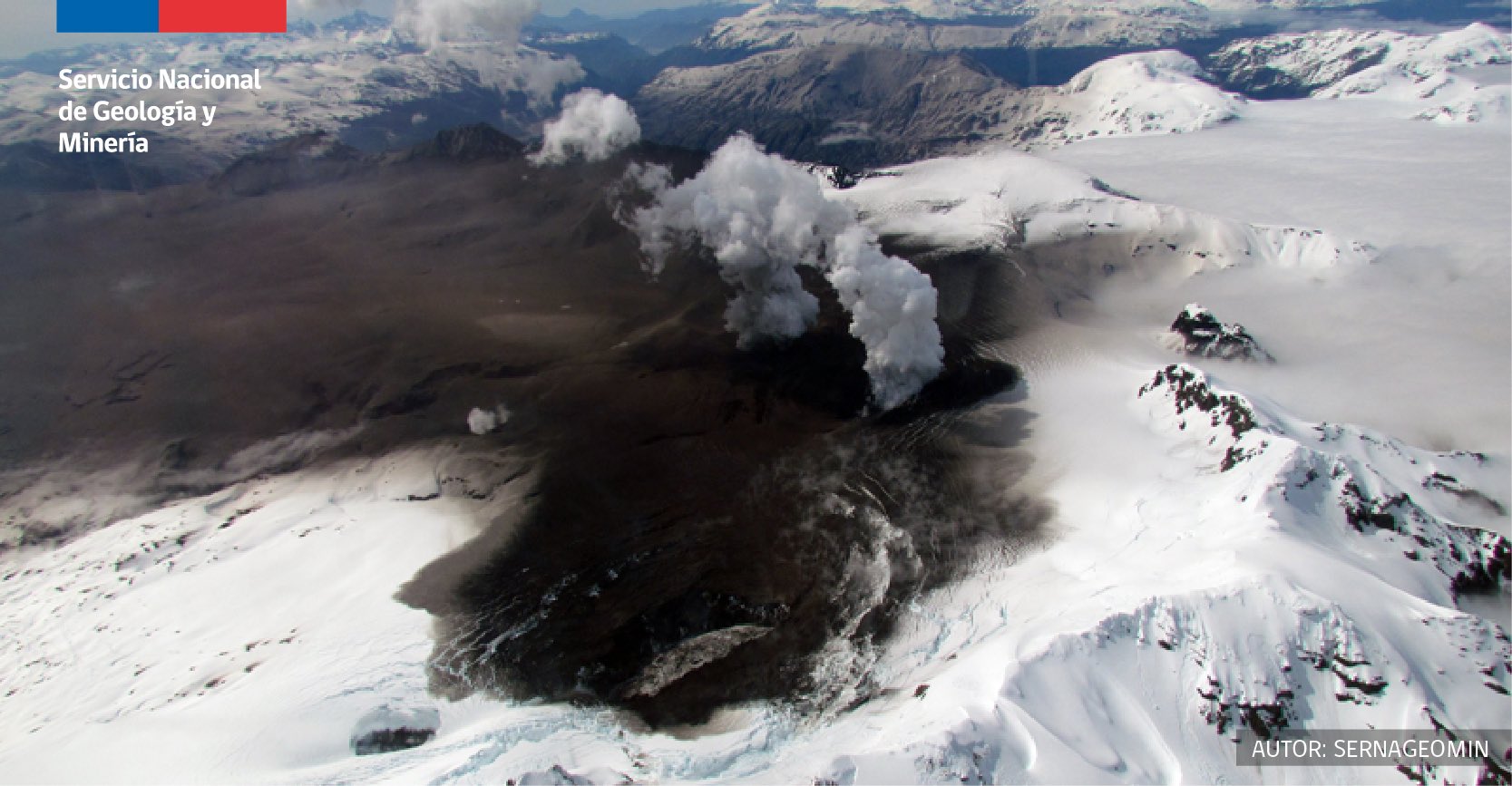 The SERNAGEOMIN local observatory reported a seismic activity at the volcano today. ... Read all
Wed, 8 Sep 2021, 06:00
Cerro Hudson volcano (Chile) - Smithsonian / USGS Weekly Volcanic Activity Report for 8 September-14 September 2021 (Continuing Activity)
SERNAGEOMIN lowered the Alert Level for Cerro Hudson to Green (the lowest level on a four-color scale) on 7 September, based on decreased activity. Neither morphological changes nor thermal anomalies were visible in satellite images or webcam views during 16-31 August. Seismicity remained low and sulfur dioxide emissions were not recorded. ... Read all
Try our free app!

La Palma Volcano Special
We offer a short-notice tour to see the eruption on La Palma in a small group guided by a volcanologist (Evelyne Pradal - English and French speaking geologist.)
Volcanoes of Java 13-29 Aug

Volcano Trekking
A physically active tour to visit and climb some of Indonesia's most active and famous volcanoes: Papandayan and Galunggung in West Java, Merapi in Central Java, Kelud, Semeru, Bromo, the Tengger caldera, and Ijen in East Java.
Largest volcano

Do you know which is the biggest volcano in the world?
Calendars

Volcano Calendars
We have published several volcano calendars over the years: usually, we use photos taken by us or our participants during our recent volcano tours and expeditions. A perfect gift if you're a fan of volcanoes!
Get the ad-free version!
Why is there advertising on this site?
Support us - Help us upgrade our services!
We truly love working to bring you the latest volcano and earthquake data from around the world. Maintaining our website and our free apps does require, however, considerable time and resources.
We need financing to increase hard- and software capacity as well as support our editor team. We're aiming to achieve uninterrupted service wherever an earthquake or volcano eruption unfolds, and your donations can make it happen! Every donation will be highly appreciated. If you find the information useful and would like to support our team in integrating further features, write great content, and in upgrading our soft- and hardware, please make a donation (PayPal or Online credit card payment).