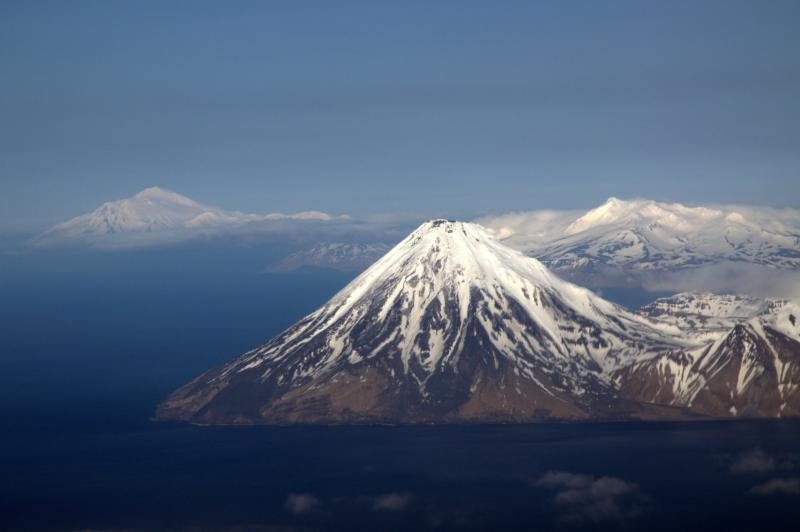 Kanaga Volcano Viewed from the west with Mt Moffet, Adak and Great Sitkin in the background (image taken May 8, 2010 by Cyrus Read, AVO/USGS)

Kanaga volcano is an active symmetrical stratovolcano rising 1300 m on the northern part of Kanaga Island in the western Aleutians, Alaska. It is one of the most southerly volcanoes of the central Aleutian chain.
The volcano has a small 200 m wide and 60 m deep circular summit crater with fumaroles inside the crater and around its rims. Historical eruptions have been recorded since 1763, but not in much detail due to the remoteness of the volcano. A new eruption might have started on 18 February 2012.

Symmetrical Kanaga stratovolcano is situated within the Kanaton caldera at the northern tip of Kanaga Island. It is composed of interbedded basaltic and andesitic lava flows, scoria layers, and pyroclastic rocks.
The rim of Kanaton caldera forms a 760-m-high arcuate ridge south and east of Kanaga; a lake occupies part of the SE caldera floor. The volume of subaerial dacitic tuff is smaller than would typically be associated with caldera collapse, and deposits of a massive submarine debris avalanche associated with edifice collapse extend nearly 30 km to the NNW. Several fresh lava flows from historical or late prehistorical time descend the flanks of Kanaga, in some cases to the sea.
Kanaga is also noted petrologically for ultramafic inclusions within an outcrop of alkaline basalt SW of the volcano. Fumarolic activity occurs in a circular, 200-m-wide, 60-m-deep summit crater and produces vapor plumes sometimes seen on clear days from Adak, 50 km to the east.
(Smithsonian / GVP volcano information)


1906 eruption
Kanaga was seen in eruption 1906 a hunter reported. The eruption was accompanied by earthquakes and lava flows were reported on the east and west side of the steep volcano's cone.


1904 eruption
Not much is known about the eruption of Kanaga volcano in 1904. Historic documents suggest a lava flow on the upper southern flank.
Latest satellite images

See also: Sentinel hub | Landsat 8
Show more
First visit to our site? If you havn't done it yet, download the Volcanoes & Earthquakes app to get one of the fastest volcano news online:
Android | IOS
Latest news
Wed, 7 Mar 2012, 07:22
Kanaga volcano (Aleutian Islands, Alaska), activity update: alert level lowered to normal
After no further signs of restlessness had been detected at Kanaga during the past week, AVO lowered the alert level back to normal (green). ... Read all
Tue, 28 Feb 2012, 11:05
Kanaga volcano (Aleutian Islands, Alaska ) activity update: no further activity detected since the possible eruption on 18 Feb
No unusual activity was observed in seismic data or mostly cloudy satellite images of Kanaga volcano in the past 24 hours. Read all
Try our free app!

Batu Tara photos
A remote island in the Flores Sea of Indonesia formed by a single volcano that has been in strong strombolian eruption for years. We regularly lead expeditions to there where we camp several days to observe it.
Armenia

Photos from Armenia
Armenia is a very photogenic country with a large variety of landscapes showing some very spectacular geology, century-old monasteries and castles, and much more.
Lava fountains

Volcano Expeditions
Witnessing a volcanic eruption from close is an unforgettable experience. We offer a wide variety of tours and expeditions to active volcanoes worldwide.
Ijen flames

Blue flames of burning sulfur
Ijen volcano in East Java has one of the most impressive sulfur deposits on earth. They are so hot that the sulfur often ignites - a mysterious display at night caught on camera.
Get the ad-free version!
Why is there advertising on this site?
Support us - Help us upgrade our services!
We truly love working to bring you the latest volcano and earthquake data from around the world. Maintaining our website and our free apps does require, however, considerable time and resources.
We need financing to increase hard- and software capacity as well as support our editor team. We're aiming to achieve uninterrupted service wherever an earthquake or volcano eruption unfolds, and your donations can make it happen! Every donation will be highly appreciated. If you find the information useful and would like to support our team in integrating further features, write great content, and in upgrading our soft- and hardware, please make a donation (PayPal or Online credit card payment).