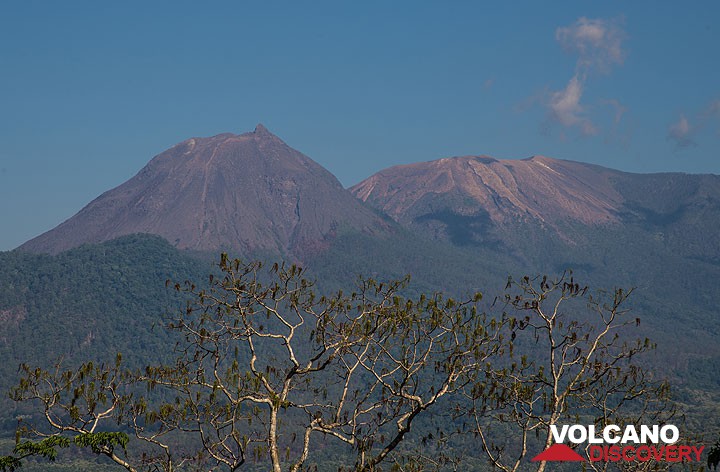 Lewotobi volcano at the eastern end of Flores Island is one of the most frequently active volcanoes in the region. It has two peaks arranged on a NW-SE line separated by 2 km and a 1232 m high saddle. This gave the twin volcano its name Lewotobi "husband and wife" (also spelled Lewetobi).
The two peaks correspond to the Lewotobi Lakilaki and Lewotobi Perempuan stratovolcanoes. Lewotobi Lakilaki (1584 m) has a summit crater of 400 m diameter open to the north. Lewotobi Perampuan (1703 m)'s crater is 700 m wide.

Lewotobi Lakilaki has been frequently active during the 19th and 20th centuries, while the taller and broader Lewotobi Perempuan has erupted only twice in historical time. Small lava domes have grown during the 20th century in the summit craters of both volcanoes. A prominent flank cone, Iliwokar, occurs on the east flank of Lewotobi Perampuan. 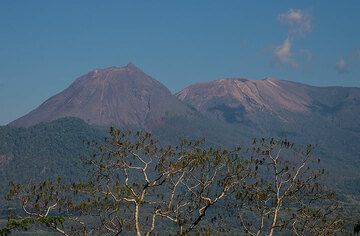 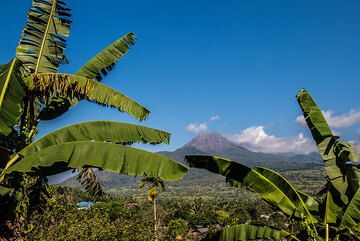 2003 eruption
Lewotobi volcano erupted on 30 May 2003. Ash plumes were seen 200 m above the summit and light ash fall occurred at the observatory 5 km from the crater. Small eruptions continued in June and July, producing ashfall in the villages of Bawalatang, Duang, and Boru.
On 31 August, a more powerful explosion produced an ash plume to a height of ~2.5 km above the summit that drifted W, incandescent lava bombs ignited forest fires up to 1 km radius from the crater. Ash fall damaged crops on nearby farmland. Following that 2003 eruption, according to the daily Jakarta Post, at least 565 villagers living on the slopes of Lewotobi were affected by sulfur and ash emissions. The residents experienced respiratory problems and skin afflictions.
The eruption ended sometime in October.
---
Source: GVP monthly activity reports


1999 eruption
Small ash explosions began at Lewotobi volcano on 21 March 1999.
The activity consisted typically of weak steam and ash emissions reaching a few 100 m above the summit, sometimes interrupted by more powerful explosions. In April and May, mild strombolian activity with visibly incandescent lava was observed, ejecting bombs to 50-75 m above the crater. A stronger explosion, accompanied by a blast, occurred on 1 July 1999. The explosion threw glowing bombs to more than 500 m distance from the crater, igniting forest fires that burnt vegetation up to 2.5 km north of the volcano. Minor ash fell occurred in an 8 km radius, including the villages of Boru, Bawalatang, and Watukubu.
No reports of further activity after July are available, when the eruption probably started to die out.


1991 eruption
Mild eruptive activity resumed at the summit crater in the first half and until around July/August of 1991. Mild ash emission and strombolian activity was observed between March-July. The highest reported ash plumes reached about 800 m and incandescent material reached 100 m height above the crater. It was reported that hot ash fall (smelling of sulfur) onto nearby areas caused residents to flee during eruptions in July.


1939 eruption
Lewotobi volcano erupted on 17 December 1939, exactly 6 years after the start of the previous eruption. It is reported that the eruption caused lapilli fall "like hen eggs" at the Hokeng mission post for 10 minutes. 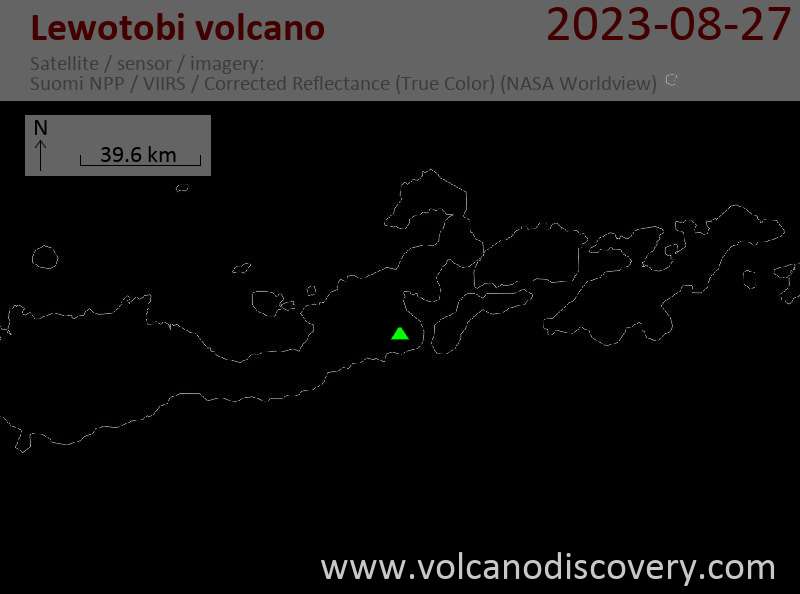 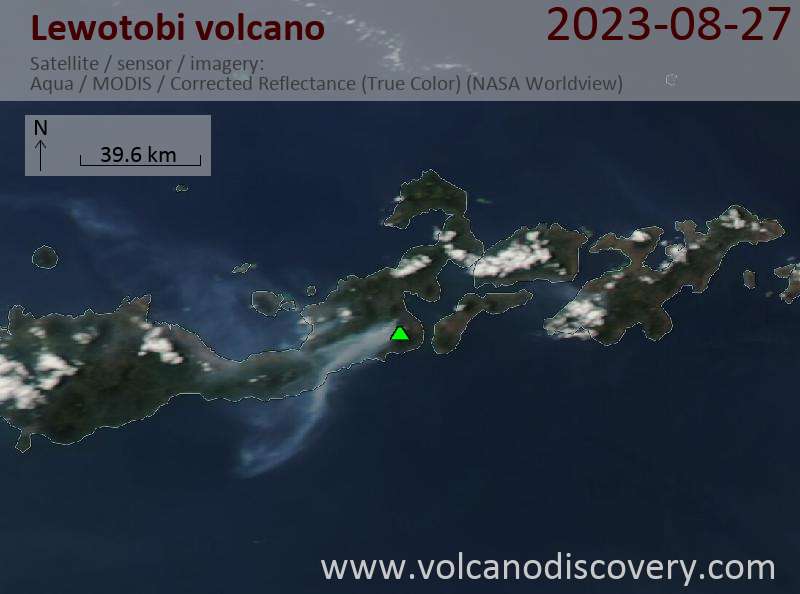 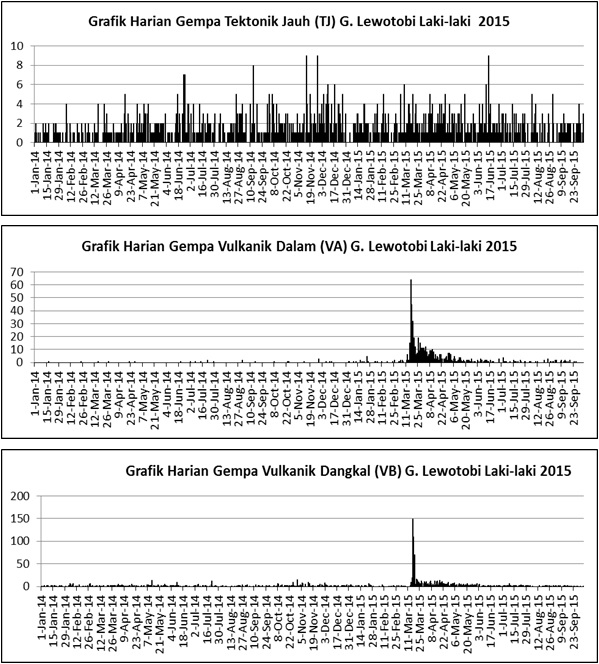 The official alert level of the volcano was lowered back to "normal" on 7 Oct. The Lewotobi Laki-Laki stratocone been showing signs of unrest (increased volcanic earthquakes during March-May this year), but seismic activity has since then returned and remained at normal background levels. ... Read all
Wed, 7 Oct 2015, 06:00
Lewotobi volcano (Flores Island, Indonesia) - Smithsonian / USGS Weekly Volcanic Activity Report for 7 October-13 October 2015 (Continuing Activity)
PVMBG reported that white plumes were observed rising 15 m above Lewotobi during periods of clear weather from 1 Septmber-6 October. Seismicity declined significantly during the previous three months and became stable. The Alert Level was lowered to 1 (on a scale of 1-4) on 7 October. ... Read all
Try our free app!

Popocatépetl Volcano Special
The activity of Mexico's most active and largest volcano has been picking up gradually during the past months. If you like to join a small group of volcano enthusiasts, join us, stay 5 nights near the volcano and move around for extended day- and night-time observation.
Volcano News

Volcano News group
Join our group on facebook: post reports, updates, or other interesting facts about volcanism and volcanic activity worldwide and discuss with other members.
Italy

Photos from Italy
Italy - the cradle of volcanology. Browse through various photo galleries mainly from its numerous volcanic areas - from Naples to Etna and the Eolian Islands and more.
Volcanoes of Java 13-29 Aug

Volcano Trekking
A physically active tour to visit and climb some of Indonesia's most active and famous volcanoes: Papandayan and Galunggung in West Java, Merapi in Central Java, Kelud, Semeru, Bromo, the Tengger caldera, and Ijen in East Java.
Dallol

Photos of Dallol
Look at one of the most surreal landscapes on Earth, created by hot springs, colorful salt deposits and volcanic gas vents.
Get the ad-free version!
Why is there advertising on this site?
Support us - Help us upgrade our services!
We truly love working to bring you the latest volcano and earthquake data from around the world. Maintaining our website and our free apps does require, however, considerable time and resources.
We need financing to increase hard- and software capacity as well as support our editor team. We're aiming to achieve uninterrupted service wherever an earthquake or volcano eruption unfolds, and your donations can make it happen! Every donation will be highly appreciated. If you find the information useful and would like to support our team in integrating further features, write great content, and in upgrading our soft- and hardware, please make a donation (PayPal or Online credit card payment).