Updated: May 20, 2022 12:34 GMT - Refresh
Each volcano in Indonesia is listed that has erupted within the past 10,000 years as well as many older ones active in the Pleistocene. Please navigate on the map or the volcano list below to get more information about an individual volcano.

The archipelago of Indonesia consists of more than 13,000 islands, spread over an area that is similar in size to that of the continental United States. It is the country with the greatest number and density of active volcanoes.

Most volcanoes in Indonesia belong to the Sunda Volcanic Arc, streching over 3,000 kilometers from NW Sumatra to the Banda Sea. This volcanic arc results from the subduction of Indian Ocean crust beneath the Asian Plate and includes 76% of the region's volcanoes. To the NNW, the basaltic volcanism of the Andaman Islands results from short spreading centers, and to the east the Banda Arc reflects Pacific Ocean crust subducted westward. North of this arc, the tectonic setting is much more complex: several fragments of plates are converging  to form multiple subduction zones, mainly oriented N-S. These produce the Sulawesi-Sangihe volcanoes on the west and Haimahera on the east of the collision zone.

Indonesia leads the world in many volcano statistics. It has the largest number of historically active volcanoes (76), its total of 1,171 dated eruptions is only narrowly exceeded by Japan's 1,274, although not much is know about the volcanic activity in the time before European colonialists arrived from the 15th century on. Indonesia has suffered the highest numbers of eruptions producing fatalities, damage to arable land, mudflows, tsunamis, domes, and pyroclastic flows. Four-fifths of Indonesian volcanoes with dated eruptions have erupted in this century.

Two of the most devastating volcanic eruptinos in historic time took place in Indonesia: the enormous eruption of Tambora in 1815,- the largest known eruption of the world during historical times,- had such far-reaching effects on the climate that for instance Europe was to experience 1816 as the year without summer. In 1883, the disastrous eruption of Krakatau carved itself deeply into the collective memory of mankind. The eruption of Krakatau was followed by severe tsunamis that killed about 30-40,000 people.

In 1920, a volcano survey was established by the Dutch-led government, leading to much improved volcano monitoring and reporting. The Volcanological Survey of Indonesia (VSI) now operates a network of 64 volcano observatories continuously monitoring 59 volcanoes. 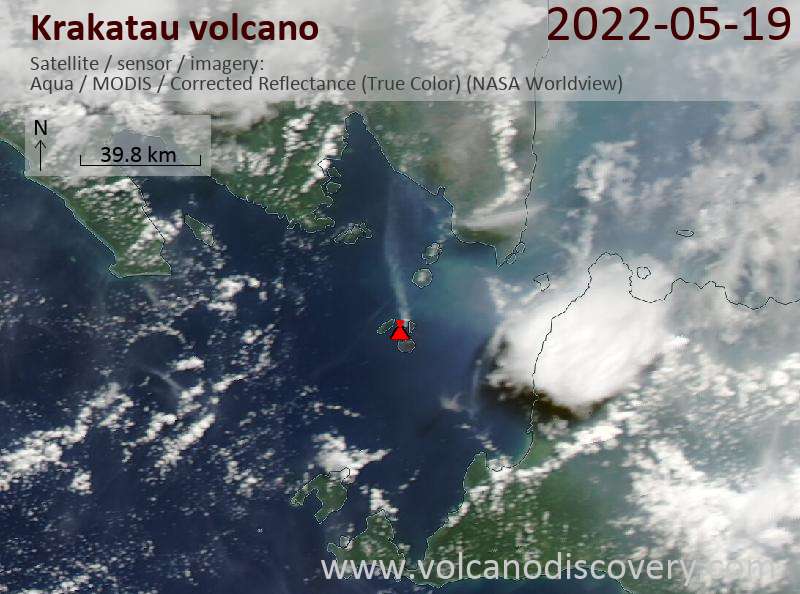 Top 20 quakes in 2016
Several magnitude 7 quakes occurred in 2016 (but none above M8): Papua New Guinea, NZ, Ecuador, Solomon Islands, Sumatra, Chile, Alaska and others - nearly all major earthquakes were located near active subduction zones.
See the top 20 list of largest quakes in 2016 with this map.
Vulkane Italiens

Anatomy of a vulcanian explosion
A violent vulcanian-type explosion from Anak Krakatau in pictures step by step.
Volcano Calendar 2020

Land of Theseus
The Saronic Gulf opposite Athens is one of the most beautiful and interesting areas of Greece, full of beautiful landscapes, small towns, islands, archeological remains and one of Europe's least known active volcanic areas. Join us on a relaxing tour to discover this fascinating area!
Get the ad-free version!
Why is there advertising on this site?
Support us - Help us upgrade our services!
We truly love working to bring you the latest volcano and earthquake data from around the world. Maintaining our website and our free apps does require, however, considerable time and resources.
We need financing to increase hard- and software capacity as well as support our editor team. We're aiming to achieve uninterrupted service wherever an earthquake or volcano eruption unfolds, and your donations can make it happen! Every donation will be highly appreciated. If you find the information useful and would like to support our team in integrating further features, write great content, and in upgrading our soft- and hardware, please make a donation (PayPal or Online credit card payment).