[hide map]
Ambrym | Aneityum | Aoba | East Tanna Volcano | Emae | Epi | Fatmalapa | Gaua | Kuwae | Lopevi | Melkum | Mere Lava | Merig | Mota | Motlav | North Vate | Paama Island | Pumpan | Suretamatai | Traitor's Head | Unnamed | Unnamed 16.992°S/168.592°E | Ureparapara | William | Yasur
Show interactive Map
[hide mapshow map] [enlarge]
The Vanuatu archipelago in the South Pacific is not only one of the most unspoilt and intact places of the earth, but also hosts some of the most spectacular volcanoes.
The Vanuatu archipelago contains many active volcanoes including Ambae, Ambrym, Lopevi, and Yasur, the Stromboli counterpart of the Mediterranean. Vanuatu's island arc is the result of a north-south subduction zone streching from the Matthew and Hunter islands in the south to Tinakula volcano in the Solomon Islands in the north.
Its friendly inhabitants are strongly rooted in their extotic traditional culture and welcome visitors warmheartedly as almost nowhere else. Vanutatu's tropical islands are not only the perfect location for a relaxing tropical holiday, but also offer the possibility for adventurous expeditions to some of the most active and spectacular volcanoes of the world, including the frequently active lava lakes of Ambrym and the famous, constantly erupting volcano Yasur on the Island of Tanna. 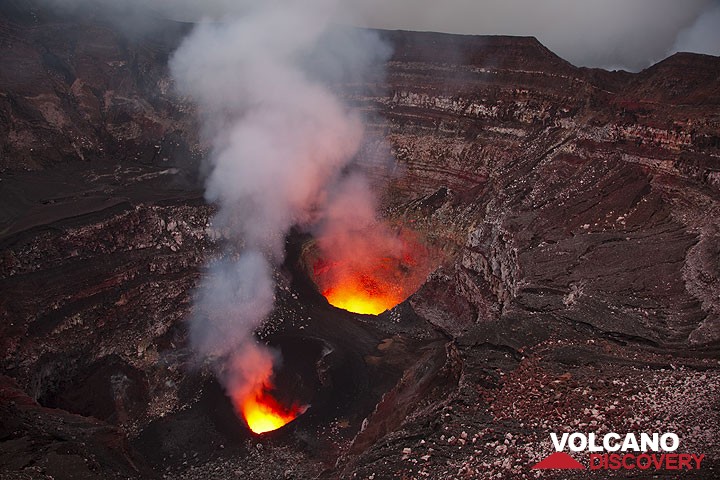 The crater of Benbow (Ambrym)
Ambrym is a large basaltic volcano with a 12-km-wide caldera. It is not only one of the most active volcanoes of Vanuatu, but in the world. Its most active craters often contain small lava lakes. [more]

(Shield volcano 1496 m / 4,908 ft)
Aoba, also known as Ambae, is a massive 2500 cu km basaltic shield volcano that is the most voluminous volcano of the New Hebrides archipelago. [more]

(stratovolcano 797 m / 2,615 ft)
Gaua is one of the most remote and most active volcanoes of the Vanuatu archipel, located on the island with the same name in the West Banks island group atht enorthern end of the archipelago. Its most recent eruption started in Sep 2009 from Mt Garet inside the caldera lake and ... [more]

The majestic cone of Lopevi volcano from the air
Lopevi is one of Vanuatu's most active volcanoes. It forms a steep cone rising to more than 1400 m from the sea and often has eruptions from the summit crater or flank vents. The island was evacuated following major eruptions in 1939 and 1960. [more] 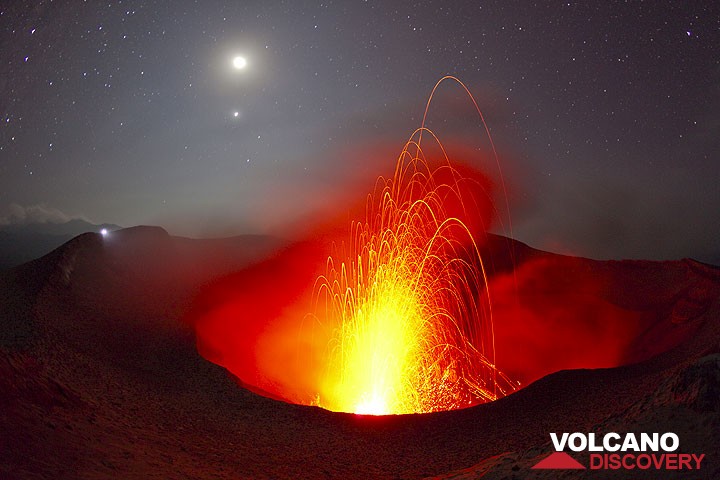 Strombolian activity at Yasur volcano
Yasur is the most well known volcanoes of Vanuatu and one of the most active volcanoes in the world. Yasur is known for its spectacular persistent strombolian activity that consists of regular small to violent explosions from one or several vents. [more]
First visit to our site? If you havn't done it yet, download the Volcanoes & Earthquakes app to get one of the fastest volcano news online:
Android | IOS

On 31 August Vanuatu Meteorology and Geohazards Department (VMGD) reported that activity at Yasur continued at a high level of “major unrest,” as defined by the Alert Level 2 status (the middle level on a scale of 0-4). Ash-and-gas emissions and loud explosions continued to be recorded, with bombs falling in and around the crater. The public was reminded to not enter the restricted area within 600 m around the cone, defined by Danger Zone A on the hazard map. ... Read all
Wed, 14 Sep 2022, 14:00

On 31 August the Vanuatu Meteorology and Geo-Hazards Department (VMGD) reported that the cone in Ambae's Lake Voui continued to produce emissions consisting of steam, volcanic gases, and possibly occasional ash. The Alert Level remained at 2 (on a scale of 0-5) and the public was warned to stay outside of the Danger Zone, defined as a 2-km radius around the active vents in Lake Voui, and away from drainages during heavy rains. ... Read all 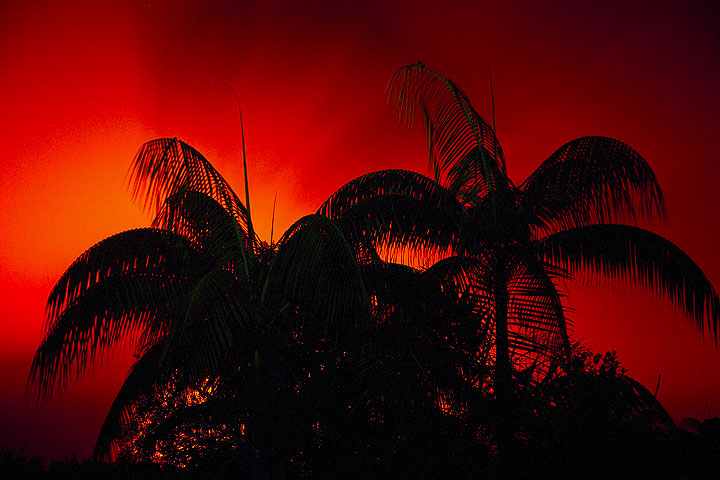 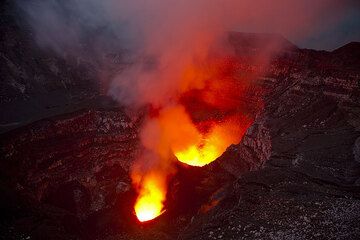 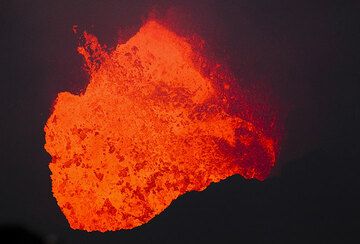 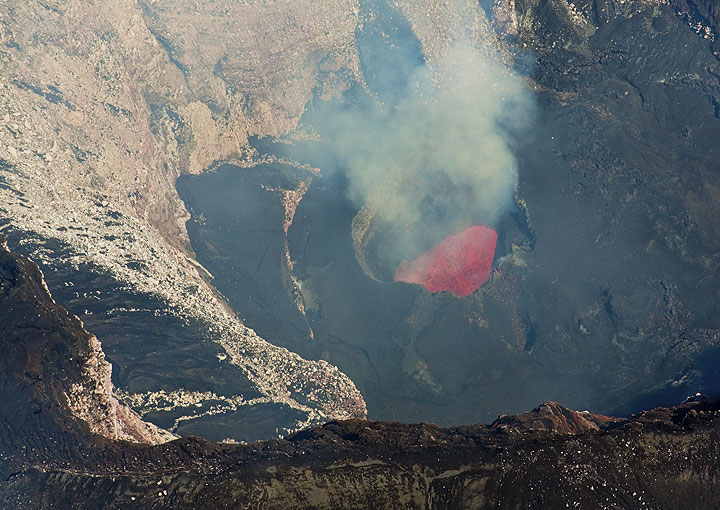 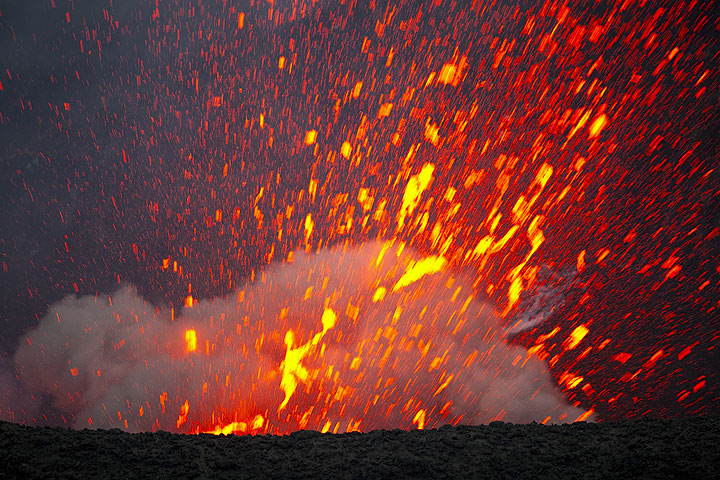 Glossary of geologic terms
A growing list of often illustrated explanations and definitions of geological terms and keywords, with focus on volcanology and seismology.
Volcano Videos

Photos from Kamchatka
Kamchatka in Russia's far east is one of world's remotest regions and has an almost unparalleled density of active volcanoes. Look at photos taken during our expeditions from this wonderful corner of the world!
Kelut eruption 13 Feb 14

Volcano Calendar 2013
Our first printed volcano calendar, featuring a paroxysm of Etna, a vulcanian explosion of Krakatau, and much more!
Get the ad-free version!
Why is there advertising on this site?